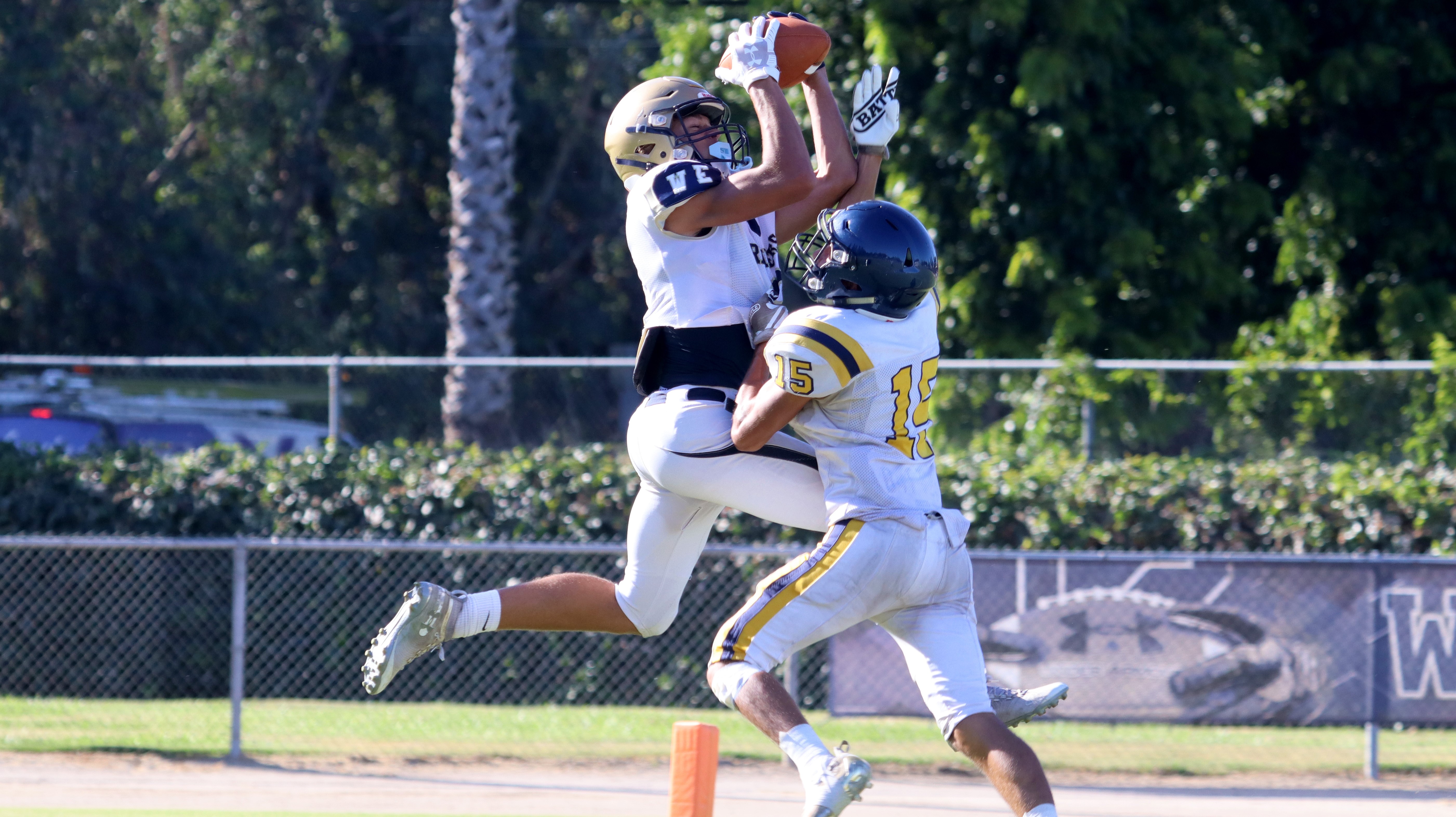 The top 10: Here's the check-list to begin the 2022 high school football season

The 2022 high school football season begins Friday night, and these are the 10 important things to know.

1. FAST START — An attractive list of season-opening games is anchored by a special night at Merced. The Bears officially will open their long-awaited $6.5 million Cathie Hostetler Stadium against reigning Sac-Joaquin Section Division II and NorCal champion and state finalist Central Catholic. It will mark the first time the Bears have enjoyed a true home game.

There’s no better way to unveil a state-of-the-art venue. Both programs are decorated like few others. Merced reached the Section D-IV title game last year while the Raiders made their dramatic run to the state final.

For Central Catholic, it’s only the start of a brutal non-league schedule against the Bears, St. Francis of Mountain View, St. Mary’s of Stockton, Serra of San Mateo and St. John Bosco of Bellflower. That should provide enough preparation as the Raiders defend their Valley Oak League title and, just maybe, advance to the Division I section bracket for the first time.

Nichelson, 6-foot-3 and 210 pounds, is seldom not the best player on the field. And he’s often the best by a wide margin. The numbers he compiled as a junior did not require a hammer: 1,876 rushing yards, 2,316 total yards, 44 touchdowns and 11 2-point conversions. It is his sideline-to-sideline chasedown of opposing ball carriers, however, that has many college teams hoping to land him. He’s reportedly whittled the long list to three: UCLA, Oregon and Florida State.

Such are the spoils for a Cal-Hi Sports first-team preseason selection who also is ranked as the 11th best overall player. Because of Nichelson, Manteca will vie for its fourth section title in five years. But this season, the Buffaloes have been promoted to Division II. They’ll kick off at home against Vista del Lago.

3. END OF AN ERA? Oakdale High has averaged 10 victories per season for 27 years. The Mustangs excelled long before Trent Merzon took charge of the program, but all he and his staff did was build on that success. Merzon, a former Oakdale star, enters his 23rd season with a personal won-loss record of 219-56-1, 13 VOL titles, four section titles, two state finals appearances and the state crown in 2016. The Mustangs are especially proud of their 4-3 record vs. Central Catholic since the Raiders rejoined the VOL.

As for the head coach, it is a poorly-kept secret that this season could be his last. He won’t make an announcement until January.  Until then, he’ll let his talented team make its statement.

“We’re going to be a typical Oakdale team that will get better as the season goes along,” Merzon said. “We have four or five kids who can really run. It is a great group.”

4. RULE CHANGES — The high school rules finally are getting up to speed on intentional grounding. Before, quarterbacks had to direct the ball near a potential receiver to avoid the penalty. Effective this year, quarterbacks can exit outside the tackle position and throw it away as long as the pass reaches the line of scrimmage.

“This is one of the biggest changes in the last 10 years,” said Modesto veteran referee Frank Bispo, the current vice president and past president of the Northern California Officials Association. “We’re getting more in line with the upper levels. We don’t want the quarterbacks to be hit all the time.”

Safety also is addressed in the revised rule regarding double-team blocks. If the lower blocker engages below the waist while his teammate is blocking the shoulders, it will be considered a chop block.

“It means basically that high school double-teams must be high-high or low-low,” said Bispo, a four-sport prep official who also instructs first-year football officials. “This also should be easier to see.”

Bispo also said the overall point of emphasis this year is sportsmanship, which applies to everyone—players, coaches and spectators.

5. QB CLUB — The Modesto Quarterback Club, a fixture on the local high school football scene since 1930, will move to a new home for its weekly lunch-meeting this season. Its new venue will be Denny’s Restaurant, 1525 McHenry Ave. (not far from Doctors Medical Center), replacing the club’s traditional home at the former Coaches Corner.

The club’s mission is to support the local programs and to provide an interaction between coaches, parents, fans and media. Different teams will be honored each week. Sponsorship information is available on the Modesto Quarterback Club’s site on Facebook.

6. HILMAR ANNIVERSARY — The Hilmar Yellowjackets, one of the reasons why the Trans-Valley League is the state’s best small-schools conference, will celebrate their 100th football anniversary this fall.

At each home game, Hilmar will honor some of its best teams ,including the four that won section titles under veteran coach Frank Marques.  The Hilmar school bell also will ring on one of those special Friday nights for Jerry Van Lengen, a long-time successful coach who preceded Marques.

7. TURLOCK — Turlock did not lose a conference game from 2016 until last fall’s 3-2 record in the CCAL. The Bulldogs’ 4-7 overall record didn’t sit well with coach James Peterson, who has welcomed a former star to his staff.

Nothing will be easy for Turlock, however, at home against Rocklin.

8. COUGAR TRACKS — Escalon, another of the TVL heavyweights, pursues its third straight section title with talent across the board. Quarterback Donovan Rozevink will distribute to running backs Logan Anderson and Ryker Peters and receiver Owen Nash.

Matthew Baptista, another skilled running back, may miss the opener at Damonte Ranch (Nev.) due to an injury.  Coach Andrew Beam no doubt has found his stride as successor to the very successful Mark Loureiro. A case in point is the Cougars’ combined record over their last two full seasons: 26-3.

9. ARGONAUT GLORY — Name the other section team besides Vanden to win a state title in 2021. Answer: Argonaut of Jackson, which went 12-3, claimed its first section title since 2004, then dumped St. Vincent de Paul of Petaluma for the NorCal title and Quartz Hill of Lancaster for the CIF 6-AA title. Not only did the Mustangs win the big prize – the first by a Mother Lode League football team -- they celebrated in style with parades in both Ione and Jackson.

And waiting in the wings is, by the way, the defending MLL champion Sonora Wildcats. They’ll feature lineman Roger Alderman, a state third-team preseason selection.

10. BRET HARTE IS BACK  — No one rejoiced when historic Bret Harte High, established in 1905 and named for the American poet, did not field a football team due to a shortage of players last fall. In fact — between the pandemic and the numbers issues — no varsity games have been played at Dorroh Field in three years.

A new era starts Friday night when the Bullfrogs travel to Liberty Ranch of Galt. It will be the varsity debut for everyone, which means football is back at Bret Harte. Coach Kelly Osborn and the Bullfrogs might benefit from fielding only a junior varsity team in 2021. It went 4-4 and was competitive in every game. Watch for rugged fullback-linebacker Dakota Stephens, a CIF state wrestling qualifier as a junior.

After three games on the road, Bret Harte finally will play beneath its own lights on Sept. 16 against Millennium.