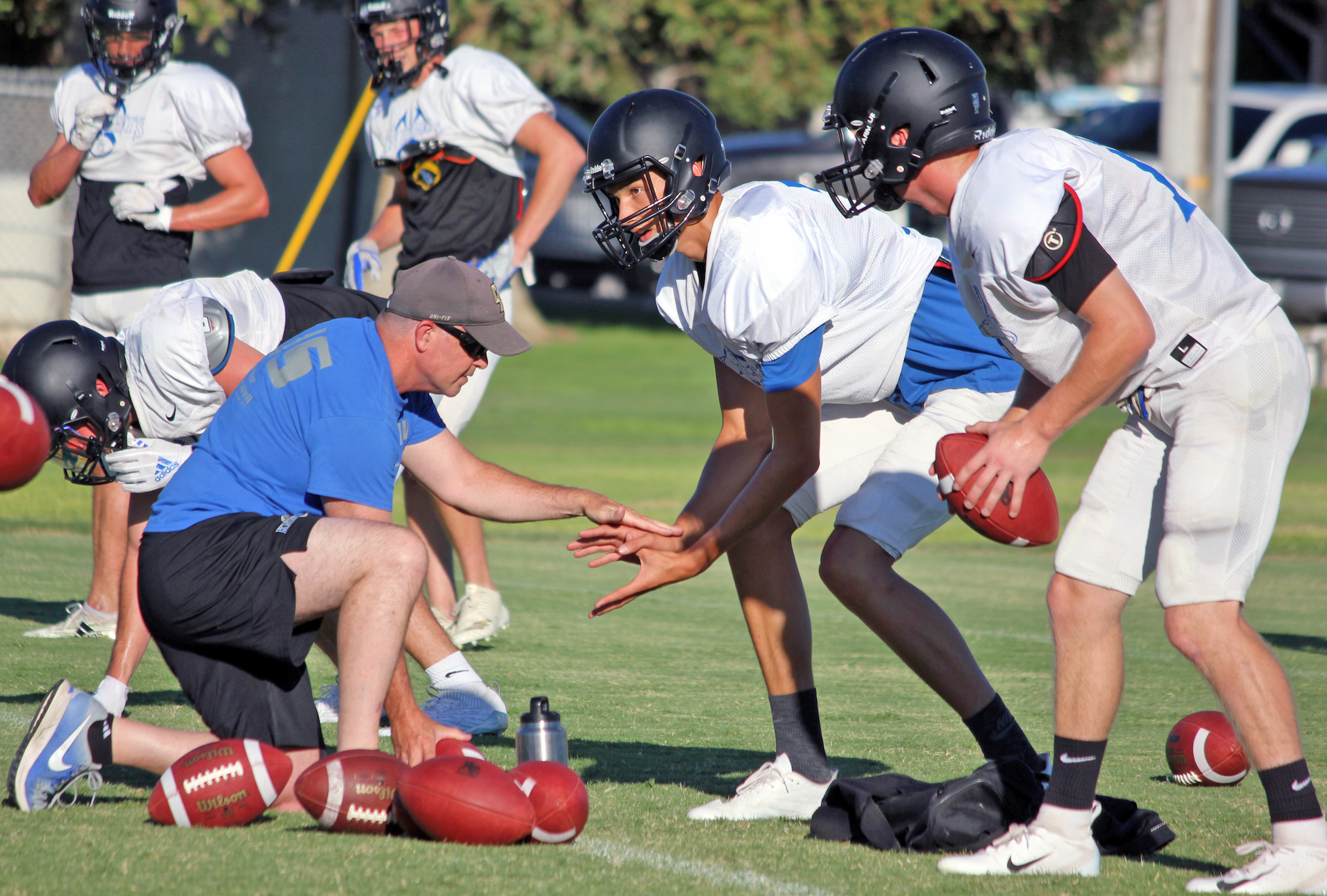 Ripon Christian quarterbacks Cade Alger and Nolan Lingley have collaborated on the Knights' 3-0 start. None of the games have been close. (Sean Kahler Photography)

Trouble in foothills, Southern uncomfort, and the ultimate run-stopper: injuries.

As the calendar flips, it's time to start studying implications and how they may affect league races and playoff positioning.

There was one particular result on Friday evening that was telling — and finished like a shot across a three-time defending league champion's bow: Ripon Christian 30, Summerville 3. The Bears edged Mariposa one week earlier, and the Grizzlies were expected to challenge Orestimba's stronghold in the Southern League.

Even though a last-minute loss to Golden Sierra knocked Orestimba from the ranks of the unbeaten on Friday, anticipation mounts for its clash with league rival Ripon Christian on Sept. 28. The Warriors have won three straight league titles, but the Knights have gone deeper in the postseason. Ripon Christian reached the Sac-Joaquin Section Division VII final last fall, losing to Rio Vista. As a league champion, Orestimba has been placed in tougher divisions, losing to Sonora (D-V champion), Amador (D-VI champion) and Colfax (D-V finalist) the last three years.

Like two runaway trains traveling the same track, these two barrel toward one another. Ripon Christian hasn't shied away from expectation. The Knights are loaded offensively, and blessed with experience across both lines. They're also motivated by a 40-0 loss pinned on them by Orestimba, and have attacked their schedule with purpose, blowing through Millennium, Stone Ridge Christian and now Summerville.

While it might be in the Knights' best interest to finish second in league and draw a top seed in the D-VII playoffs, Ripon Christian wants Orestimba's crown and this may be the year to pull off the heist. Through three weeks, the Warriors have yet to put together a full game: they trailed Bret Harte early; went scoreless in the second half against Hughson; and then gave up a five-point lead late to Golden Sierra.

Trouble in the foothills

In 2015, Sonora won a section championship and hosted a CIF State Northern California regional bowl. In 2016, Amador caught fire in the postseason, winning a Division VI section banner, and then they defeated Lincoln in a regional play-in game and Mendota in the Division VI-AA regional bowl. Last fall, Sonora and Calaveras were the Nos. 1 and 2 seeds, respectively, in the Division V section playoffs.

That three-year run established the Mother Lode League as the region's preeminent small-school league, but what has become of the foothill programs in 2018? Entering the fourth week of the season, the Mother Lode is in danger of not having a team inside the Front Row's small-school poll. That never happens.

Sonora and Calaveras are winless and the Wildcats, a fountain of points the last few years, went nearly 12 quarters without a point.

Amador has won all three of its opponents against inferior opponents: Davis, Livingston and Liberty Ranch have a combined record of 3-6. With games against two winless teams on the horizon (Union Mine and Arroyo), Amador should be 5-0 going into their league opener at Calaveras.

Argonaut is the only other MLL  team above .500. The Mustangs won their first two games, but struggled to score in a loss to short-handed Hughson.

As we inch closer and closer to the start of league play, these are the questions collecting like clouds in the foothills: Is Sonora's streak of four consecutive league titles in jeopardy? With three of the Front Row region's top-50 returning players in their offensive huddle, when will the Wildcat offense finally erupt? After pushing Orestimba in their season opener, can Ryan Kraft and Bret Harte take advantage of Sonora and Calaveras' struggles? Without a Byrd under center, where will Calaveras' offense come from?

Playing through the pain

On paper, Charles "Action" Jackson is off to a hot start for Atwater, which is enjoying the sunny side of .500 after a few dark years. The Falcons whipped Davis, 60-36, improving to 2-1 under second-year coach Seneca Ybarra. Jackson's name appears all over the box score; he had touchdown runs of 70 and 67 yards. Upon closer look, though, "Action" Jackson didn't get much action after all.

"Right now, we got a lot of guys contributing, so there's no need to run Charles into the ground," Atwater coach Seneca Ybarra

He is one of a few running backs in the Front Row region playing through pain. Jackson, who had 154 yards on just four carries, was limited by a nagging ankle injury. Ybarra won't even run his star through the tight spaces at the line of scrimmage, because he doesn't want to make the injury any worse. For the season, Jackson has 454 yards on 28 carries. "He's not even healthy yet," Ybarra said. "I'm hesitant to put him in the A-gap, because someone is going to roll him up. Right now, we got a lot of guys contributing, so there's no need to run Charles into the ground."

Another running back feeling the effects of a tough schedule is Central Catholic's Dawaiian McNeely, who didn't carry the ball in the Raiders' 33-20 victory over St. Mary's. McNeely suffered a shoulder injury in a loss to De La Salle and was seen leaving the game with his arm in a sling. The 6-foot-2 national recruit was relegated to defensive duties on Friday.

Manteca was also without the talents of its top back, Trabron Russell, who set a school record for single-game yardage in a shootout loss to Downey. Russell rushed for 277 yards and five TDs against the Knights, but left Friday's cross-sectional clash with Granada of Livermore before the half with a high ankle sprain. Manteca coach Mark Varnum said Russell will be re-evaluated on Monday.