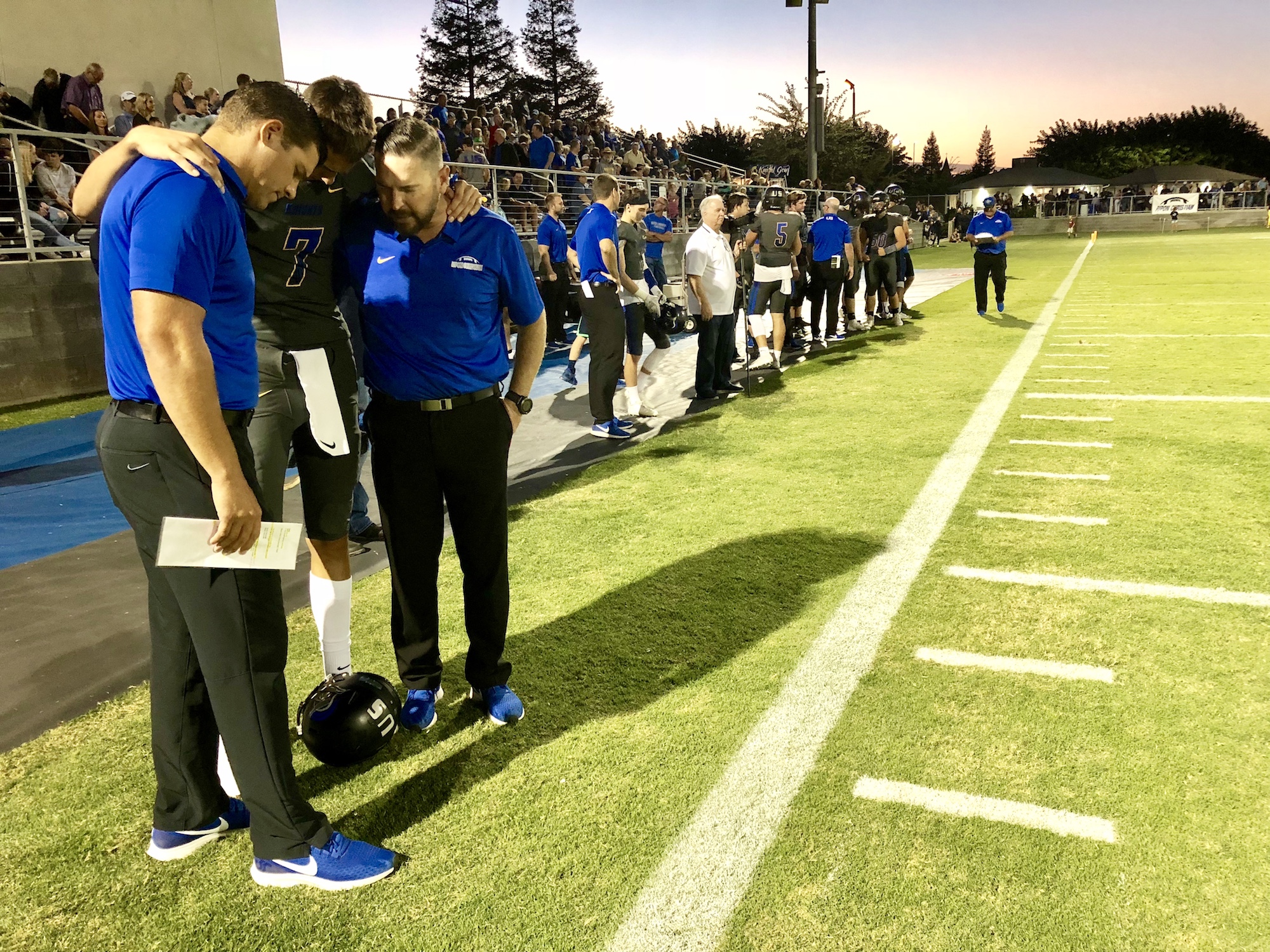 Ripon Christian coach Trey Ozenbaugh (right) and offensive coordinator Randy Fasani (left) share a moment with starting quarterback Cade Alger, who was knocked from the game in the fourth quarter of 23-17 victory over Orestimba on Friday, Sept. 28, 2018. (James Burns)

RIPON — The Southern League title could be headed north for the first time in six years. The transfer of power was completed Friday evening following a late-game barrage by a team held together by stitches and Band-Aids, grit and guts.

Short-handed Ripon Christian shut out three-time defending champion Orestimba over the final 15 minutes and quarterback Jacob Van Groningen, a third-string option to start the week, engineered the game-winning drive with less than 30 seconds left to complete a thrilling 23-17 victory.

“We fought until the final whistle,” Van Groningen said.

The Knights scored 15 points in the final six minutes to snap the Warriors’ 23-game league winning streak. Orestimba hadn’t lost a Southern League game in four calendar years, not since Nov. 7, 2014. During that stretch, Orestimba was 3-0 against Ripon Christian, including a 40-0 thrashing in Newman last fall.

The Knights have used that loss as motivation for the 2018 season, and the joy after Friday’s final whistle was palpable. Defensive coordinator Eddie Erdelatz was moved to tears in the postgame huddle and offensive coordinator Randy Fasani, a co-coach on the Knights' 2012 Southern League co-championship team, was a man of few words. “I’m ready to party,” he told the players.

Ripon Christian coach Trey Ozenbaugh thanked his team for being coachable and cool under pressure, and then turned them loose to the largest regular-season crowd in school history. Just like that, the party was on — and well-deserved.

Van Groningen completed 3 of his 5 passes for 44 yards as Ripon Christian staved off defeat, converting three improbable fourth downs. Before he was knocked from the game with an apparent rib injury, starter Cade Alger found Sean McGovern for 21 yards on fourth-and-18, absorbing contact as he released the ball.

Four plays later, Ripon Christian’s hopes were extended by a facemask penalty on fourth-and-22, nullifying an incomplete pass. Then, with 26.3 seconds left, Van Groningen spied Austin Reis running in space along the home sideline for the game-winning touchdown, a 22-yard strike punctuated by the school's train whistle.

“He was so open,” said Van Groningen, Ripon Christian's only other option after part-time starter Nolan Lingley elected to have season-ending shoulder surgery this week. “I couldn’t believe it, but I knew he’d catch it. … With the game on the line, we practice that all the time. It was just a bigger moment.”

Alger had struggled for three quarters, but ignited Ripon Christian’s fourth-quarter comeback with his arm. The 6-foot-8 senior completed four consecutive passes over the final two drives, including a 28-yard touchdown pass to Kamps to pull the Knights within 17-14 with 6:06 left.

Alger started the game-winning drive with a 22-yard screen pass to Max Steele, but was knocked from the game after taking a hit along the sideline. Enter Van Groningen, 9-1 as a starter for the frosh-soph team a season ago and now 1-0 for the varsity.

“Jake has got that baller instinct. He knows how to step up,” Kamps said. “He’s not fazed and he delivered the game-winner.”

Ozenbaugh praised his team’s “warrior spirit" on a night they leapfrogged the purple Warriors in the standings.

Kamps gave Ripon Christian an 8-0 with a 66-yard touchdown run on fourth-and-1 on the opening series and rushed for 114 yards on nine carries in the first quarter. For the next 24 minutes, though, it was tough sledding for the thin-rostered Knights.

Orestimba seized a two-score lead on touchdown receptions by Jacob Dominguez and Solomon Bell and a 22-yard field goal by Ulysses Madrigal. Dominguez had six receptions for 96 yards, while wingman Tyler Vargas had six catches for 47 yards and a leaping, one-handed interception to start the fourth quarter.

Quarterback Jacob Bettencourt completed nine consecutive passes in the first half, but he couldn’t move the offense down the stretch. Orestimba finished the game with four empty possessions, including a turnover on the final play.

“As coaches, we talk a lot about the expectation to win,” Ozenbaugh said. “That’s the culture we’re trying to create here. This is a huge win for us. It tells us we’re heading in the right direction.”

Ripon Christian (6-0, 3-0) will be a prohibitive favorite the rest of the way, beginning with next week’s trip to Gustine.

Orestimba (4-2, 2-1) will have its hands full the next four weeks. The Warriors host Denair, which features a three-headed monster in Steffin Winston, Hunter Musgrave and Dylan De Silva, followed by games with Waterford and potential league MVP Michael Vivo, Delhi, and Battle for the Chief rival Gustine.