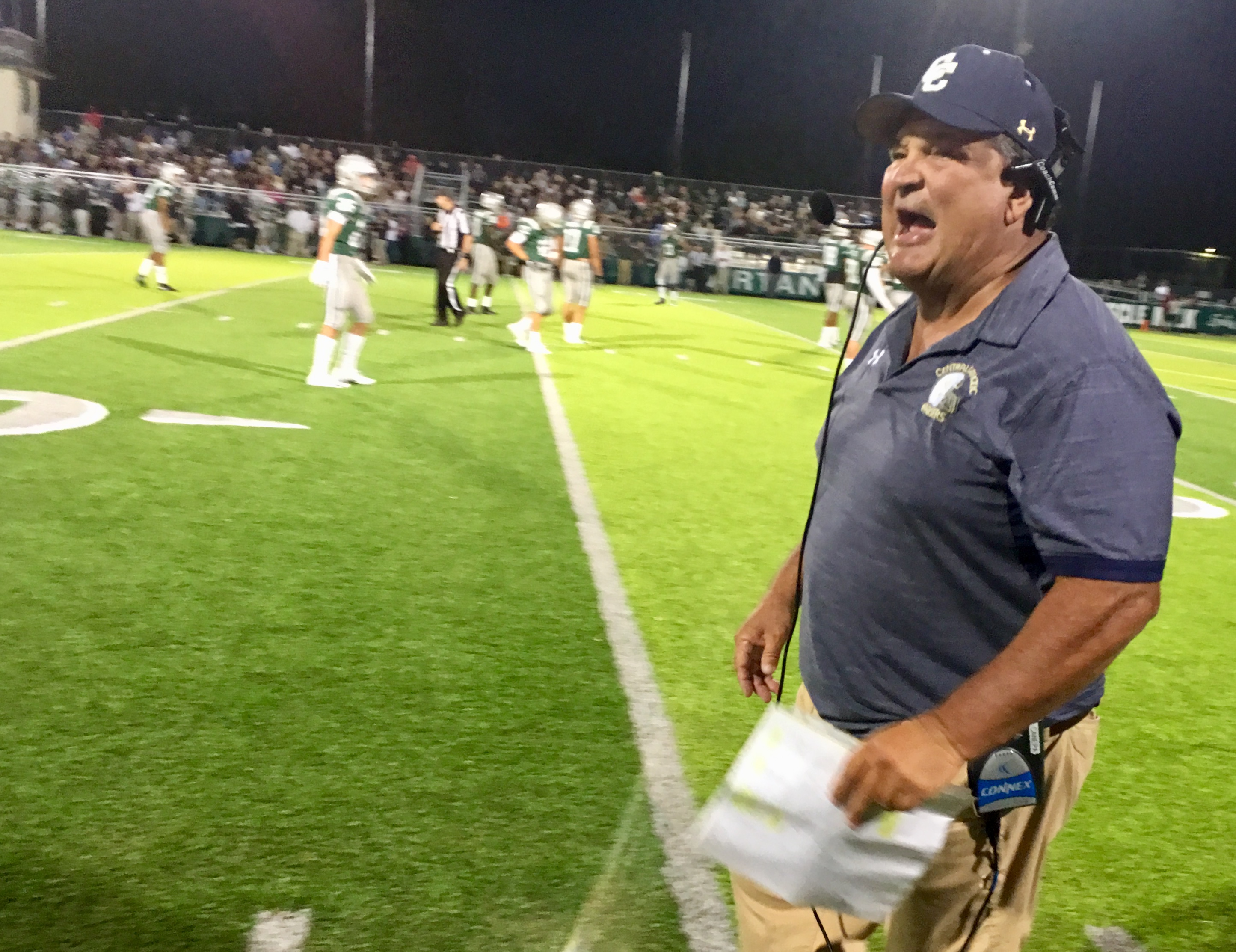 Central Catholic coach Roger Canepa screams down his sideline during the first half of a 35-7 loss to De La Salle on Friday, Aug. 24, 2018, in Concord. (James Burns)

'This is going to fuel us.' Why a loss to mighty De La Salle feels like a win to CC

CONCORD — Kyle Jackson isn’t deterred by the final score or the way the game got away from his Central Catholic football team late.

“This is going to fuel us,” the Raiders’ junior quarterback said.

For three quarters, Central Catholic, Front Row's top large-school program, stood toe-to-toe with the ninth-best team in the nation and didn’t flinch. In the end, though, De La Salle needed only 69 seconds to turn a tight affair into another blowout on a chilly, wind-swept evening at Owen Owens Field.

Shamar Garrett hurdled a pile of bodies near the goal line for his third rushing touchdown and Dorian Hale followed almost immediately with a 61-yard scoring strike as the Spartans pulled away from Central Catholic early in the fourth en route to a 35-7 victory.

“We played the No. 9 team in the nation for three quarters dog-ass tough,” Central Catholic coach Roger Canepa told his postgame huddle. De La Salle is No. 9 in MaxPreps' latest computer rankings. “We played hard, so I’m not mad at the effort. It’s the little things now.

“The stage was not too big. We belonged here. … That’s why we play these games, to be mentally and physically tested. We passed the test.”

Garrett was a blur for most of the evening, racking up 146 yards on just 14 carries. He scored on runs of 9 and 51 yards in the first half as De La Salle surged to a 21-0 cushion.

Fellow junior Dalton Durossette got the start and completed his first two passes, including a 5-yard hitch to Justin Traina to start the game, but miscues and mistakes doomed the Raiders early. Durossette misfired on his next five passes and the Raiders’ opening drive stalled after two false start penalties.

Jackson gave Central Catholic a spark in the second quarter. He completed all three of his passes for 45 yards and found his favorite target — Traina — alone in the corner of the end zone for a 5-yard touchdown with 1:51 remaining in the half.

Those were the first points allowed by De La Salle all season. Anchored by two four-star recruits, Isaiah Foskey and Henry To'oto'o, the Spartans shutout Folsom in their season opener last week, 14-0.

“I was just trying to lead the team,” said Jackson, who went 6-0 as a starter last fall before suffering a season-ending knee injury in a loss to Oakdale in the regular-season finale. “I was trying to spark the team and make a play.”

The touchdown lifted the Raiders' spirits. The defense tightened, keeping Central Catholic within striking distance going into the fourth.

Jackson said Traina’s touchdown grab helped convince the Raiders, a school with fewer than 400 students, that it belonged on a national stage with mighty De La Salle.

“You could see it on their faces. They were all pretty excited,” Jackson said. “It was a great job driving down there.”

Still, it was De La Salle (2-0), a team that never loses to Northern California opposition. The Spartans extended their unbeaten streak against teams north of Fresno to 292 games with a late blitz that left the visiting side head-spun.

Garrett scored on the second play of the fourth, bouncing over a pile of bodies at the line of scrimmage and then bulldozing his way into the end zone to make it 28-7.

After a quick three-and-out by the Raiders, Hale floated a pass into the path of Grant Daley (two touchdown receptions), who did the rest. Daley’s 61-yard reception closed the scoring — and let the air out of the Raiders’ upset bid.

Hale was 10 of 18 for 211 yards and two touchdowns. The Spartans opened up the playbook, just as coach Justin Alumbaugh promised earlier in the week, and that meant more opportunity for the cagey left-hander.

“We had to loosen it up a little bit,” Alumbaugh said after crediting Central Catholic’s tenacity and fight. “Folsom and Central Catholic, they’re good football teams and they’re going to cram the box. We had to peel some of those defenders out of there.”

“We turn the page,” Canepa said.