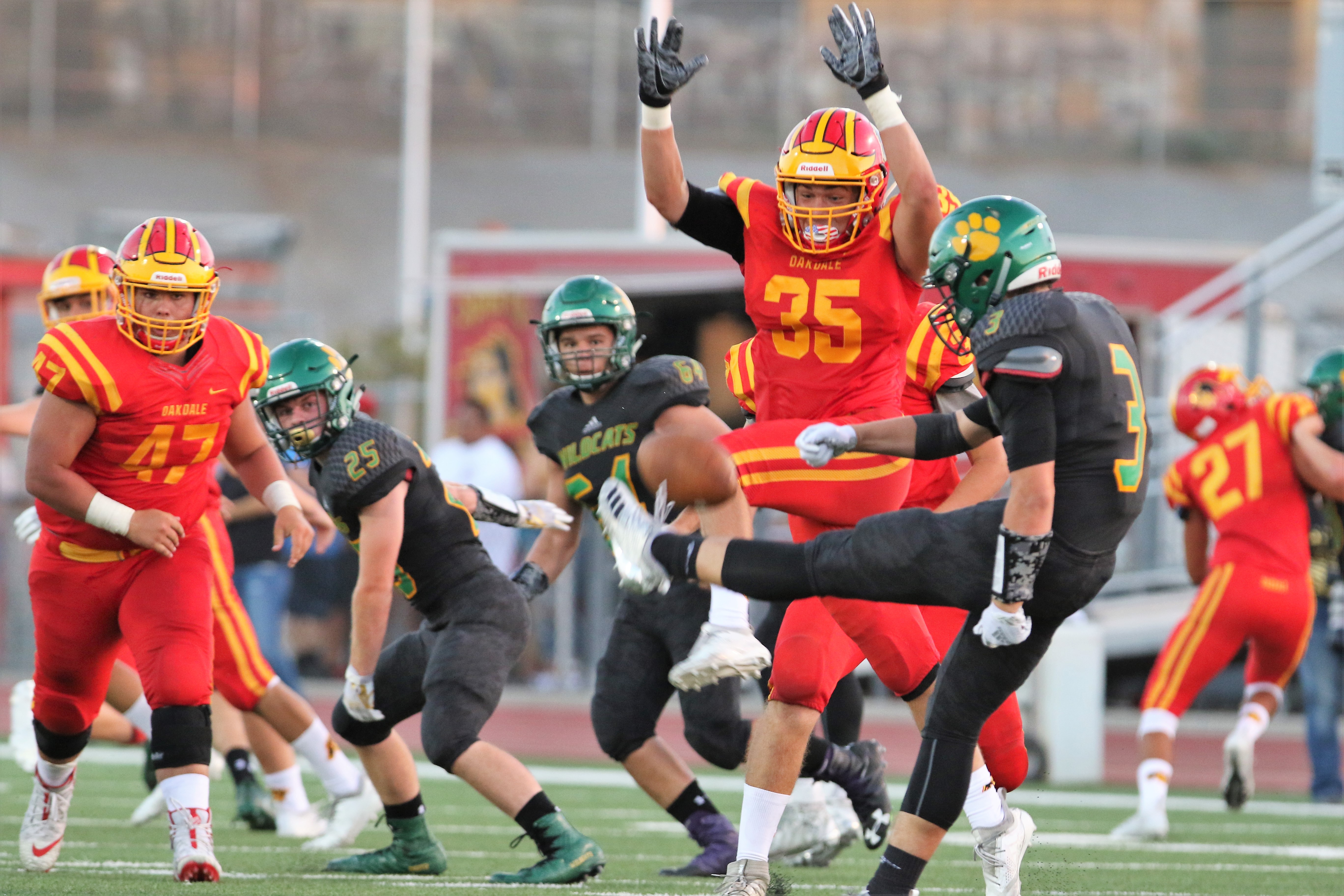 Oakdale High's Carson Frazee blocks a Sonora punt in the first half of a 49-0 victory on Aug. 17, 2018. Frazee led an impressive debut by the Mustangs, who return no starters from last year's team. (Sean Kahler Photography)

'This is our time.' With 22 new starters, Oakdale chases Sonora back up the hill

OAKDLE  — Minutes before the start of his 19th season at the helm of the Oakdale High football program, Trent Merzon used words like “struggle” and “grind” and “growth mindset” to describe a team with 22 new starters.

Sonora — not Oakdale — experienced all of those emotions and absorbed all of those lessons as the Mustangs delivered a beatdown of the Wildcats on Friday evening at The Corral, 49-0.

Zeke Saffar needed just five carries to eclipse 100 yards, and Carson Frazee and Caleb Kuppens led a super-charged defensive attack that forced four turnovers. Kuppens recovered two fumbles and scored a touchdown, while Frazee, a ball of speed and fury off the edge, had a strip sack and a blocked punt.

“We played well early, didn’t we? Defensively, we got some big stops early and we finished some drives,” Merzon said. “Our tempo was hard on them. It was hot and we played fast, and I think they wore down a little bit.”

Oakdale returns no starters from a team that won the Valley Oak League for the 13th time in 16 season and reached the Sac-Joaquin Section Division III title game. Instead of bemoaning its graduation losses, Oakdale’s next class, an unheralded group with a chip on its shoulder, seized the opportunity.

On Friday, they introduced themselves to the rest of the region.

“Every spot has been filled be a new person, so this is our year. There are really no returners. This is our time to make our mark,” Kuppens said. “We’re young and kind of inexperienced, but we work hard and it paid off tonight.”

Saffar, a highly-touted sophomore, rushed for 113 yards on his first five carries. He sprinted into the end zone on runs of 35 and 54 yards to stretch the Mustangs’ lead to 21-0 early in the second quarter.

“I was happy,” Safar said of his first varsity score. “It’s a new feeling with a new crowd and everyone cheering for you.”

It was an impressive varsity debut superseded only by the defense, which snuffed out the Wildcats’ triple-option offense. Sonora entered the game ranked No. 1 in the region among small schools, largely because of the talent it returned in the offensive huddle. Quarterback Jake Gookin, running back C.J. Castleman and wide receiver/defensive end Evan Bearden ranked among the Front Row’s top-20 returning players, but all three were reduced to footnotes on a night owned by the host Mustangs.

Sonora (0-1) turned the ball over four times, struggled in special teams and failed to find the end zone against its ancient rival. The Wildcats have now lost two straight in the series.

“We had some question marks coming into this game. We weren’t where we wanted to be,” Sonora coach Bryan Craig said. “We just weren’t ready. That’s on us as a coaching staff, just as well as it’s on the players for not being prepared.”

Before the game, Craig expressed his concern with the offensive line and its ability to protect Gookin. Those fears were realized. Frazee bent Gookin backwards with a blindside sack that jarred the ball loose. Kuppens fell on top, and two plays later, Saffar burst into the end zone from 35 yards out to make it 14-0.

Saffar broke loose again on the second play of the second quarter, following full back Max Moore through a hole to make it 21-0.

Kuppens returned to the spotlight, scooping up another fumble. He later capped the drive with a 1-yard push, turning this rivalry into a rout before halftime.

Leo Ayala, Evan Waite and Devin Murphy scored second-half touchdowns for the Mustangs, who travel to St. Francis of Mountain View for next Saturday’s Honor Bowl showdown with Archbishop Mitty.

“We played as hard as we could and we played for each other,” Saffar said. “The O-line did really good and the defense did really good, and I’m ready for the rest of the season. People have been talking about us being the underdogs. People doubted us through the summer. Today, we showed everyone what we could do.”

With the win, Oakdale’s senior class exorcised a demon. Sonora had beaten them soundly as freshman and sophomores. Not on Friday.