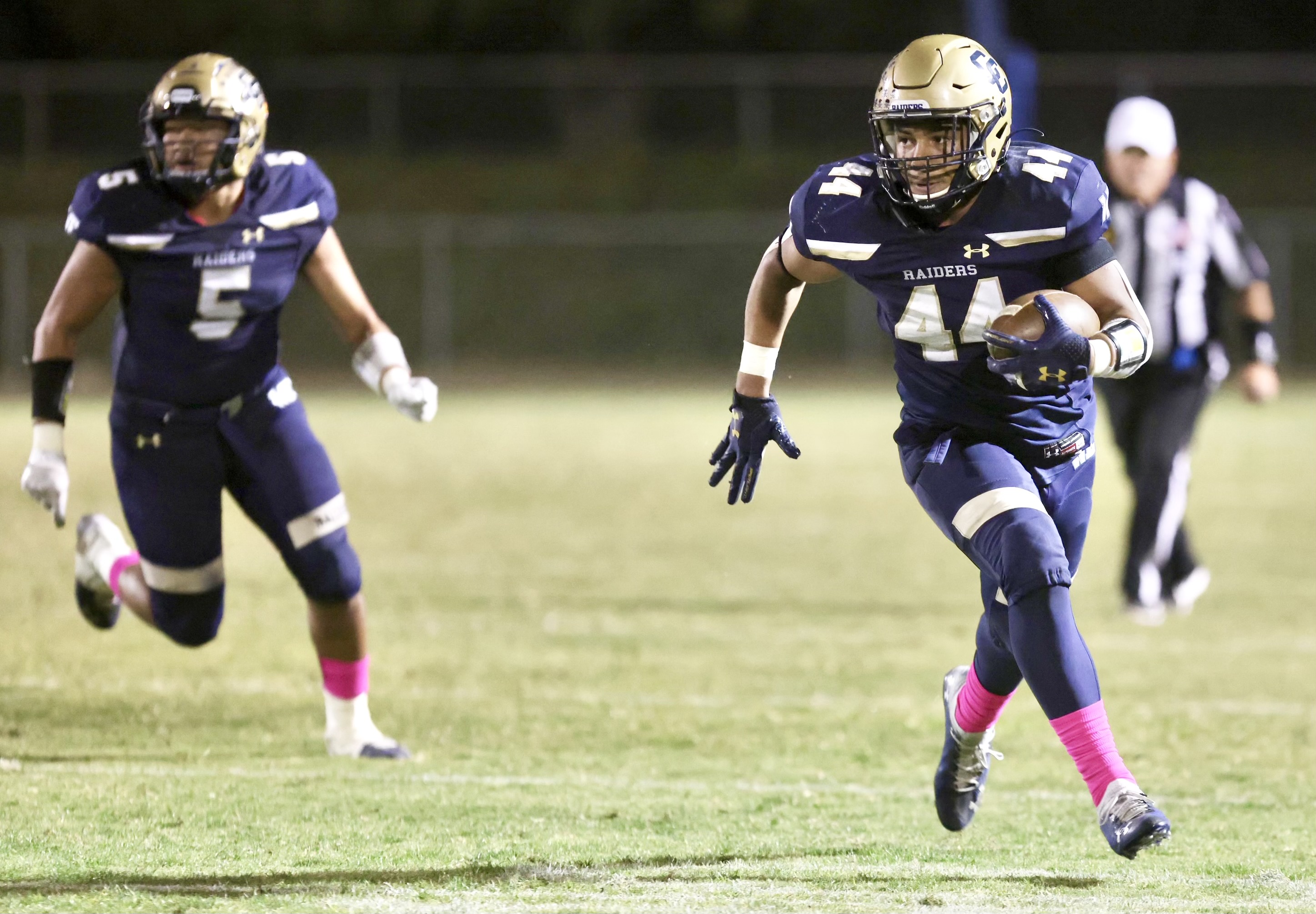 Central Catholic running back Aiden Taylor rushed for 228 yards and four touchdowns in a 56-33 victory over Manteca, which had come into the game unbeaten and No. 1 in the regional power ranking. (Wayne Thallander)

'This was Raider football': Central hammers Manteca to become new No. 1

Using brute force on both sides of the ball and some deception, the Central Catholic football team supplanted Valley Oak League rival Manteca atop the regional large-school power rankings with a 56-33 victory on Friday evening at David Patton Field.

Running backs Aiden Taylor and Julian Lopez combined for more than 435 rushing yards and accounted for eight touchdowns — four apiece — as the Raiders continued their historical dominance of Manteca. Central Catholic is now 7-0 all-time against the Buffaloes, one of the Sac-Joaquin Section's most decorated public schools.

The Raiders (7-1, 4-0) now have the inside track to a fifth Valley Oak League championship, and third outright. Central Catholic will be heavily favored against East Union and Sierra, while Manteca (7-1, 3-1) closes with Kimball and Oakdale, the final two legs in the VOL's gauntlet.

"It feels great. I'll be very honest, we've played eight games and seven have been difficult," Central Catholic coach Roger Canepa said. "We still have to get prepared for the next few games; can't let our guard down. But it's nice to get this win. We've got the inside track now. No matter what we do, we want to win out."

Taylor did the heavy lifting for the Raiders in the first half, amassing nearly 200 yards and three touchdowns by the intermission. He scored on runs of 52, 15 and 25 yards, the latter coming in the final seconds of the half to give Central Catholic a resounding 35-18 cushion.

A two-way starter, Taylor, who goes by the nickname "Pony Boy," rushed for 184 yards on 11 carries in the first half, bouncing off tackles and veering into space as the Raiders scored on their first five possessions.

"I got it when I was 6 years old," Taylor said of the nickname, used often by the Raiders' announcer and teammates. "I was a little chubby, running through people. I kept it moving and didn't stop. One coach started calling me 'Pony' — I had really long hair — and ever since it just stuck."

His running mate, Julian Lopez, was a runaway train, as well.

Lopez, who missed four games with strained ligaments in his knee, provided the finishing blows. He tallied 136 of his 177 yards in the second half, including a telling 31-yard burst late in the game. Lopez appeared bottled up at the line of scrimmage, but the  225-pound back emerged from the pile. He carried Manteca's Lyon Colon, ripping at the football, the final 10 yards to the 1. As the crowd applauded his tenacity, Lopez, who lost his helmet in the shuffle but not ball, flexed.

It was a strong performance, indeed.

Taylor finished with a team-high 228 yards and four touchdowns, while Lopez topped 100 yards for the second consecutive game. He tallied touchdowns in three different ways: scoring runs of 1 and 26 yards; a 10-yard catch from sophomore quarterback Tyler Wentworth; and a 16-yard toss to Jaelon Nichols in the first quarter.

"This was Raider football," Canepa said. "This is the old school, how we won (CIF State titles) in '12, '13 and '14. We willed ourselves on people. We played good defense. Run the ball. We have a great quarterback (Tyler Wentworth) and receivers; we can throw it any time. The kids play hard. Nowadays, it's hard to get kids to play. We play as a team. We're not worried about stats. We just do what we got to do."

Former Raider running back Lyon Colon scored on a 73-yard run in the fourth quarter. He also had an 89-yard run to the Raider 1-yard line that set up a plunge by Blake Nichelson, a Power 5 prospect who gave the Buffaloes hope early on. Nichelson answered Central Catholic's opening score with a 54-yard touchdown to make it 7-7 just three minutes into the game.

After Lopez found Nichols with a tailback pass to extend Central Catholic's lead to 14-7, Manteca answered with a deep ball down the sideline to Nichelson, who has offers from Oregon State, Boston College and Fresno State. He was tackled at the 10.

The game changed over the next four downs.

Central Catholic held its ground, thanks in large part to a crushing tackle by Taylor, forcing Manteca to boot a 24-yard field goal late in the first quarter. The Raiders responded with a 21-8 burst, including a demoralizing 25-yard touchdown run by Taylor with 23.2 seconds left in the half.

"That was huge," Canepa said of the red-zone stand. "... The biggest play of the game was when we scored right before the half. We did a double handoff that we practice and I say it's going to work -- and it worked."