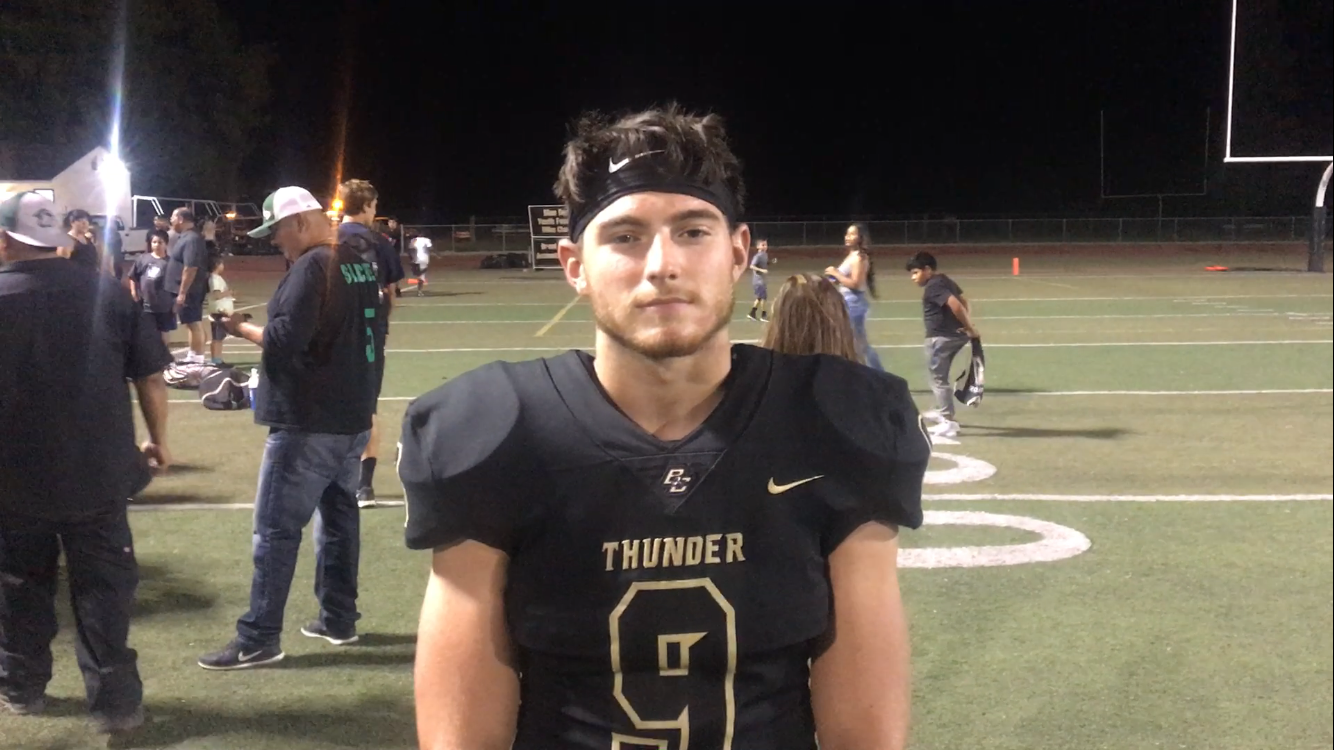 Buhach Colony running back Jon Buttrey carried 18 times for 90 yards and two touchdowns in the Thunders' victory over Gregori on Aug. 17, 2018. (Sean Lynch)

ATWATER – With just over five minutes to play and the game very much in doubt, Buhach Colony coach Kevin Navarra put the ball in the hands of his senior running backs.

Despite dominating the game in terms of time of possession, plays and yards, the Thunder had failed to put visiting Gregori away and the Jaguars had seized momentum with a long fourth-quarter strike and a couple defensive stands.

The tandem of Jon Buttrey (18 carries, 90 yards, two touchdowns) and Owen Thomas (14-81) helped make sure it didn’t come back to haunt BC. The pair carried six times on the game’s final drive, converting two of the four first downs as the Thunder ran out the clock and opened the season with a 13-6 victory at Falcon Field.

“I don’t think the score reflected how we really played,” Buttrey said. “I mean we smashed the ball down the middle all night. Just our bread-and-butter plays working all night long and that was a big thing for us.

“I think we have the best set of skill players in the (Central California Conference). We have depth like no other team, I think. One guy gets a cramp and the next guy, just as good, comes in and runs it down the middle. We’re deep, so it really helps to run it down the middle when its grueling.”

"Grueling" was the perfect way to describe it as the Gregori (0-1) defense forced BC to grind it out. The Jaguars all but took the Fly sweep away, limiting the Thunder to just two plays of 20 yards or more in the game.

Buhach (1-0) carried the ball 54 times in the game for 281, with most of the damage coming in short bursts up the middle from Buttrey, Thomas and Joshua Goodman (9-78). Navarra’s squad racked up 22 first downs and almost doubled up Gregori’s total plays in the game (69-36).

The Thunder took just a 7-0 lead into the break thanks to a missed field goal on their opening drive and a fumble at the Jaguar 13-yard line late in the second quarter. Buttrey did manage to punch in a 6-yard TD run in between those to give BC a lead at intermission.

Buhach Colony finally got some breathing space when Buttrey converted again with 11:02 to play in the fourth quarter. His 1-yard run pushed the lead to 13-0.

After three-plus quarters of offensive frustration, Gregori needed just 17 seconds to fight its way back into the game. Baker Melendez rolled right on a broken play and found Trey Longstreth cutting across the field. Longstreth slipped a tackle and sprinted 80 yards for the score to make it 13-6 with 10:55 to play.

“We had an opportunity. If anything, our primary goal is to be close in the fourth quarter. To have an opportunity to win, and we did. Unfortunately, we didn’t make the plays and they did.”

The Gregori defense followed up the score with back-to-back defensive stands, but turned the ball over twice down the stretch. An O’shea Ward fumble recovery ended one drive and Thomas intercepted Melendez at the BC 8-yard line with 5:10 to play to preserve the victory.

“It’s probably a little more low scoring than most people expected, but for me, it was exactly what I wanted,” Navarra said. “I’ve told people since I was the defensive coordinator that we will win games and win championships when we play good defense. This offense will always score points. Now unfortunately, tonight that didn’t happen, but we did some good things.

“I was a little surprised only scoring 13 points, but (Gregori) did a good jump. I thought they had a good game plan against the sweep, but running behind an experienced line and those two senior running backs made a difference today.”

This article was written by Sean Lynch, a former sportswriter with the Merced Sun-Star. Follow him on Twitter @Sean_Lynch19.