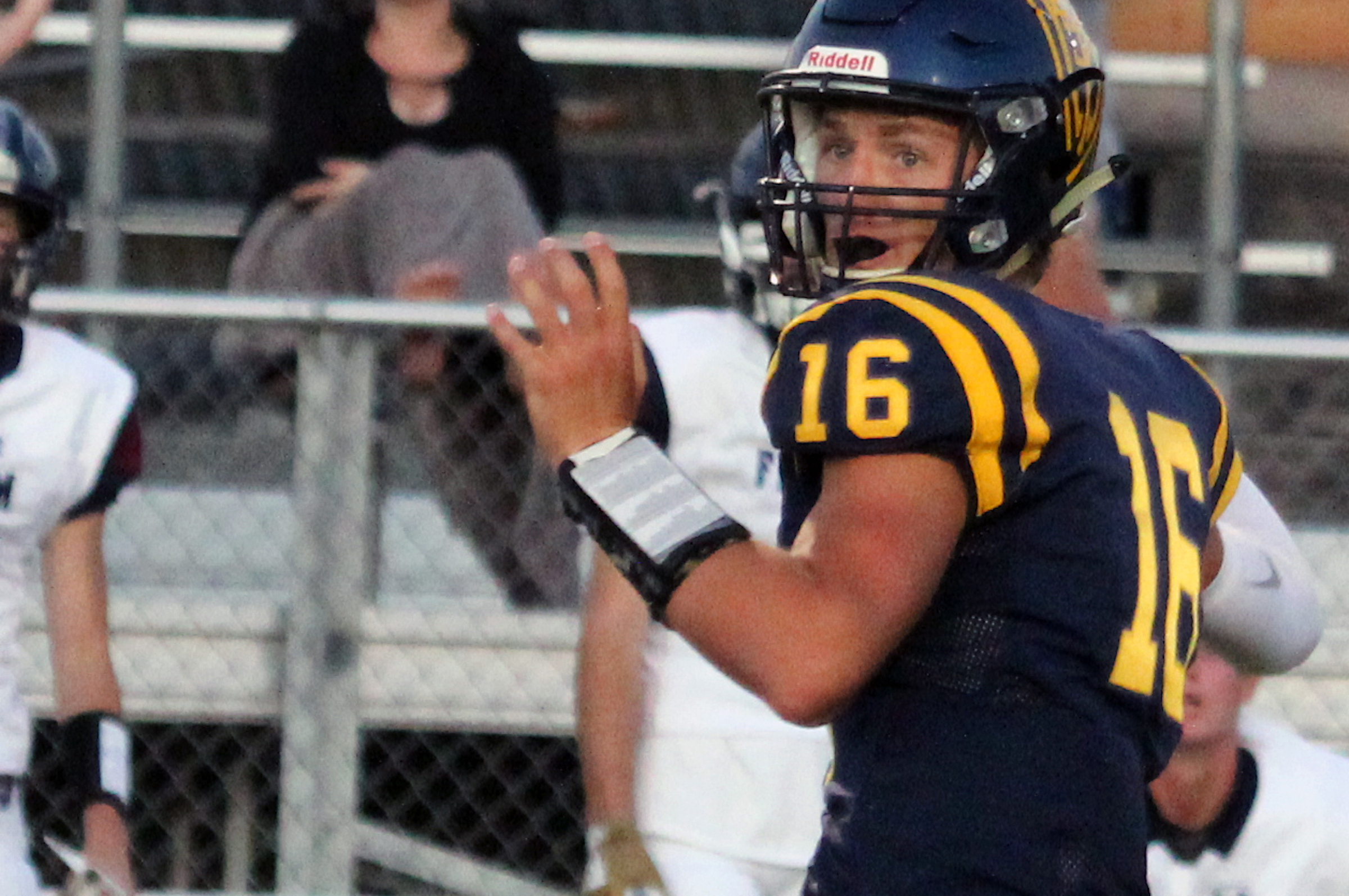 Brock Paslay helped set up Turlock's first touchdown with a 16-yard pass to Holden Baldwin on fourth down, but the momentum was short-lived in a 41-13 loss to state-power Central of Fresno. (Samantha Schmidt)

Too much Central: Turlock yields 6 passing TDs in 41-13 loss to state power

TURLOCK – The walk from Joe Debely Stadium to the Turlock High locker room is a long one, especially after a 41-13 loss.

Most of the Bulldogs didn’t stick around for hugs and handshakes from parents and friends. They beat a slow but business-like retreat, knowing all along they were outclassed by Central of Fresno, the two-time defending champion of the Central Section.

Jackson is right, though a close-to-perfect game probably wouldn’t have been enough for the Bulldogs (3-2). Central (5-0), ranked 16th in California, showed why it’s 42-5 since Kyle Biggs was named head coach in 2016.

Central tamed Turlock with a balanced offense featuring major threats across the field. Quarterback Jameson Silva, a senior who transferred from Edison of Fresno, tossed five of the six Central passing touchdowns.

Nearly all the Grizzlies’ touchdowns came from long distance – 57, 16, 21, 10, 36 and 50 yards. For the record, Turlock didn’t bust a coverage on any of the six. Receiver Xavier Worthy accounted for three of the scores, and shifty running back Quali Conley(18 carries, 128 yards) snagged one.

Turlock, which allowed less than 13 points per game until Friday night, lacked the speed or the size to match up with Central. The Grizzlies also trotted out talent like hard-to-move 320-pound nose tackle Ricky Correia and dangerous return man Jeremiah Hunter, the latter who will join Turlock lineman Everett Johnson next fall at Cal.

Fact is, the Bulldogs needed Central to be a little road-weary. Instead, the Grizzlies didn’t commit a turnover and were penalized only three times for 30 yards.

“They’re a really good team,” Peterson praised. “I thought my guys did very well at times. Other times, they got the best of us.”

Turlock, pummeled by Central 54-14 a year ago, enjoyed a brief 7-6 lead. The Bulldogs capitalized on a short punt, gained momentum on a 16-yard fourth-down completion from Brock Paslay to Holden Baldwin, and scored on a 1-yard step-in by Anthony Frias.

As it turned out, that only sharpened Central’s attention. The Grizzlies reached the end zone on their next three possessions, the first a perfectly thrown 10-yard lob from Silva to Worthy. Silva, mobile and accurate, was not fazed by four Turlock sacks.

Biggs, whose staff includes his father Bill – a Central Section icon as an offensive line coach for more than 40 years – quickly has built a powerhouse.

“Turlock was fundamentally sound and gave us some early problems,” Biggs said. “We adjusted and got rolling in the second quarter. …We’ve got guys. We just have to get them the ball.”

Turlock, outgained 350-216, managed only five first downs from the time it led until Central inserted its reserves early in the fourth quarter. Frias (18 carries, 113 yards), sprung a 48-yarder during the third quarter. Other than that, his gains were hard-earned.

“We wanted to take away what they do best,” Biggs said.

Admirably, Turlock – trailing 27-7 at halftime – stayed aggressive. It opened the second half by nearly recovering an onside kick, and later went for the end zone on fourth down from the Central 9.

“Keeping the guys inspired,” Peterson said. “If you play just for the scoreboard, you’re playing for the wrong guy. We play for each other.”

Turlock holds one consolation prize – a bye next week before its Central California Athletic League opener at Downey, a game looming more important than the one the Bulldogs just lost.

“Our coaches always talk about the three seasons—non-league games, league games and the playoffs,” Jackson said. “We’re gearing up for the second season.”