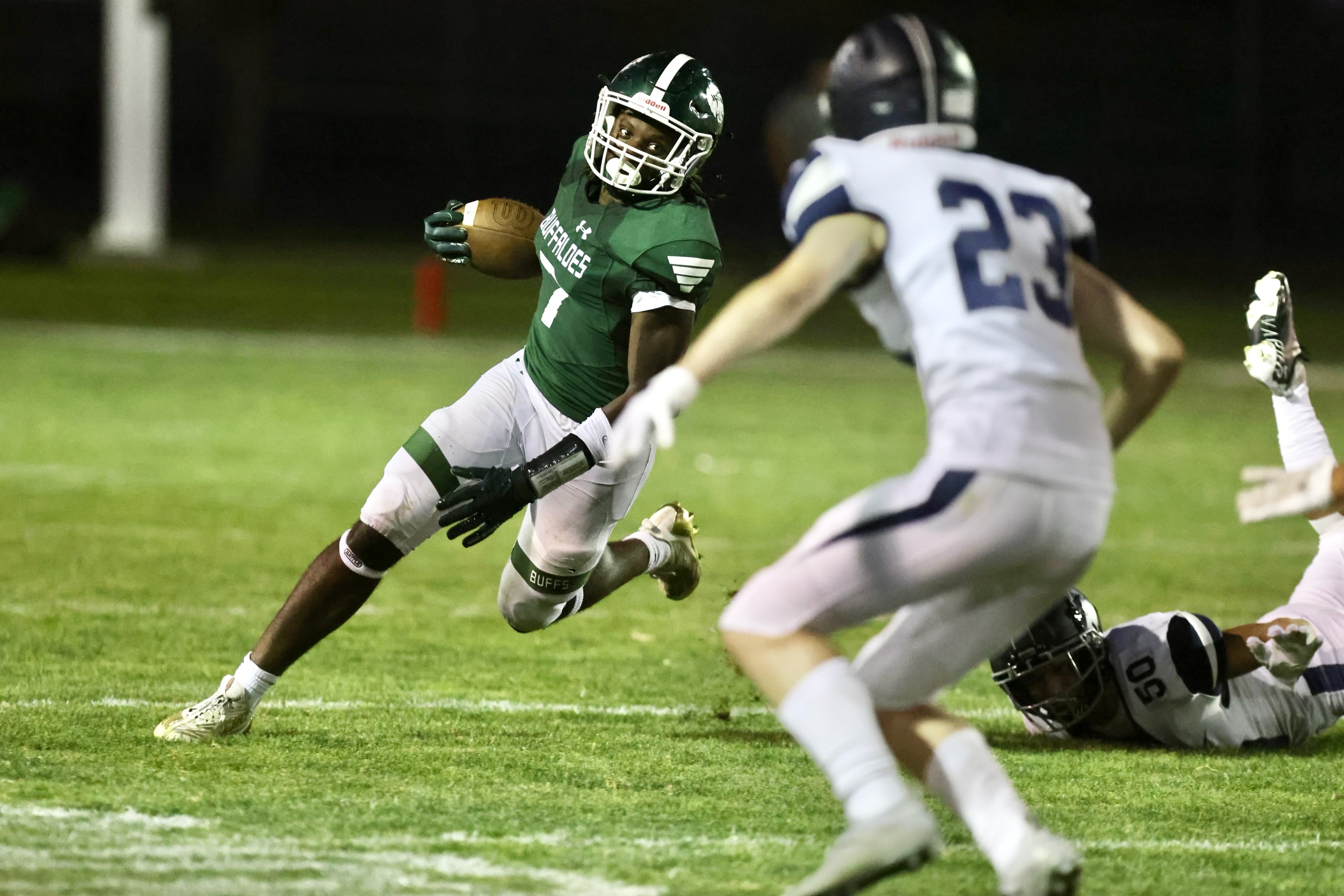 Manteca High running back Bryson Davis cuts the ball up field during a season-opening victory over Vista del Lago. Since then, Manteca has rolled to the top of the regional rankings, unbeaten and relatively untested. (Wayne Thallander)

The Manteca High Buffaloes, one of the area’s elite football programs, have won eight Sac-Joaquin Section titles, four of them after Central Catholic rejoined the Valley Oak League in 2014.

But Manteca’s sparkling resume has a glaring omission — zero wins over Central Catholic in the MaxPreps era (2004 and beyond).

Which brings us to another Central Catholic-Manteca showdown, with the VOL title probably going to the victor, Friday night at Guss Schmiedt Field.

Simply, the timing is perfect for Manteca (7-0, 3-0) to end that 0-7 drought against a Raiders team (4-4, 3-0) that struggled during a punishing preseason.  The Buffaloes are enjoying their best season in years, but the CC game no doubt has been circled on their calendar.

“Each year is different,” Manteca coach Mark Varnum said. “We don’t put a lot of stock in their win-loss record. We know they’ll bring it.”

Problem is every year has not been different for Manteca against Central Catholic. The Buffaloes have produced only two three-way VOL titles — with Central Catholic and Oakdale in 2016 and ’19 — since CC’s arrival. Manteca’s last outright league title was 2013.

Last fall offered an ideal example of the VOL’s perennial intensity and Manteca’s issues with Central Catholic. The 2021 showdown, very similar in importance to what will happen Friday night, resulted in a Raiders 56-33 victory. Manteca tumbled to fourth place in the VOL, then blitzed the section’s Division III bracket.

Truth be told, the Buffaloes have grown weary of that CC box that has gone unchecked. Everything points to filling that void very soon.

Manteca has not been seriously challenged this season. The Buffaloes’ average margin of victory is 46 points, it averages 410 yards per game and its defense has allowed only 91 points.

Senior do-everything star Blake Nichelson, one of California’s premier seniors, stirs all drinks for Manteca.  He’s scored 22 touchdowns, yet it is his dynamic field-covering play on defense that has earned him a commitment to Florida State.

Varnum and his staff have been careful with Nichelson, and all the lopsided games also have helped. So has the talent surrounding him.

“We have four or five guys to get the ball in their hands,” Varnum said. “We don’t have to put it in Blake’s hands every play.”

Davis, who didn’t play high school football until this season, returned a kickoff for a touchdown on his first play. He’s scored 10 touchdowns and has allowed Nichelson to be a threat everywhere in the Manteca attack.

On defense, Nichelson swoops seemingly from all angles while Alijah Cota (6-foot-3  230 pounds) patrols at inside linebacker. Varnum said Cota, who missed last week’s game due to injury, will return against Central Catholic.

The annual CC-Manteca matchup always is a slugfest of sorts, but there is an added uncertainty this year. Many years have passed since Central Catholic was 4-4, and that is after three convincing VOL victories. The Raiders were physically battered during non-league losses to St. Mary’s, St. Francis of Mountain View, Serra of San Mateo and national power St. John Bosco of Bellflower.

Questions: How good are the Raiders? Could they be better than their record?

They graduated many of their stars from the 2021 team that won the VOL, the section D-II and Northern California title. But several mainstays have returned, and they appear to be finding their stride.

“Nobody has played the guys we’ve played,” Central Catholic coach Roger Canepa said. “We’re getting better, we’re throwing the ball better and are pretty balanced. We can move the ball.”

Quarterback Tyler Wentworth, a 6-foot-5 junior, has thrown for 1,207 yards and 12 touchdowns. When Canepa talks about balance, he refers to senior running back Tyler Jacklich, who’s rushed for 1,225 yards and 13 TDs.

“They (Manteca) have a good team. We’ve had some success against them,” Canepa said. “I like where we’re at. We’ve been tested, because we’ve seen everything.”