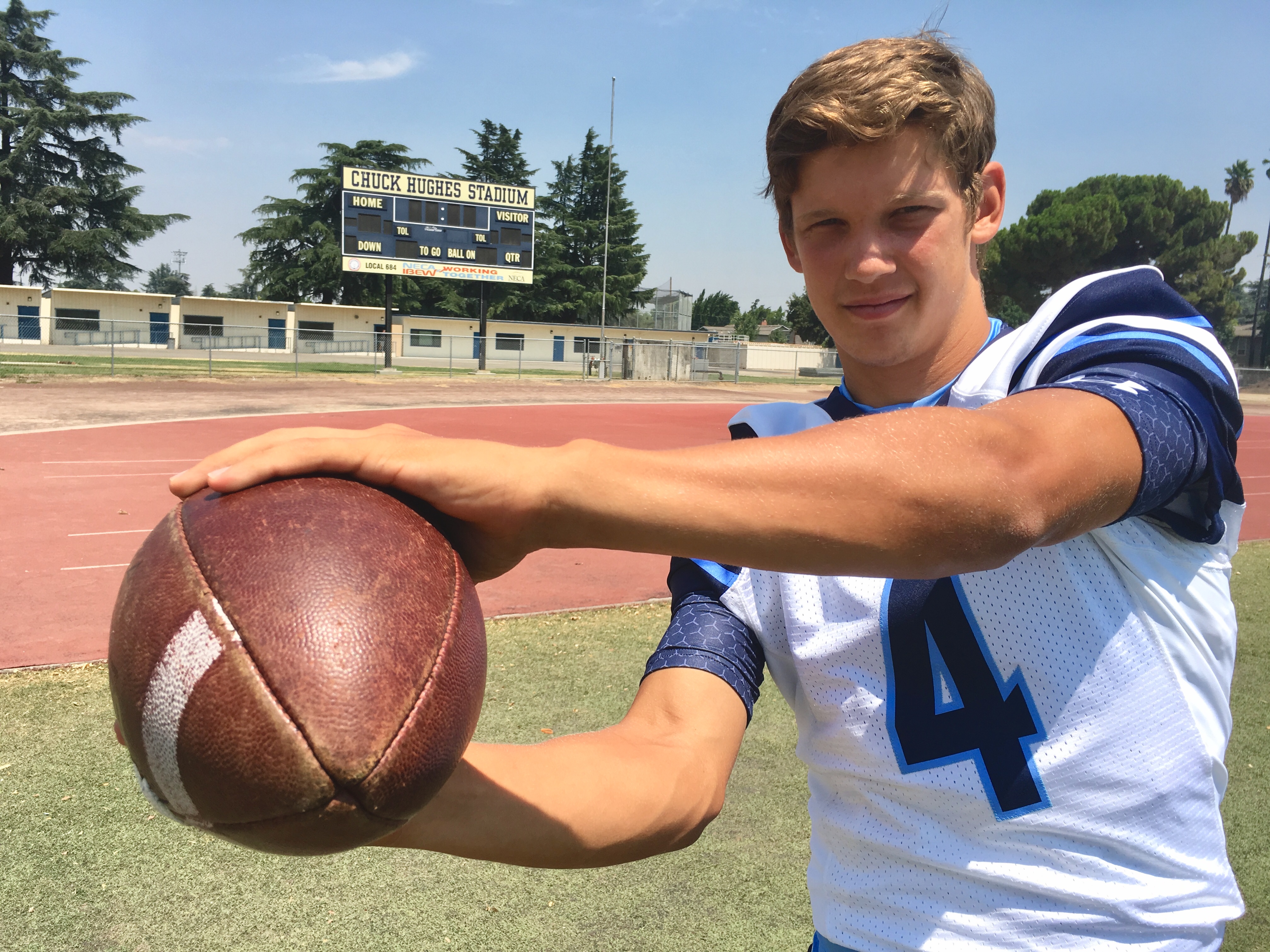 Downey High's Bryce Peterson injured his throwing shoulder in the regular-season finale and will move to wide receiver this fall. (James Burns)

The quarterback battle between Downey High junior Bryce Gouker and highly-touted freshman Beau Green may carry into the Aug. 17 opener against East Union.

Coach Jeremy Plaa said there’s a “good chance both see time” against the Lancers, a Sac-Joaquin Section playoff team the last two years, and there isn’t an ounce of concern in the offensive huddle.

“We have two great quarterbacks right now in the battle for the starting spot, Bryce Gouker and Beau Green,” said UC Davis-bound athlete Bryce Peterson, who started at QB last and threw for more than 2,800 yards and 26 touchdowns in the Knights' exciting "Air Raid" attack.

“Both are great quarterbacks and have their own special abilities. Honestly, our receiving corps and (offensive line), we’ll be fine with whoever starts.”

Certainly, it helps having a cast of playmakers like Peterson, Anderson Grover (team-best 53 receptions, 806 yards, six touchdowns) and Jordan Wilson (431 yards, 10 TDs), among others.

A shoulder injury forced Peterson, No. 4 on the Front Row’s list of top-50 returning players, to move back to his natural position as a wide receiver, defensive back and part-time running back. He was raised a running back with the Central Saints.

It didn’t take him long to build a following as one of the region's mos dynamic skill players on the recruiting trail, either. Peterson, who joined the Knights’ varsity team as a sophomore call-up in the slot, was named Offensive MVP at a UC Davis skills camp in June and was soon offered by Aggies coach Dan Hawkins.

“I played quarterback because it’s high school and I love getting the ball a lot, but in college that’s what I mainly wanted to do, either running back, defensive back or wide receiver,” said Peterson, squeezing a football during a photo shoot. “That’s what I love the most.”

Peterson is a throwback at a flashy position. He doesn’t wear gloves and instead trusts his hands, calloused over from catches and throwing iron around the weight room — “I just catch better without them,” he says.

He’s confident in his ability and his place among the region’s other high-profile athletes, but he’s not boastful or cocky — “I do what I can to be the best,” he says, “and I’m confident everything I’ve done will back that up.”

And he speaks in a soft, measured tone; he’d rather his play make a statement.

Plaa plans to use Peterson, an all-Mother Lode League selection last fall, all over the field. His versatility and proven play-making ability make him one of the most interesting players in the Sac-Joaquin Section, regardless of who is under center.

Last fall, Peterson was the model of explosive efficiency. He completed 62.9 percent of his passes in an offense predicated on the pass. Peterson was 175 of 278 for 2,808 yards and 26 touchdowns. He threw just nine interceptions. What’s more, he’s the Knights’ top returning rusher after picking up 450 yards and nine more scores.

This season, he’s got just one goal: To ball out.

“The head coach — coach Dan Hawkins — said ‘Don’t worry about yards per game, catches or any stats. Just go out and play football,’ ” Peterson said. “It feels great knowing I don’t have to worry as much about getting to the next level. I can just ball out.”