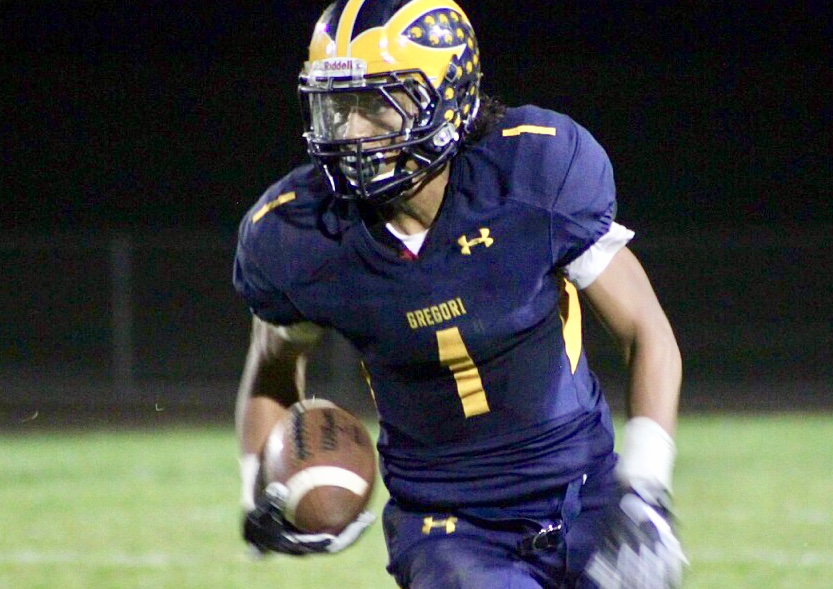 Gregori High senior Marcello Longstreth is one of the top returning wide receivers in the Sac-Joaquin Section and a versatile talent, but he's without a single four-year scholarship offer and that's maddening. (Monica Sangha)

Top returning players, No. 7: Gregori star plays with 'chip on my shoulder'

He has been hailed as one of the top football players in the southern half of the Sac-Joaquin Section, a player so versatile he’ll play at least three positions this fall for Gregori High.

However, reputation alone isn’t enough to satisfy Marcello Longstreth, who says his ability and potential won’t be confirmed until he receives an offer from a four-year university, like many of the other top talents in the region and the Front Row’s list of top-50 returning players.

Longstreth is No. 7 on that list and one of the few in the top-10 without an offer. He’s traded emails with Cal Poly, Fresno State and Sacramento State, but no one has committed to the electric playmaker.

Until then, he’ll play with a chip the size of a football on his shoulder.

“It makes me pretty mad,” Longstreth said. “I do have a chip on my shoulder to go out there and prove I’m one of the best players in the Central Valley. I try to prove it everyday. I put it (hard work) in on the practice field everyday to show them I’m here and I’m ready. I want to play football.”

Longstreth hopes a revamped schedule boosts his recruitment. One season after raising the Modesto Metro Conference banner for the first time in school history, Gregori moves into the newly formed Central California Athletic League with the likes of Turlock, Pitman, Downey, Modesto and Enochs.

Turlock was the two-time defending champion in the Central California Conference before the Sac-Joaquin Section realignment process, and Downey won five consecutive Modesto Metro crowns from 2012 to 2016.

Gregori will also be tested by a non-conference schedule that includes a season-opening clash with Buhach Colony, ranked No. 7 in the Front Row’s large-school poll; Merced (Aug. 24);  Beyer (Aug. 31); McNair (Sept. 7); and Weston Ranch (Sept. 13). The Thunder feature Trey Paster, a 6-foot-3 defensive back with offers from Nevada and Arizona.

“We’re very excited to play against teams that will challenge us on the field. It won’t be easy to win,” said Longstreth, whose offseason work focused on building speed and strength. “It’s going to be a battle every week to see who is better.”

Longstreth was named to the all-MMC team last fall as a wide receiver. He had 42 catches for 914 yards and eight touchdowns, developing a rhythm with quarterback Bobby Avina (3,015 yards, 36 TDs), now a walk-on freshman at Arizona State.

Longstreth has spent the summer building that same connection with transfer Baker Melendez, a Manning Passing Academy disciple who played at Beyer High last fall. While Melendez has the dubious distinction of following Avina’s record-setting season, he won’t be the only signal-caller.

Longstreth will be featured under center, as well, a tactic aimed to keep defenses off-balanced. He was slated to start at QB before Melendez’s arrival over the summer.

“We’ve changed a couple of things,” Longstreth said. “Some plays I’ll be at quarterback and some plays I’ll be at wide receiver. We’re mixing it up on the offensive side of the ball. Having two quarterbacks, we both can scramble and run around and get the ball where it needs to go. We’re doing this to keep defenses guessing.”

Longstreth will also play safety. He enjoys the physicality of the position; how one play in the middle of the field can swing momentum. Safety, he says, will likely be the position he focuses on at the next level … wherever that is.

Longstreth is confident an offer will come once the season begins. If you’re watching, he’s the player with the football-sized chip on his shoulder.

“It will heat up,” Longstreth said of his recruitment.