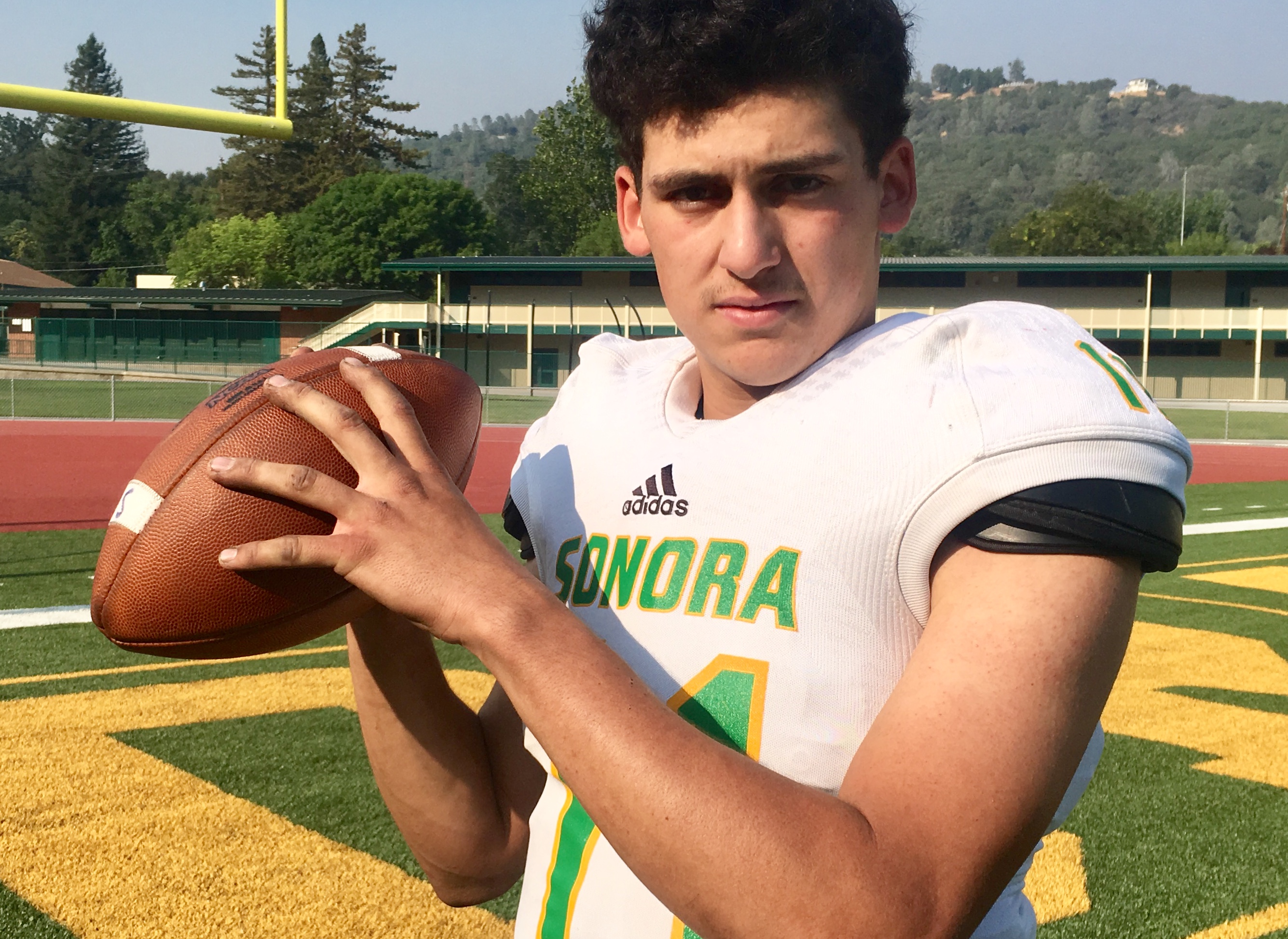 Sonora High senior Jake Gookin, who rushed for more than 1,000 yards last fall, may get a chance to showcase his arm a little more this season. (James Burns)

Sonora High senior Jake Gookin jogs across the bridge that leads into Dunlavy Field, extending his throwing hand to a stranger as he goes.

He’s got the kind of grip you’d expect from a high school quarterback raised in a blue-collar community. It’s firm, like a vise tightening around a piece of lumber, and covered in dirt, grease and …

The all-Mother Lode League quarterback ripped open a knuckle during an offensive series on Monday evening and red oozed from his finger. It collected on the ball and the turf, and in splotches on his shirt before he finally taped it up.

Now in his second season at the helm of the Wildcats’ option offense, Gookin has proven to be unstoppable. Not even an exhausting summer job or a wound on his throwing hand could slow him.

Gookin is No. 8 on the Front Row’s list of top-50 returning high school football players and the highest-rated quarterback after rushing for more than 1,000 yards and guiding the Wildcats to a fourth straight MLL title.

“It’s very humbling, but I don’t look at it like that,” Gookin said of the honor. “I like playing football. It’s high school football and I have fun with it.”

Gookin emerged from relative obscurity last fall. He began the 2017 season as a slot receiver, but was forced under center when Rico Sanchez suffered an injury. Gookin never gave the job back.

“Early on in the season you could see the raw skill he had, but he had no varsity experience. As the season went on, he didn’t make the same mistake twice. He got better and better and better,” Sonora coach Bryan Craig said. “By the end, in the Colfax game, you could see what that kid could do. Now, with all that varsity experience under his belt, we expect a lot from that young man.”

Gookin turned in a super-charged postseason performance, accounting for 11 touchdowns over two games, including six rushing scores in a one-point loss to Colfax in the second round of the Sac-Joaquin Section Division V playoffs.

He rushed for 261 yards and five more TDs in a shootout win over Highlands in the opening round. The Wildcats outscored Highlands 43-23 in the second half.

“Here at Sonora we run that triple option, so you have to have legs playing quarterback,” Gookin said. “We run the ball a lot, so being able to move is important.”

His ability to run is a game-changing option in the Wildcats’ multi-faceted attack, but he may get the chance to throw more often with a giant flanked out wide: 6-foot-4 Evan Bearden is the MLL’s reigning defensive player of the year, but projects as a tight end at the Division I level. Bearden has three Division-I offers.

Gookin completed 60 percent of his passes, but averaged just five attempts through the first eight games. If defenses decide to stack the box to stop Gookin and running back CJ Castleman, Craig won’t hesitate to attack through the air.