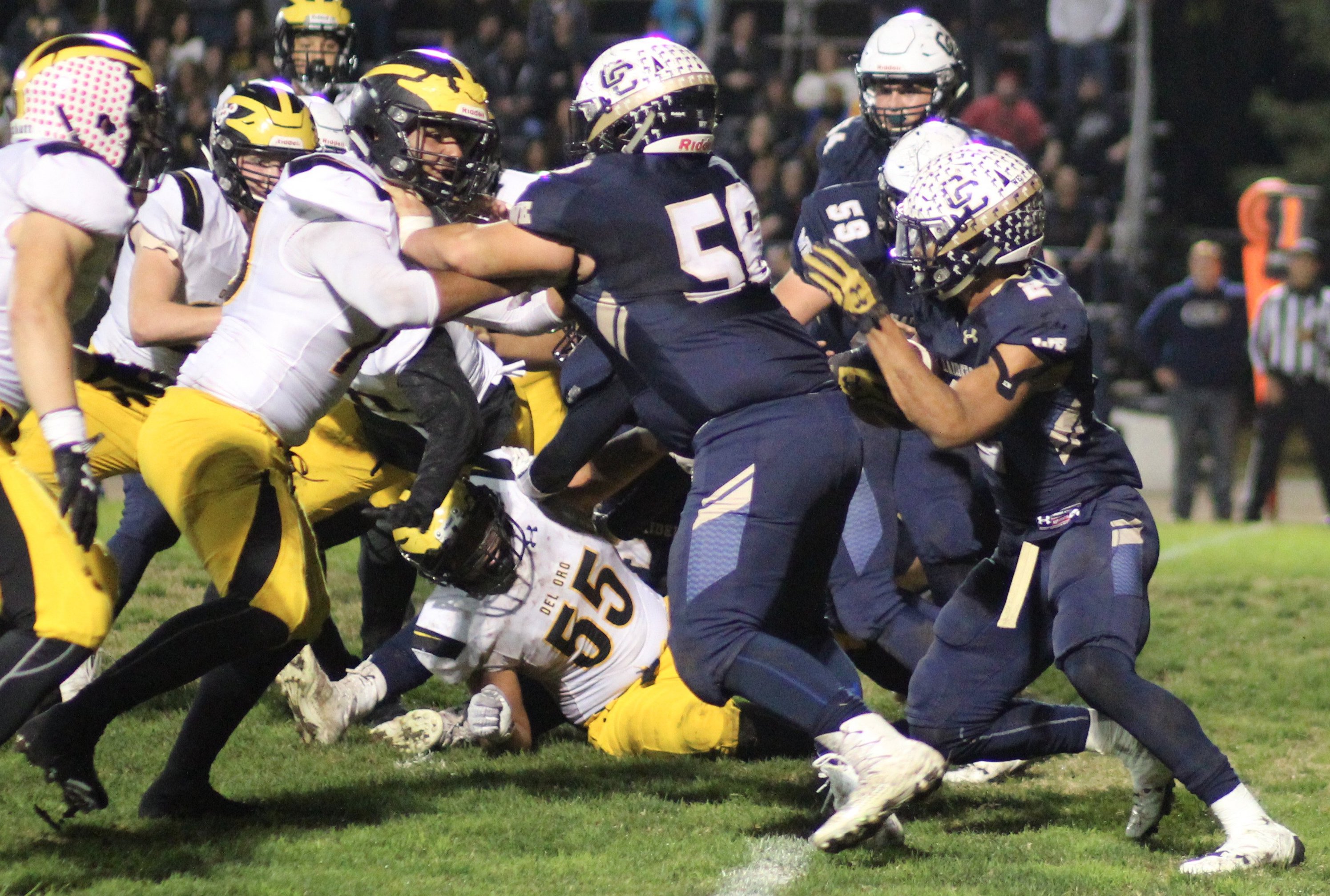 Opening night of the high school football season is fast-approaching and realities are beginning to take shape.

After months of weight room, 7-on-7s and pad-less practices, coaches are starting to take stock of their team’s physicality and nastiness. Do they like to hit? Are they the hammer? Or the nail? Players are settling into roles, and camaraderie and brotherhood builds with each session under a simmering late summer sun. Or, much to a coach’s chagrin, it doesn’t.

As the anticipation grows stronger, so does the lens on The Front Row’s top returning football players. This week we edge closer to the top-10 with the release Nos. 25 through 11, a ridiculous collection of running backs, wide receivers, quarterbacks, linebackers and linemen.

So, without further ado:

25. Kyle Jackson, quarterback, Central Catholic: Jackson started his first game against Manteca last fall, engineering a 31-14 victory over the eventual Sac-Joaquin Section Division III champions. His promising season was dashed by injury in a Week 10 loss to Oakdale. Jackson injured his knee while being tackled and missed the Raiders’ postseason run. Despite his stellar play last fall, Jackson isn’t guaranteed the starting job. Dalton Durossette’s transfer from Ceres complicates matters. Nevertheless, Jackson, with his big body and football acumen, will find a home on the field for the Raiders.

24. Anderson Grover, wide receiver, Downey: Good hands run in the Grover family. One year after his brother and Sacramento State sophomore tight end Calvin Grover led the Knights in receptions, Anderson Grover did the same. The 6-foot senior was Bryce Peterson’s top target in the vaunted “Air Raid” attack, latching onto 53 passes for 806 yards and six touchdowns. As the Knights move into the newly-formed Central California Athletic League with the likes of Gregori and Turlock, the hope is the younger Grover will follow his brother’s trajectory. Calvin’s numbers improved dramatically from his junior to senior season.

23. Jake Dirkse, linebacker, Turlock: The 6-foot-3, 220-pound Dirkse is the next in a long line of defensive standouts at Turlock High. Named the defensive MVP at a UC Davis camp this summer, Dirkse had 55 tackles, two sacks and an interception as the Bulldogs roared to the league title in their final season in the Central California Conference. Just as CCC Defensive Player of the Year Gabriel Cordero (15 sacks) saw his production and opportunities spike last fall, Dirkse can expect the same … unless ball carriers decide to run in the opposite direction!

22. Trabron Russell, running back, Manteca: Russell is ready to be the every-down running back for the Buffaloes, who often deferred to quarterback Gino Campiotti (team-high 115 carries for 595 yards and 15 TDs) to move the ball with either his arm or his feet. Nevertheless, the junior showed flashes of brilliance. Russell rushed for 825 yards and 16 touchdowns and may have topped 1,000 yards if not for an ankle injury. First-year coach Mark Varnum says Russell has added muscle to his 160-pound frame to better handle the physical demands of the Valley Oak League.

21. Garrett Fountain, defensive end, Turlock: Fountain’s production during his junior season won’t blow you away. There were defensive ends with better numbers throughout the southern half of the Sac-Joaquin Section. What is tantalizing about Fountain is his ceiling and what he can become in the right system. Or the right sport. Two Major League Baseball scouts in the area believe Fountain could be a bona fide Division I baseball recruit if he chose the diamond over the gridiron. “If” being the operative word. The 6-foot-4 Fountain has committed to San Diego State, where he’ll look to maximize his potential as a football player. With Fountain and Everett Johnson (Cal), Turlock boasts one of the most formidable lines in the area.

20. Kaden Christensen, running back/defensive back, Escalon: Christensen is primed for a breakout season. The playmaker complimented Trans-Valley League Outstanding Running Back Elliott Mello last fall, but the spotlight should be all his in coach Andrew Beam’s first season. Christensen rushed for 616 yards and nine touchdowns last fall, but had just the fourth-most carries on the team. If Escalon is going to compete for another TVL title and make a serious run at the program’s ninth section banner, Christensen has to be leading from the front. He is the perfect balance of speed and power, a versatile athlete who can run, catch and make you miss.

19. Jorge Cedano, wide receiver, Manteca: Cedano was a breakout star of the 2017 season. He spent the first two seasons in the system as a lower-level quarterback, but moved to wide receiver with Northern Arizona University’s Gino Campiotti entrenched as the starter. After a slow start, Cedano caught fire in the postseason. He had five catches for 67 yards and two touchdowns in a stunning 34-17 victory over top-seeded Oakdale in the Sac-Joaquin Section Division III final, and then closed the season with nine catches in a CIF Northern California Bowl loss to Saint Francis. Cedano had 64 or more receiving yards in five of the Buffaloes’ final seven games and finished with 48 catches for 631 yards and six TDs.

18. Logan Foumai, offensive lineman, Patterson: The Tigers march into the Central California Conference this fall, following the lead of their biggest men. Patterson roared to a Western Athletic Conference title and Division III section semifinal appearance on the strength of its quarterback play and skill players. This season, coach Rob Cozart builds around an experienced offensive line. The leader of that group is Logan Foumai, an all-WAC first team selection on both sides of the ball. Foumai is a 6-foot-1, 275-pound road-grading lineman who helped the Tigers average nearly 500 yards of total offense in 2017.

17. Zaire Eugene, running back, Modesto: After rushing for nearly 1,000 yards on fewer than 100 carries as a sophomore, Eugene’s production dipped in 2017 under first-year coach Brett Wagner. Eugene rushed for 678 yards and six touchdowns as the Panthers played their way into contention in the Modesto Metro Conference. Eugene showcased his big-play ability, averaging 6.2 yards per carry. Yet, for the second consecutive season, his carries were limited. A quick and powerful back, Eugene ran the ball only 109 times as the weight of the offense fell on running quarterback Norvale Howard. Is this the year Modesto turns Eugene loose on Friday nights, feeding him the football 18 to 20 times a game? We hope so.

16. Isaac Sharp, running back/defensive back, Hilmar: Sharp’s storyline followed that of the Yellowjackets’ Jekyll-and-Hyde campaign. After rushing for just 15 yards in a loss to Modesto Christian on Oct. 20, Sharp erupted for 892 yards over the next six games, including a season-high 249 yards as Hilmar avenged its loss to the Crusaders in the Sac-Joaquin Section Division VI final. Sharp capped his season with 232 yards and three touchdowns in a shootout loss to Strathmore in a CIF Northern California Bowl play-in game. Sharp finished with 1,329 yards and 9.3 yards-per-carry average, and was named the Merced Sun-Star’s player of the year.

15. Ryan Daggett, quarterback, Ripon: Daggett has as much upside as any quarterback in the southern half of the Sac-Joaquin Section, and judging by his place on this list, he might have the most upside. Daggett barrels into his third varsity with a head of steam. He guided the Indians to a share of the Trans-Valley League title last fall, earning all-conference honors after passing for 1,115 yards and 15 touchdowns. What should impress college scouts, though, is Daggett’s athleticism. He won the 300-meter hurdles at the Division IV-V meet with a personal best of 40.67 seconds and qualified for Masters, a meet reserved for only the section’s best.

13. C.J. Castleman, running back, Sonora: One of the fastest players in the Sac-Joaquin Section, Castleman was thrown into the fire last season after a rash of injuries threatened to slow the Wildcats’ offense. Castleman helped Sonora recover from the early loss of Kane Rodgers, who suffered a season-ending knee injury against Lodi in the second week. Castleman rushed for more than 1,000 yards and averaged 14 yards per carry, providing the “lightning” to fullback Jack Camara’s “thunder.” How fast is Castleman? He finished seventh in the 100-meter dash and third in the 200 at the Sac-Joaquin Section Division IV-V meet.

12. Chris Mendoza, offensive lineman, Central Catholic: Mendoza’s height and weight may not impress, but his technique and strength make him on the top offensive linemen in the southern half of the Sac-Joaquin Section. Mendoza is a returning all-Valley Oak League first-team selection and a three-year varsity starter for the Raiders, who believe they have the pieces to make a run at the program’s first Sac-Joaquin Section Division II banner. Here’s the truth: Nothing excites coach Roger Canepa more than a dominating run game, and with Mendoza clearing space, he believes sky is the limit for his ground attack.

11. Javyn Drobnick, running back, Big Valley Christian: Drobnick rushed for more than 200 yards four times and positioned himself for a 2,000-yard season before a scary neck injury ended his season. The Lions’ shifty workhorse finished his breakout season with 1,608 yards, among the southern section’s best, and 20 touchdowns on just 176 carries. He averaged more than 9 yards per carry for Big Valley Christian, which won its first nine games of the season under first-year coach Brian Berkefeld. If he can stay healthy and take the Lions on a long postseason journey, Drobnick could challenge the area’s single-season rushing record of 2,851 yards set by Oakdale’s Will Semone in 2016.