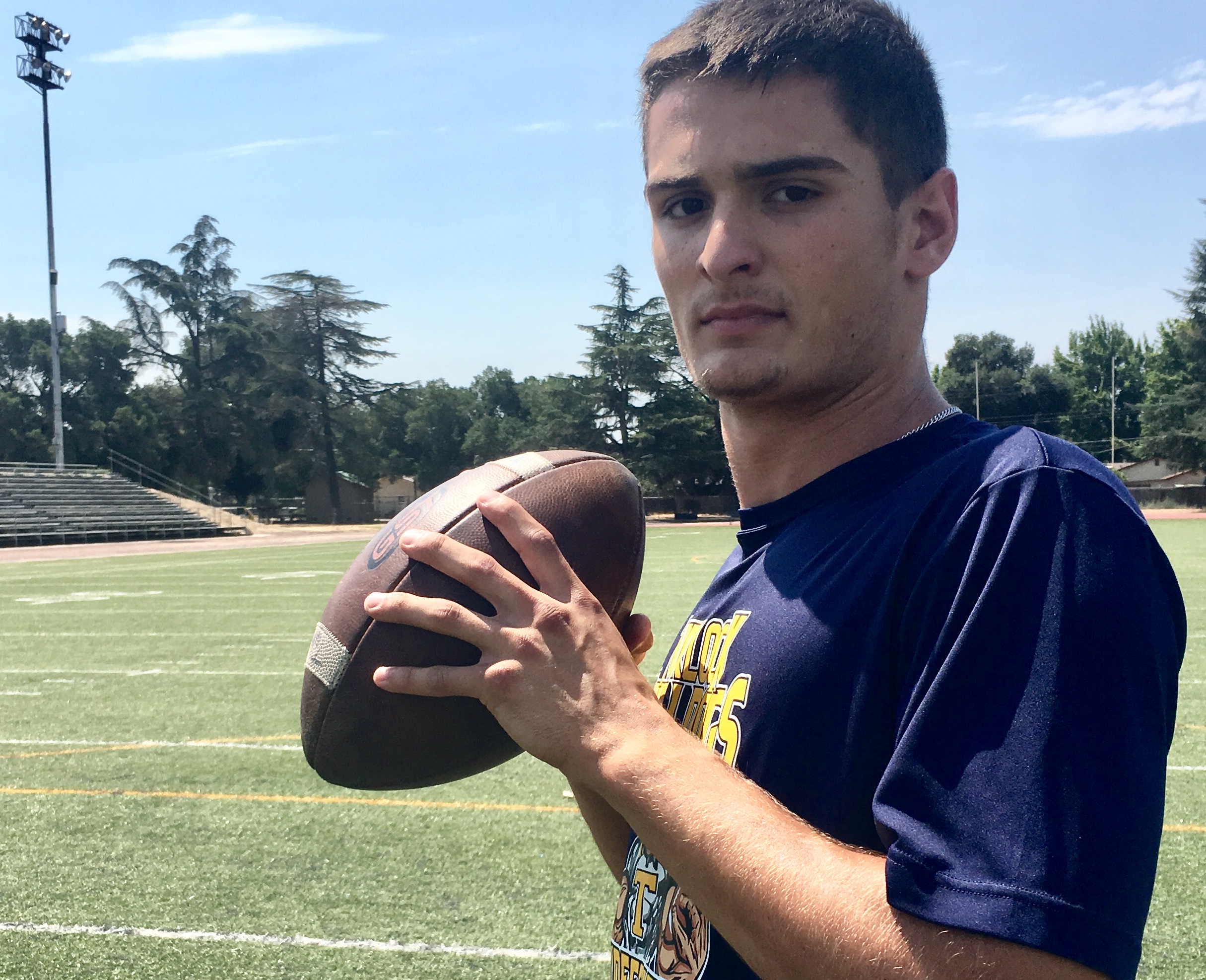 This week’s installment of the Front Row’s top-50 returning high school football players features a run on senior quarterbacks, two big-bodied prospects gathering attention from Pac-12 coaches, and high-octane running backs looking to go zero to 100 … and then 100 to 1,000.

40. Charles Jackson, running back, Atwater: Only a junior, Jackson might be the most electric player in Falcon blue since Nathan Sanchez, who played at Modesto Junior College and Humboldt State after graduating from Atwater in 2009. Jackson rushed for 951 yards and 10 touchdowns last fall, including a season-high 232 yards and three touchdowns in a win over Ceres. The schedule sets up nicely for Atwater; its first three opponents were a combined 11-20 last season.

39. Hayden Sauser, quarterback, Modesto Christian: After losing four of its first five games, Modesto Christian made a switch at quarterback, inserting the 6-foot-2 Sauser. The move worked wonders for the Crusaders, who captured a share of the Trans-Valley League title and earned a Division VI section final appearance. Sauser was 5-2 as the starter with 928 yards and eight touchdowns, but sat out the section final with an injury.

38. Dalton Durossette, quarterback, Central Catholic: Already one of the southern section’s top all-around athletes, Durossette’s transfer from Ceres to Central Catholic made him one of the most polarizing, too. The 6-foot-2 gunslinger won’t have to sit out the first 30 days, which means the Raiders have a full-blown quarterback competition on their hands. Durossette proved himself at Ceres, where he started for an underwhelming varsity team as a sophomore. He completed 135 of his 247 passes and threw for 1,709 yards and 16 touchdowns.

37. Trey Longstreth, wide receiver/defensive back, Gregori: Last fall, Longstreth (30 tackles, 727 all-purpose yards, four touchdowns) often played in the shadow of his twin brother, Marcello Longstreth, and the Jaguars’ star-studded senior class, which included Arizona State-bound quarterback Bobby Avina and Brown-bound Gabe Sanchez. However, coach Jason McCoy plans to showcase Trey Longstreth on both sides of the ball. With track speed, Trey will stretch the field as a wideout and serve as one of the team’s lockdown cornerbacks.

36. Justin Traina, defensive back, Central Catholic: Traina emerged as a takeaway artist for the Raiders. The 6-foot-3 corner back picked off four passes, second only to graduated safety Emilio Guajardo. A multi-sport athlete, Traina appeared in all 12 games for the Raiders, amassing 33 tackles, six pass deflections and one fumble recovery. He’s also an underrated wide receiver. Lost in the theatrics of the final minutes against Oakdale in Week 10 was Traina’s offensive explosion. He had a season-high four catches for 95 yards in the loss.

35. Nash Satnat, linebacker, Escalon: The 6-foot-2, 200-pound Satnat is a scary proposition between the tackles. Satnat anchored Escalon’s defense last fall, recording a team-high 97 tackles en route to the Trans-Valley League’s Outstanding Linebacker award. He had four games with 10 or more tackles, including a season-high 17 in a thrilling 41-38 loss to Hilmar in the Sac-Joaquin Section Division VI semifinal round.

34. Payton Bass, running back, Pitman: Bass turned in one of the top individual efforts of the 2017 season, rushing for 256 yards and six touchdowns against Merced. The younger brother of Modesto Junior College sophomore running back and former Pitman star Devan Bass, the 6-foot Payton has a chance to write his own chapter in program history. He is a two-way player and looked upon as a leader for the Pride, who enter their first season in the Central California Athletic League.

33. Justin Rentfro, running back/defensive end, Hilmar: Rentfro shouldered a heavy load for the Yellowjackets. He rushed for 711 yards and four touchdowns, providing balance to coach Frank Marques’ spread offense. Rentfro found his stride late in the season, like so many of his Yellowjacket teammates. He rushed for 109 yards in a wild playoff win over Escalon and 143 yards and two touchdowns in a one-point loss to Strathmore in a CIF Northern California Bowl play-in game. He also registered 97 tackles and four sacks, squeezing every ounce of energy out of a 210-pound frame.

32. Dhameer Warren, quarterback/defensive back, Merced: A freakish athlete, Warren enters his third season under center for the Bears. He might be the southern section’s top dual-threat quarterback, a player with explosive speed and talent galore at the skill positions. Warren threw for 1,505 yards and 14 touchdowns last fall, but will need to work on his efficiency. He threw more interceptions (15) than touchdowns and competed 53.5 percent of his passes. Warren also rushed for 527 yards and seven touchdowns.

31. Jacob Bettencourt, quarterback, Orestimba: Bettencourt announced himself early, erupting for a season-high 336 yards and four touchdowns in a season-opening rout of Mendota, a Central Section power. Bettencourt never cooled off. He closed his junior season with 2,170 yards and 28 touchdown passes, leading Orestimba to its third straight perfect Southern League campaign. Over his final seven games, Bettencourt sported a touchdown-to-interception ratio of 19 to 3. He will challenge school passing records set by former Utah State quarterback Bryan Black, 2,554 yards and 28 touchdowns in 2001.

30. Tramayne Paster, defensive back, Buhach Colony: Paster appeared in just four games last fall after transferring from Stone Ridge Christian. He made a quick impression, totaling 13 tackles and an interception. Paster is cut from the same mold as former Thunder teammate L.J. Wallace, a 6-foot-3 cornerback now playing on scholarship at Colorado. Paster is 6-2 with strong interest from Division I schools like Arizona State, Colorado, Fresno State and Nevada (offer).

29. Marquise Higgins, linebacker/wide receiver, East Union: College coaches made a point to stop by East Union this summer because of one can’t-miss prospect — Higgins, a 6-foot-3, 225-pound defensive end and tight end. Though his numbers were modest, Higgins has the body type and athletic ability to grow into a Division I player. Oregon State’s Mike Riley was among the many coaches to pass through coach Willie Herrera’s classroom. Higgins had just one catch for 14 yards and 18 tackles in just eight games. However, two of his tackles resulted in a fumble.

28. Omar Ortega, offensive lineman, Patterson: The 6-foot-5, 275-pound tackle helped protect one of the most prolific quarterbacks in the Sac-Joaquin Section last fall. With Ortega locking down the right edge, Sanchez was free to create in the Tigers’ unique “Spread ’em and Shred ’em” offense. Sanchez was tops among southern section quarterbacks with 39 touchdown passes and he was the only QB in the region to throw for 2,500 yards and rush for 1,000.

27. Antonio Lopez, running back, Los Banos: Lopez set a blistering pace last fall with five straight 100-yard games to start the season, including a season-best 254-yard, three-touchdown performance in a win over Golden Valley. He finished with 1,318 yards and 16 touchdowns for the Tigers, who finished on the heels of champion Patterson in the Western Athletic Conference. With struggling programs like Johansen and Davis moving into the WAC and the departure of Central Valley and Patterson, Lopez could run wild this fall.

26. Jonah Kosakiewicz, quarterback, Turlock: In his first season under center, the 6-foot-2 Kosakiewicz led the Bulldogs to a Central California Conference championship and Division I playoff berth. He was efficient in a run-oriented offense, completing nearly 61 percent of his passes for 830 yards and 10 touchdowns. He also showcased his athleticism, finishing second on the team with 326 rushing yards and four TDs. Kosakiewicz has had a busy summer, venturing to camps near and far, including USC, Sacramento State and Cal Poly.