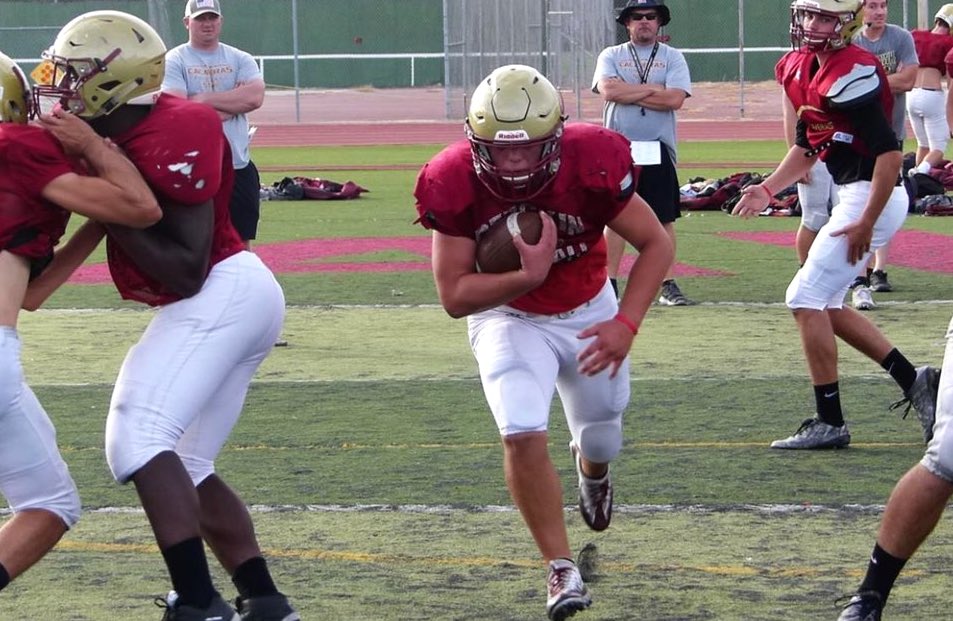 Calaveras High's Logan Weatherby is one of the top two-way talents in the Mother Lode League, a player who ranks first among the team's returning players in tackles and scoring. (Guy Dossi/Calaveras Enterprise)

They’ve been in the gym, ear buds drowning out the sound of iron and grunts. They’ve been at the park running under throws at dusk, visualizing themselves racing up the seam and into the end zone.

They’ve leaned out. They’ve bulked up.

They’ve prepared their bodies and minds to take the next step. They are the southern Sac-Joaquin Section’s top returning high school football players.

Front Row Sports will countdown to the season’s opening kickoff on Aug. 17 with its list of the top-50 returning players. This pool  — along with a sizable and no-less-valuable "Best of the Rest" — wouldn’t have been possible without the insight of area coaches and sports reporters.

50. Sean McGovern, defensive back/wide receiver, Ripon Christian: As a sophomore, McGovern’s length (6-foot-1) and nose for the football made him an all-Southern League first-team selection. McGovern is the Knights’ top returning receiver after reeling in 16 catches for 240 yards and two touchdowns. He also picked off three passes — second most on the team — and caused one fumble. Of his 73 tackles, 45 were solo stops. With the return of offensive coordinator Randy Fasani, a former NFL quarterback and California high school legend, the Knights should be more consistent through the air ... which should make McGovern giddy.

49. Bryan Millan, wide receiver/defensive back/kicker, Hilmar: A jack of all trades for the Yellowjackets, Millan can kick it, run it, tackle it and pick it off. He converted 52 of his 58 extra-point attempts last fall and seven of his nine field goal attempts with a long 43 yards en route to all-Trans-Valley League honors. What’s more, he rushed the ball for 145 yards and a touchdown, had at least one reception in seven games, and intercepted three balls, including one in a 42-13 victory over Modesto Christian in the Sac-Joaquin Section Division VI final.

48. Logan Weatherby, running back/linebacker, Calaveras: Weatherby is Calaveras’ top returning scorer and tackler. The 6-foot, 200-pound senior rushed for 240 yards and four touchdowns on just 32 carries, averaging nearly 8 yards a rush. Defensively, he was second on the team in tackles, according to MaxPreps, and had one sack and an interception for a team that finished second in the Mother Lode League and earned a No. 2 seed in the Sac-Joaquin Section Division V playoffs. Calaveras graduated a lot of talent, so Weatherby’s leadership abilities may be tested. Calaveras will lean heavily on a junior class that went 8-1-1 and won the league title in 2017.

47. Isaac Schinnman, running back/linebacker, Modesto Christian: The 6-foot, 200-pound Schinnman packs a punch on both sides of the ball. Last season, he rushed for 336 yards and six touchdowns on 60 carries, averaging 5.6 yards a tote. He also racked up 76 tackles from the outside linebacker position. At the Lake Tahoe camp this summer, Schinnman took home two awards: All-Camp and power clean champion with a personal best of 270 pounds, according to video shared on social media. He’s part of a talented senior class that includes quarterback Hayden Sauser, running back Jose Hernandez and Wright. Schinnman's grit and versatility is great, but his leadership is invaluable for a small-rostered program. Schinnman asserted himself as a leader during spring ball, taking the baton from coach Mike Parson's hands.

46. JoJo Espinosa, wide receiver/free safety, East Union: The Lancers replaced Jack Weaver, now a redshirt freshman at Modesto Junior College, with another run-and-gun quarterback in Espinosa (70 of 131 passing, 875 yards, 357 rushing yards) in 2017. Though he flourished, East Union has decided to go with another up-and-coming QB in Eric Morales, a junior with an accurate arm and sprinter's speed. The move allows Espinosa to showcase his athleticism at wide receiver, running back and defensive back. Here’s what the East Union staff loves about Espinosa, now that he’s no longer shackled by the responsibilities of quarterback: The kid loves to hit, has excellent hands and is shifty in space.

45. Ryan Kraft, quarterback, Bret Harte: The Bullfrog offense flows through Kraft, a 6-foot senior who has the ability to create with his arm and feet. Kraft is entering his third season as Bret Harte’s starting quarterback and there’s reason to believe his final campaign could be special. In each his first two seasons under center, Kraft has seen a significant jump in production. He accounted for 2,055 all-purpose yards last fall, including 1,467 through the air and another 588 on the ground. He owns the school record for career touchdowns. Kraft was the Calaveras Enterprise's Male Athlete of the Year runner-up in 2017-18 after earning all-league honors in football (first team) and baseball (second team).

44. Xavier Rodriguez, quarterback, Davis: Rodriguez split time under center last fall for the Spartans, but the job is his this season. Rodriguez has impressed coach Tim Garcia with his command of the huddle and handle of the offense, and Garcia believes Rodriguez could be in line for a breakout year with the amount of talent split out wide. Rodriguez has five capable targets, including King Mitchell, Michael Sherrod, Nick Arrieta, Neimiah Jones and Elijah Jones. As a junior, Rodriguez completed 143 of his 239 passes for 1,923 yards and 10 touchdowns. If he can stay healthy, Rodriguez could put up big numbers in the Spartans' first year in the Western Athletic Conference.

43. Joao Silveira, linebacker, Hilmar: Silveira was one of the top tacklers on a defense that swarmed to the football. He registered 103 tackles for the Yellowjackets, one of three with more than 100 stops. He also had four sacks and two fumble recoveries. While Silveira isn’t a physically imposing linebacker, the 5-foot-8 senior loves a full-speed collision. He had 68 solo tackles, including a season-high 10 against Ripon.

42. Landon Wright, defensive line, Modesto Christian: A three-year varsity starter, Wright isn’t the biggest lineman in the trenches for the Crusaders, but the 6-foot-3, 285-pound senior still kicks an impressive shadow. His snarl ain't half bad, either. Coach Parsons believes Wright's persona between the white lines gives Modesto Christian an edge. Simply: He's the wrong guy to run at. With just 19 in uniform, Modesto Christian lacks depth everywhere — except along the offensive and defensive lines. Wright will be expected to bottle up the Trans-Valley League’s seemingly endless run of running backs and protect quarterback Sauser, a late-season revelation last fall.

41. Xavier Stewart, wide receiver, Merced: Stewart is the top down-field option in the Merced attack. The 6-foot-2 senior enters his third season at the varsity level, and if he and third-year quarterback Dhameer Warren can sync up, Stewart could put up goofy numbers. He had 586 yards and nine touchdowns on 43 catches last fall, and was named to the all-Central California Conference first team. For Merced to return to the top of the league table, though, Stewart may have to become a steady force in the other phases.