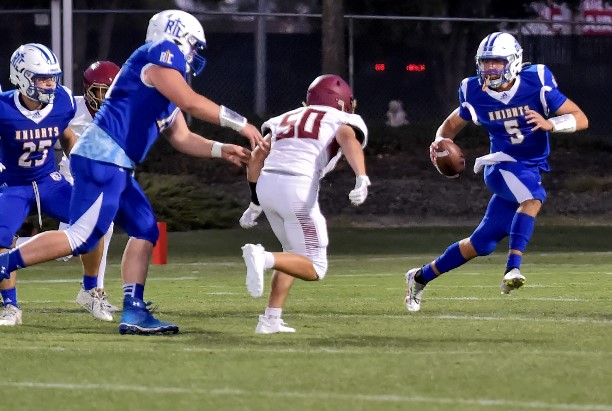 Ripon Christian quarterback Trey Fasani eludes pressure and keeps his vision down field in a 27-6 victory over Calaveras on Friday, Sept. 3, 2022. (Gary Jensen/greatshots49@gmail.com)

RIPON — Uh-oh. These were Grant Sonke’s last words before collapsing on the sideline with a calf cramp, but as any warrior does, Sonke powered through for an impressive night on both sides of the ball.

Sonke’s 40-yard run led to the first scoring play of the game in Ripon Christian’s 27-6 victory over Calaveras on Friday evening. Sonke’s run set up a 4-yard touchdown rush by Derek VanElderen, giving the Knights a lead they wouldn’t surrender.

On the defensive side, Sonke turned in five tackles in an admirable effort.

“Yeah,  (I was thinking) don’t cramp,” Sonke said with a laugh. “I just got to tough it through.”

Thanks in part to Sonke, the Knights' defense didn’t allow a first down in the first half, stifling a Calaveras offense that has been slow to start this season. Calaveras' lone score was its first since the first play of Week 1.

With the momentum already on the Knights’ side, touted prospect Trey Fasani and the Ripon Christian offense reached into its bag of tricks to set up a nifty double-reverse 38-yard touchdown pass from Fasani to Griffin De Abreu, who found the end zone twice as the Knights vexed a traditional foothill power. The ball was snapped to Fasani, pitching it to a pulling running back, who tossed it to another man in motion before the Fasani-De Abreu connection was made.

“We practiced it the whole week, couple times, but we were looking at (Calaveras’) defense, and we knew that safety was reading us, so that fake was a good play,” said De Abreu.

Fasani, a three-star prospect under center and the son of former NFL quarterback and Ripon Christian head coach Randy Fasani, shared similar insight on the play.

“We just knew that (the defense) would bite on the reverse, and I trust (De Abreu) to get there and make the catch.”

Fasani spoke highly of his receiver’s work on the play, calling De Abreu a “great receiver”. Great receivers turn in great performances, he said, and De Abreu answered the call. With a slash line of five catches/63 yards/two touchdowns, De Abreu earned the FrontRowP.comreps player of the game.

The Knights (2-1) head into a two-week break, while Calaveras looks to right the ship next week at Ripon High, big winners over McClatchy of Sacramento.