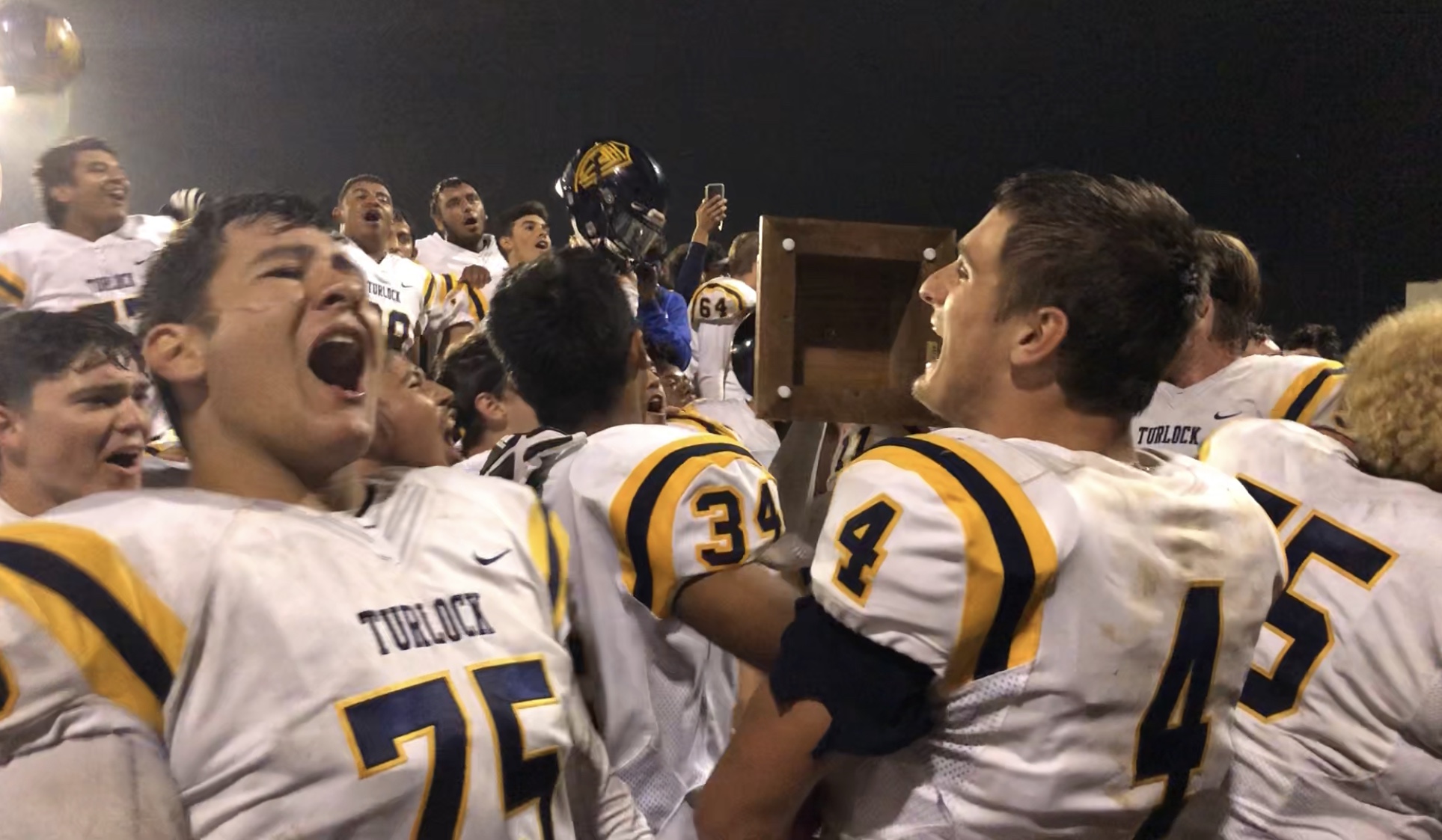 Turlock High football players celebratre their 33-0 victory over crosstown rival Pitman in the annual Harvest Bowl. The Bulldogs (7-3) spoiled the Pride's bid for a perfect season and, in doing so, captured the inaugural Central California Athletic League championship.

Turlock High won the Central California Athletic League's inaugural league championship with a convincing 33-0 victory over crosstown rival Pitman in the annual Harvest Bowl in front of a capacity crowd of more than 3,400 Friday at Joe Debely Stadium.

The win is the fifth consecutive in the series for Turlock, which finishes the regular season 7-3 and 5-0 in the CCAL, a league in its first year of operation. Pitman, which had been vying for a perfect regular season, drops to 9-1 and 4-1.

Turlock and Pitman moved into the newly formed CCAL from the Central California Conference, where the Bulldogs won the previous two championships.

"This is probably one of the most satisfying wins since I started playing football," said 6-foot-7, 305-pound junior offensive lineman Everett Johnson, who has committed to play at Cal. "WE came in knowing we were going to get their best game. They were 9-0 for a reason, that doesn't just happen. We had to come in, play our game and execute."

Both teams are locks to make the Sac-Joaquin Section playoffs and will learn their seeding when the section office releases its playoff pairings Saturday afternoon at around 4:30 p.m. With both teams likely to be awarded first-round home games, Pitman would have to use Debely Stadium on Thursday, while the Bulldogs would get a Friday game.

The shutout was the first for Turlock's defense this year. The Bulldogs held Pitman to just 157 yards of total offense. On Pitman's 11 offensive possessions, the Pride punted eight times, turned the ball over on downs and threw an interception. Pitman's final possession ended when the buzzer sounded to end the game.

Pitman's ground defense was as stout as Turlock's, limiting the Bulldogs to just 91 yards, but the Pride couldn't stop Bulldogs quarterback Jonah Kosakiewicz, who was 9 of 15 for 273 yards and two touchdown passes. Kosakiewicz and Cameron Sherwood hooked up on third-and-3 for a 67-yard strike with 5:01 to play in the first quarter. Christian Gardner's PAT made it 7-0.

"I thought our defensive line did a good job tonight," said Pitman head coach Tom Tyler, who coached the Bulldogs from 1996-2005. "They couldn't run inside against us. They're more of a C-gap and outside edge team, but we stopped them inside and we stopped the fly sweep."

Pitman outgained Turlock on the ground 121-91, and more than half of the Bulldogs' 91 yards came on one play in the fourth quarter. And when Kosakiewicz dropped back to pass, he was rarely comfortable in the pocket. But the fleet-footed Turlock quarterback was able to buy time and often found a receiver downfield.

"Our offensive coordinator (Vince Zipser) did a good job of creating mismatches to throw the ball downfield," said Turlock head coach James Peterson, a graduate of Turlock High who played, and later coached, for Tyler. "Third and long was huge for us, to be able to convert."

"Things just didn't go our way tonight, and we've made plays all year," said Tyler. "We couldn't get off the field on third-and-long and sometimes it goes that way."

The Bulldogs made it 21-0 when Kosakiewicz again found Sherwood, this time from 4 yards out, on fourth-and-goal with 1:10 to play in the half.

Gardner's ensuing kickoff went into the end zone for a touchback and Pitman set up on its own 20. But three plays netted 4 yards and the Pride's punt from their 16 traveled only nine yards, giving the Bulldogs a chance to attempt a 43-yard field goal with 1.1 seconds showing on the clock. Gardner's kick was true and Turlock ran into the locker room at halftime leading 24-0.

Gardner added a 23-yard FG in third quarter and Frias closed out the scoring with a 55-yard burst with 6:18 remaining in the contest.

Pitman now has to pick up the pieces following the disappointment of suffering their first loss of the season, at the hands of their archrival, in the CCAL's inaugural championship game.

"To me, 10 wins is very special, and we're one win away," said Tyler. "And we're got to be a good team to get it, but we've worked too hard and have too much character to not bounce back."