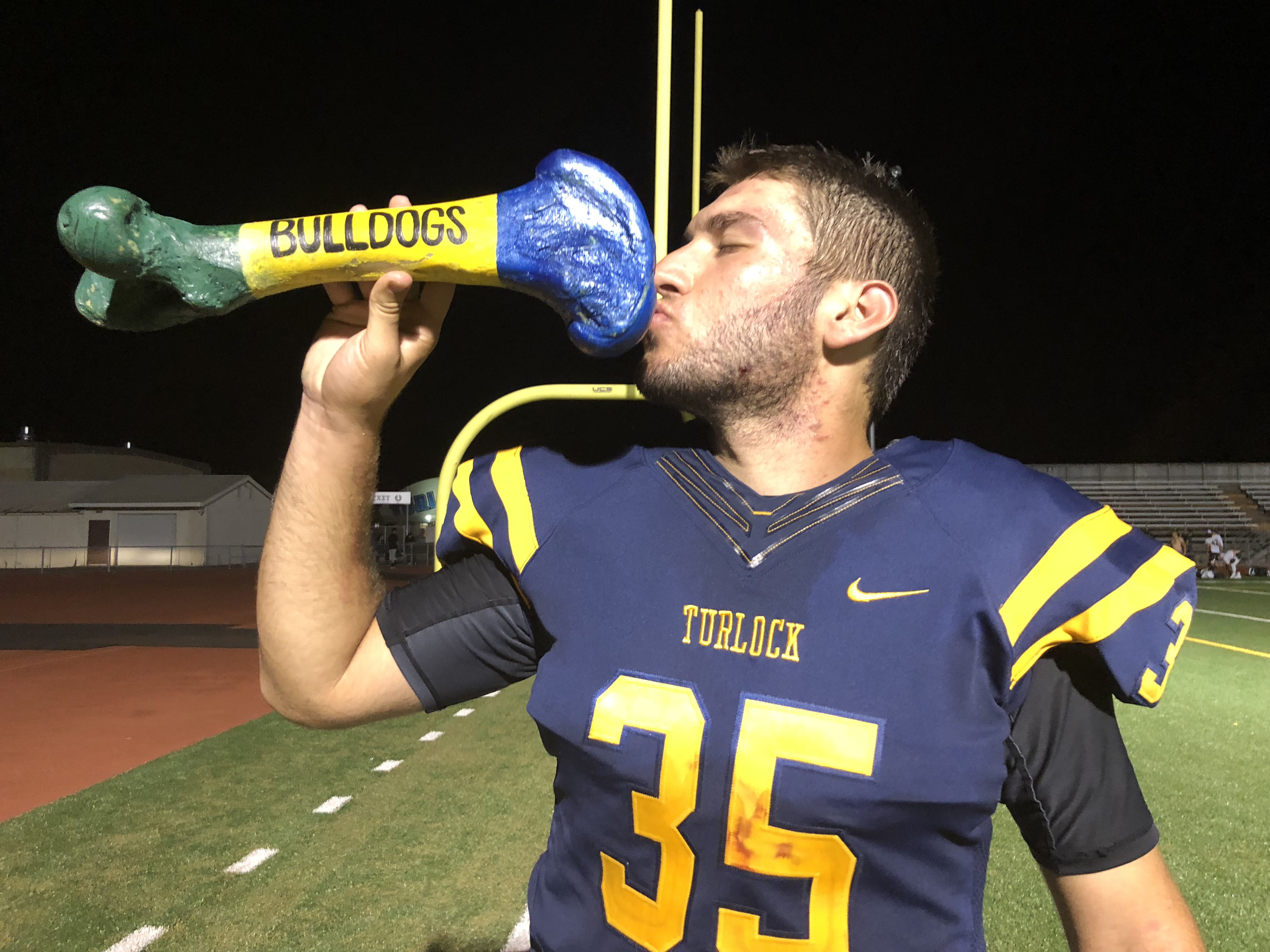 Cameron Sherwood welcomes The Bone back to Turlock High after the Bulldogs defeated the Tracy Bulldogs 28-17 Friday night at Joe Debely Field.

Bad to the Bone: Which defensive star helped Turlock reclaim the 'Dog Bone'?

He wanted somebody on his team to intercept a pass and return it all the way for a score. San Diego State-bound Garrett Fountain was nearly that somebody.

Fountain picked off a pass with 4:16 to play in the third quarter, snuffing out a potential go-ahead drive by Tracy and helping his Bulldogs regain their footing on their way to a 28-17 non-conference victory Friday night at Joe Debely Stadium in the Battle for the Bone.

With 4:32 left in the third quarter and Turlock nursing a 21-17 lead, Turlock was marching but fumbled the ball in Tracy territory. Instead of punching to make it a two-score margin, Turlock handed Tracy a giftwrapped opportunity to take its first lead of the contest.

But on Tracy's first play from scrimmage, Fountain stepped in front of a Logan Fife pass and returned it to Tracy's 17  with 4:16 remaining in the third.

That was a huge play because, obviously, Tracy had been knocking on the door and I was thinking, 'I don't know if we can get a stop,' said Peterson, whose team has bounced back with consecutive victories after dropping the season opener 42-35 to Freedom (Oakley). "The very next play, our biggest player on the defense comes up big with a pick. And I think if would've had a little more room he would've took it to the house, too."

Fountain looked poised to make it a pick-six, but he was dragged down at the 17. Nevertheless, the pick swung the momentum back to Turlock and they eventually made it 28-17 when quarterback Jonah Kosakiewicz, who couldn't find an open receiver, tucked the ball and scampered in from 10 yards out with 5:41 to play in the fourth quarter.

Lucas Curtis scored two touchdowns for the Bulldogs, putting them up 7-0 on a 19-yard run with 3:12 remaining in the first quarter, and then again with a 4-yard burst with 9:36 to play in the third, giving Turlock a 21-10 advantage

"We just had to come out here and play physical and that's exactly what we did all four quarters," said Curtis. "And that's what we said at halftime, too: 'Just got to grind it out. This is a good team.' "

Turlock went up 14-0 9:39 left in the first half when Kosakiewicz hooked up with Cameron Sherwood on a 51-yard scoring strike.

Tracy drove the ball to midfield on the game's first possession, but turned the ball over when outside linebacker Casey Carr pounced on a fumble that was created by cornerback Oscar Cruz.

Both teams carry the nickname Bulldogs, and the winner of this annual rivalry takes home a large bone painted blue (Turlock), green (Tracy) and gold (their common color). Since renewing their rivalry in 2014, the teams now have met seven times — twice in the playoffs — Tracy holding a 4-3 advantage, including victories in both postseason affairs.