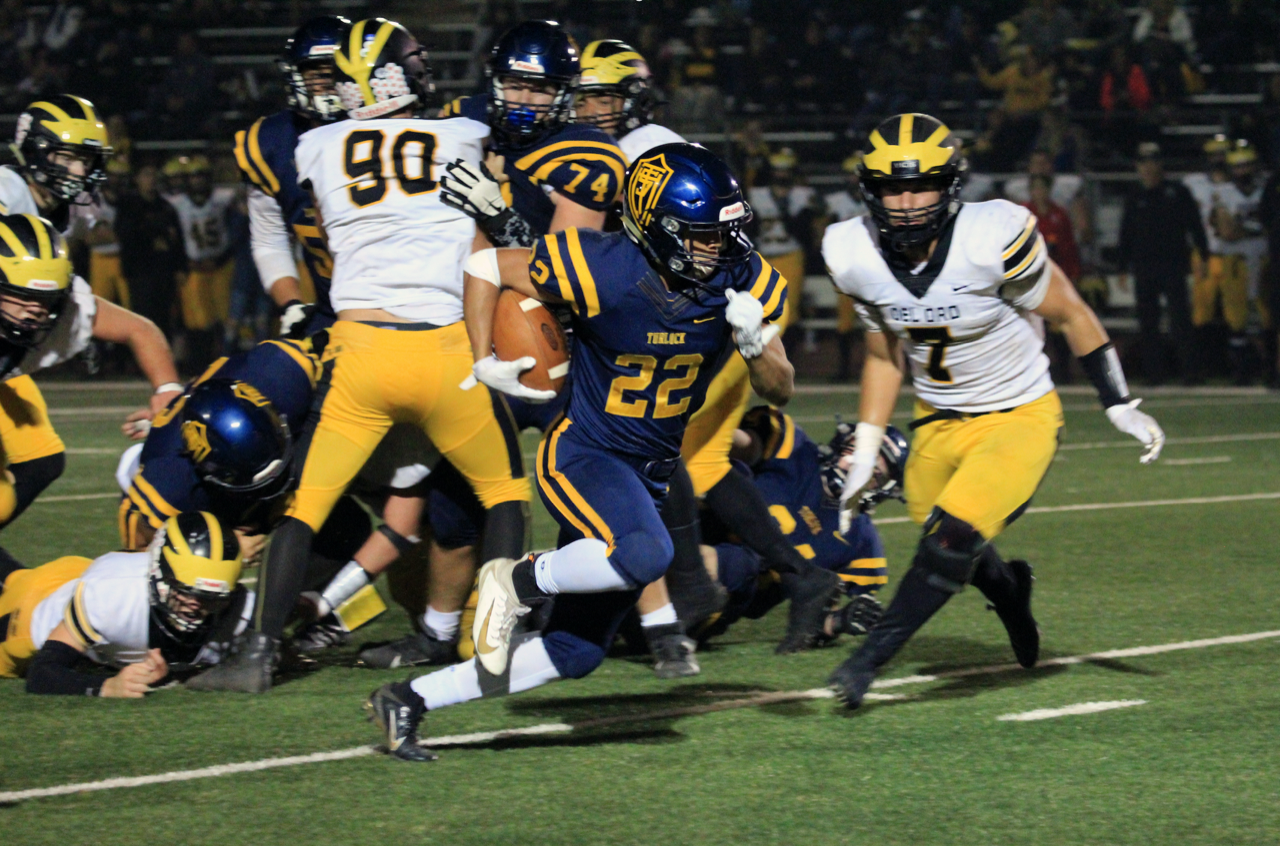 Turlock's Josiah Gonzales breaks for daylight during the Bulldogs' 42-21 victory over Del Oro in the first round of the CIF Sac-Joaquin Section Division I playoffs on Friday, Nov. 8, 2019, at Joe Debely Stadium in Turlock, Calif. (Joe Cortez/Front Row Preps)

No. 7 Turlock (9-2), the champion of the Central California Athletic League in the regular season, advances to play second-seeded Oak Grove, a four-time section champion in Division II, on Friday in El Dorado Hills.

Oak Grove and Del Oro both are members of the Sierra Foothill League, regarded as the toughest in al the section. Oak Grove defeated the Golden Eagles 38-15 last month.

In No. 10 Del Oro, the Bulldogs were facing the second-winningest program in the history of the Sac-Joaquin Section with 11 championship banners and 18 trips to the big game. The Golden Eagles rank behind only Central Catholic (19 titles), which they defeated in last year’s D-II final, 20-17.

Turlock cornerback Tyran Montgomery had half of the Bulldogs’ turnovers, with two interceptions and a fumble recovery.

“I feel like we’ve played good defense all year,” said Turlock head coach James Peterson. “The offense, when they can do that, what they did by throwing the ball tonight … pretty deadly team to face.”

Pasley, who completed 14 of 23 passes for 277 yards and four touchdowns, hit Holden Baldwin on a 33-yard scoring strike to give the Bulldogs their biggest lead of the night at 35-7 6:57 left in the fourth quarter.

Baldwin hauled in seven of Pasley’s 14 competition for 163 yards.

With two 5:05 to play, Del Oro was suddenly very much in the game.

“We had a couple of injuries and guys had to come off the field so our personnel got a little tweaked,” said Peterson. “So, really, honestly, when they started getting into us, it was my fault. We had the wrong personnel in. I’ll fix it, though. We’ll get it right.”

Pasley hit Anthony Frias from 3 yards out to produce the final margin.

The Bulldogs opened up a 21-7 lead before halftime, scoring twice in the final 45 second. Cade Gilbert scored from 10 yards out. Then, following an interception by the Bulldogs, Pasley hit Dalton Linn from 28 yards with 21 seconds to play.

Turlock opened the scoring in the first half when Josiah Gonzales scored from 22 yards out with 1:08 to play in the third quarter.

Del Oro was promoted into the Division I playoff field based on the section's continued success rule. The Golden Eagles had won four the previous six D-II championships.