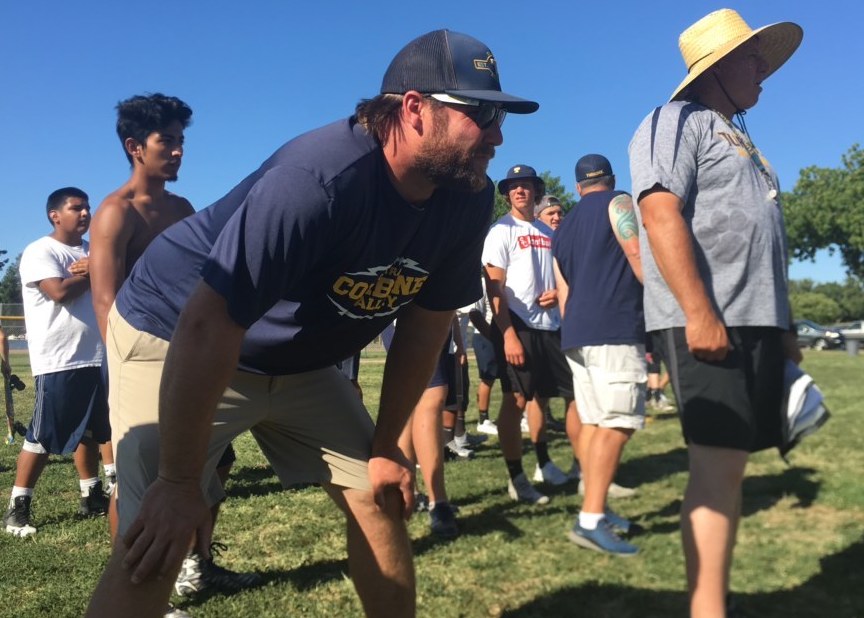 Turlock will be hunted team in new CCAL

There's a little piece of Turlock High football coach James Peterson that wishes his Bulldogs still were a part of the Central California Conference.

After a 12-year championship drought, Turlock High is the two-time defending CCC champion and was a strong contender to earn a third straight crown. But the Sac-Joaquin Section realigned its conferences and the Bulldogs find themselves charter members of the Central California Athletic League, along with crosstown rival Pitman, Downey, Gregori, Enochs and traditional rival Modesto.

So while defense of the CCC titles no longer is the goal, winning the inaugural CCAL championship is. And Peterson knows that Turlock, coming from the universally higher-regarded CCC, will be circled on everybody's schedule.

"I'd love to still be playing in the Central California Conference," said Peterson, entering his 10th season as the Bulldogs head coach. "It's tradition, and Turlock is all about tradition. But we're excited about the opportunity to try and clinch the first CCAL title."

"That's why we're playing a big preseason," said Peterson, who is 54-42 as the Bulldogs head coach."We want to be champions. We want to be ready."

Once again, the Bulldogs find it necessary to replace key players on both sides of the ball. Following the 2016 championship season, Turlock graduated the CCC's Most Valuable Player and Defensive Player of the Year in quarterback Danny Velasquez and defensive end Mustafa Johnson. This year, they'll need to replace league MVP Dustin Grein. After playing for Modesto Junior College last year, Johnson and Velasquez are moving on to Colorado and Portland State, respectively. Grein will play this season at Cal-Poly. But there will be plenty of talent roaming the sidelines of Joe Debely Stadium this fall.

Quarterback Jonah Kosakiewicz (6-2, 185) is back for a senior season and he'll be protected by 6-foot-8, 290-pound junior offensive lineman Everett Johnson, who has already verbally committed to play at Cal. Linebacker Jake Dirske (6-3, 220) and tight end Garret Fountain (6-4, 215), whom Kosakiewicz describes as "a man among boys," also are expected to be among the top players in the new conference. Fountain has committed to San Diego State.

"We definitely have a target on our back," said Peterson, whose team won 13 consecutive league games dating back to a 2015 loss to Merced. "Nobody in this league is going to look past us. We're the two-time defending CCC champions."