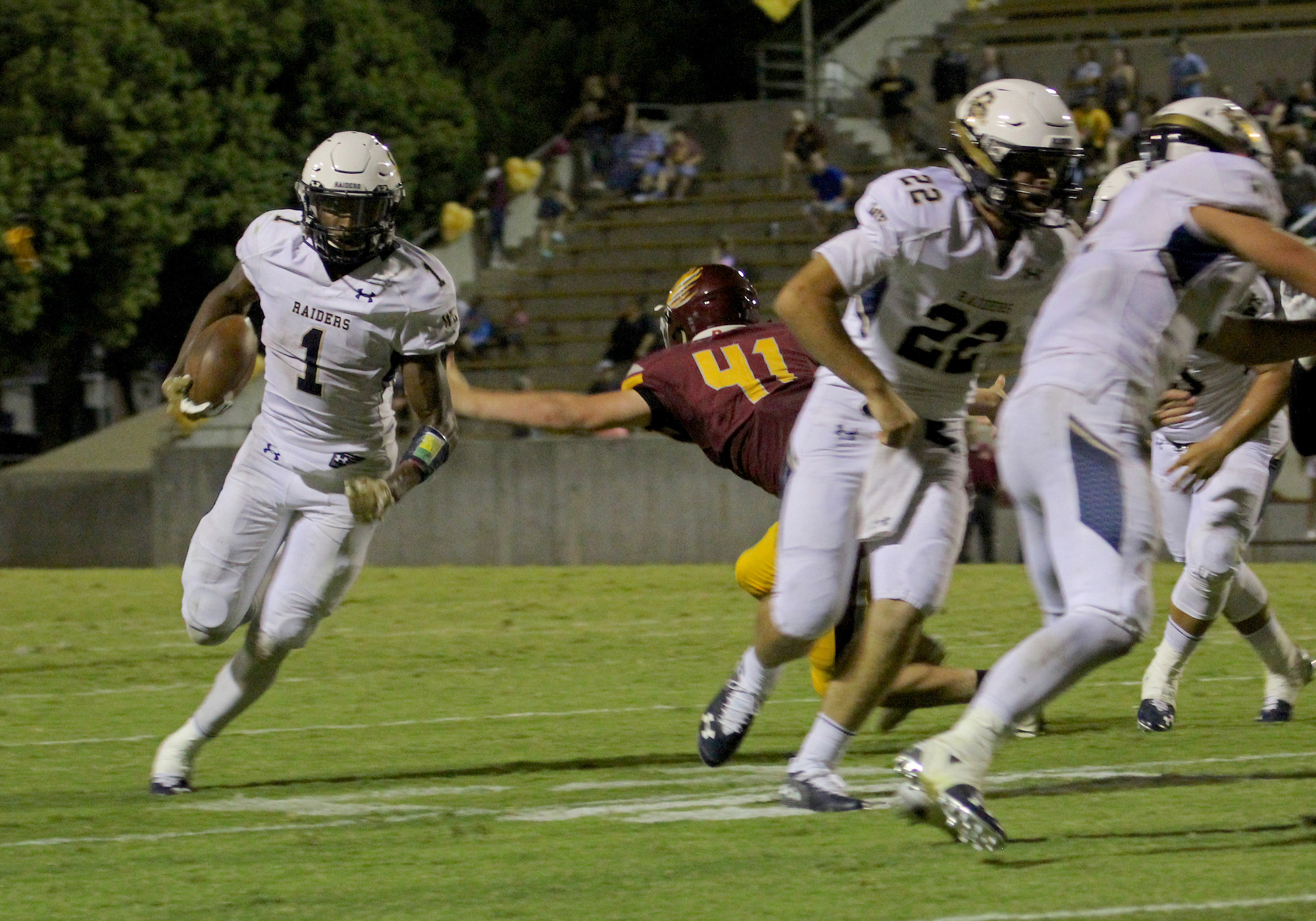 Central Catholic running back Dawaiian McNeely turns the corner on the Clovis West defense in a 21-0 victory on Friday, Aug. 17, 2018. McNeely rushed for more than 100 yards, but will face De La Salle and its top-ranked defense this week. (Samantha Schmidt)

Musical chairs: Plenty of movement in large-school poll, except at No. 1

1. (1) Central Catholic (1-0): On a team with two quarterbacks ranked in the Front Row’s top-50, the biggest throw in a 21-0 victory at Clovis West came out of the hand of running back Kyle Jacklich. His option pass to Justin Traina inside the 5-yard line set up the Raiders’ first score. Next: at De La Salle (1-0).

3. (4) Oakdale (1-0): The Mustangs move up the large-school poll after throttling ancient rival Sonora, 49-0. The Wing-T remains potent with Zeke Saffar, Anthony Martinez and Oscar Ramos coming out of the backfield, and Caleb Kuppens and Carson Frazee anchor a fast- attack-minded defense. Next: vs. Archbishop Mitty (0-0), Saturday, at Saint Francis (Mountain View).

4. (3) Turlock (0-1): Senior quarterback Jonah Kosakiewicz went throw-for-throw with one of the top arms in the Bay Area, and nearly led the Bulldogs to a road victory. Kosakiewicz threw of 313 yards and two touchdowns, but the Bulldogs couldn’t overcome five turnovers in the 42-35 loss. Next: vs. Reno (0-0).

5. (6) Downey (1-0): The Knights will continue to rotate quarterbacks Bryce Gouker and Beau Green for one reason only: They haven’t given coach Jeremy Plaa any reason not to. The two combined for 314 passing yards and six total touchdowns in a victory over East Union. Next: at Manteca (1-0).

7. (8) Merced (1-0): Dhameer Warren and the Bears delivered a stunning upset of Del Campo, a top-100 team in the MaxPreps computer rankings. Merced blew open the game just before the half, erupting for 22 points in the second quarter. Next: vs. Gregori (0-1).

8. (9) Pitman (1-0): The Pride found the end zone of offense and defense, delighting a raucous home crowd in a 55-7 victory over Napa. Payton Bass and Marcus Garza each scored two touchdowns, while Joseph Vasquez has a pick-6. Next: at Lincoln (0-1).

9. (10.) Patterson (1-0): Jordan Imada, Nate Garcia and the Tigers put on a show at the Grape Bowl, stomping Tokay in their opener. Imada, only a sophomore, rushed for 193 yards and three TDs, Garcia scored two rushing touchdowns of his own, and Patterson allowed just 12 points. Next: at Capital Christian (1-0).

10. (5) Gregori (0-1): Week 0’s biggest conundrum was Gregori, which averaged nearly 37 points per game last fall. Where did the offense go? The Jaguars have all the tools to be explosive, but the offense couldn’t get going against Buhach Colony. Next: at Merced (1-0).