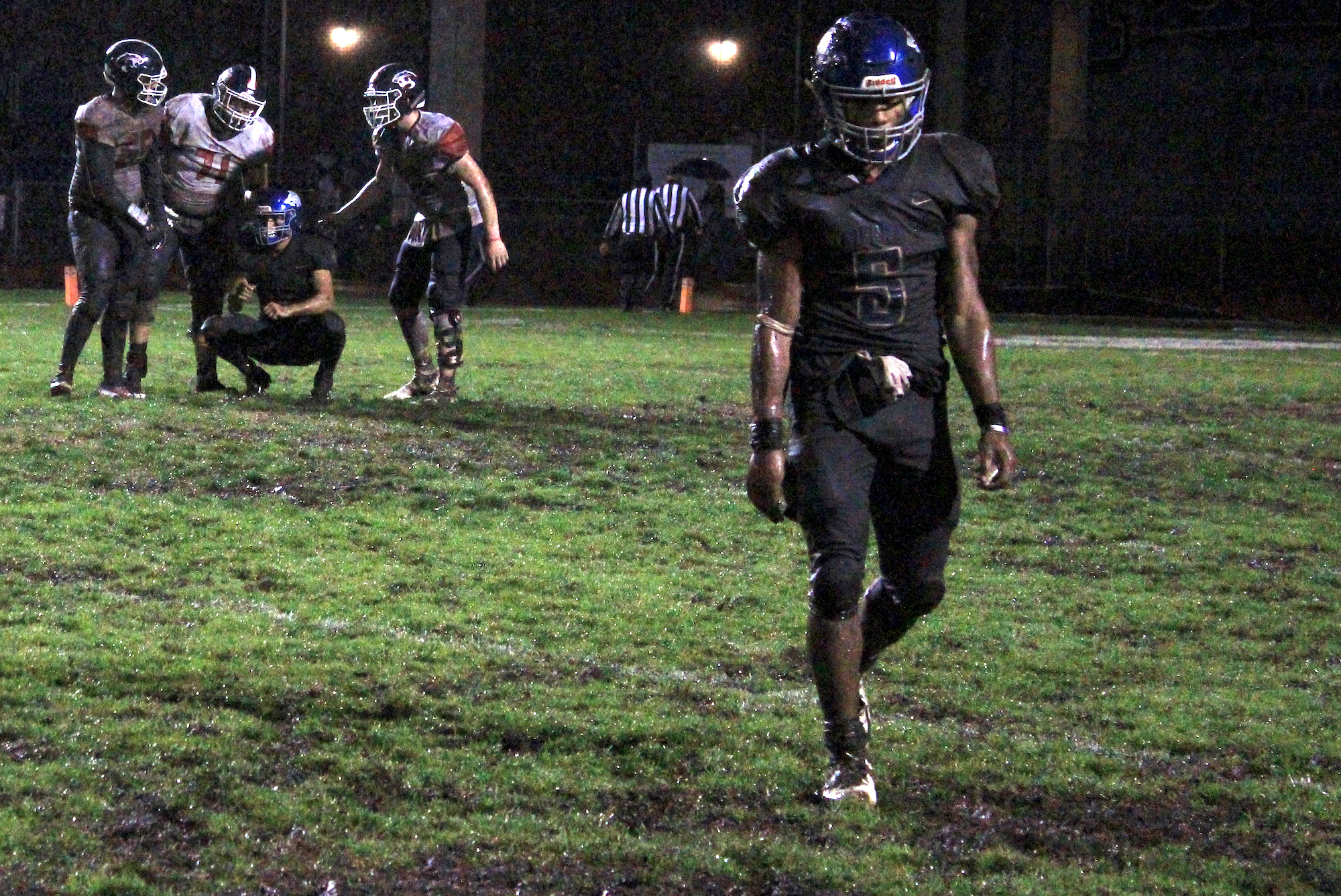 Sierra High running back Kimoni Stanley walks off the field following the final play of a 10-0 loss to Rancho Cotate in the CIF State Northern California Division 3-A Regional Bowl on Saturday, Dec. 7, 2019. (Samantha Schmidt)

Shane Johnson fell into his uncle’s shoulder at midfield, and together the leaders of the Sierra High football program shared a long embrace.

An evening full of promise and hope had been washed away by a heavy storm, and the Timberwolves’ tears struggled to find refuge among the raindrops. Players dropped to their knees, clenched fists and begged off well-wishers.

Rancho Cotate escaped Daniel Teicheira Memorial Stadium with a 10-0 victory on a wet and wild Friday evening, clinching a berth in next week's CIF State Division 3-A championship.

The Timberwolves can point to five turnovers, including fumbles on three consecutive drives and an interception on the first play of the fourth quarter, but they won’t. Coach Chris Johnson, clutching the runner-up plaque and his nephew, encouraged his players to hold their heads high and focus on 2019's journey -- not the finish line.

“It’s not the winning or the losing that counts. The joy of winning and the pain of losing, all of that stuff is going to fade away,” coach Johnson said. “It’s the relationships that you build along the way, that’s the stuff that’s going to last forever. When they’re grown men and they see each other in the hardware store, they’re going to be like, 'Dude remember this and remember that?' Those are the things that last forever.”

This regional bowl was contested mostly between the 30-yard lines, and the run-first teams turned the natural surface at Daniel Teicheira Memorial Stadium into a mud bog. Early on, success was measured by clean possessions, not touchdowns.

Sierra thought it took a 7-0 lead in the second quarter on a fumble return by linebacker Matt Dunham. Rancho Cotate quarterback Jared Stocker flipped a pass into the flat for Rasheed Rankin, who couldn’t squeeze the wobbly, wet ball. The pass appeared to travel backwards, but the officials ruled it incomplete as Dunham, a quick-twitch versatile talent, waltzed into the end zone.

“That’s whatever,” coach Johnson said. “We’re not going to worry about that stuff. They saw what they saw.”

Unfazed, Stocker and the Cougars' offense finally found traction. Rancho Cotate notched the game’s first first down with 5:58 left in the second quarter and punctuated the drive with a 37-yard field goal by Alex Sandoval with under 10 seconds left.

Considering the conditions, it was a daring play call. Holder Jordan Broderick handled a high snap, setting the ball just as Sandoval planted and began his leg swing.

The Cougars stretched the lead on a 2-yard run by Stocker, who followed his linemen into the end zone to make it 10-0 with 3:16 left in the third quarter. The drive was highlighted by a spinning, diving 38-yard scamper by Rankin, a 6-foot-1, 225-pound running back seemingly built for these conditions.

“It could have gone our way or it could have gone their way,” coach Johnson said of the rain, which began about an hour before kickoff and dumped relentlessly for nearly three hours. “... It took a lot of our speed out of the equation. I felt like they were bigger and stronger. We had the advantage in speed, but on a field like this it comes down to who has the plow horse -- and they did.”

Sierra has a big back of its own. It just took him awhile to get going.

Kimoni Stanley, who entered the game with an area-best 2,024 yards, finally found a seam midway through the third quarter. Trailing 3-0, Stanley burst up the home sideline 58 yards to the Rancho Cotate 5, but the weather -- playing no favorites -- thundered back.

On the ensuing play, Sierra mishandled the snap and the ball was recovered by the Cougars, who forced five turnovers.

Still, Sierra had its chances. Long runs by quarterback Shane Johnson and Stanley moved the ball to the 13-yard line, but a series of blunders -- an unsportsmanlike penalty five yards out of bounds and a false start -- forced the Timberwolves to settle for a field goal.

The 31-yard attempt was short.

Despite playing all of its home games on turf, Rancho Cotate embraced the slop. The Cougars prepared for a mud bowl with the Timberwolves by conducting all of its practices in a city park that was a sloppy mess.

"We didn't have the rain that we had tonight, but E Park was just as muddy as this," Rancho Cotate coach Gehrig Hotaling said, pointing to a spot at the 25-yard line at Daniel Teicheira Memorial Stadium that resembled quick sand.