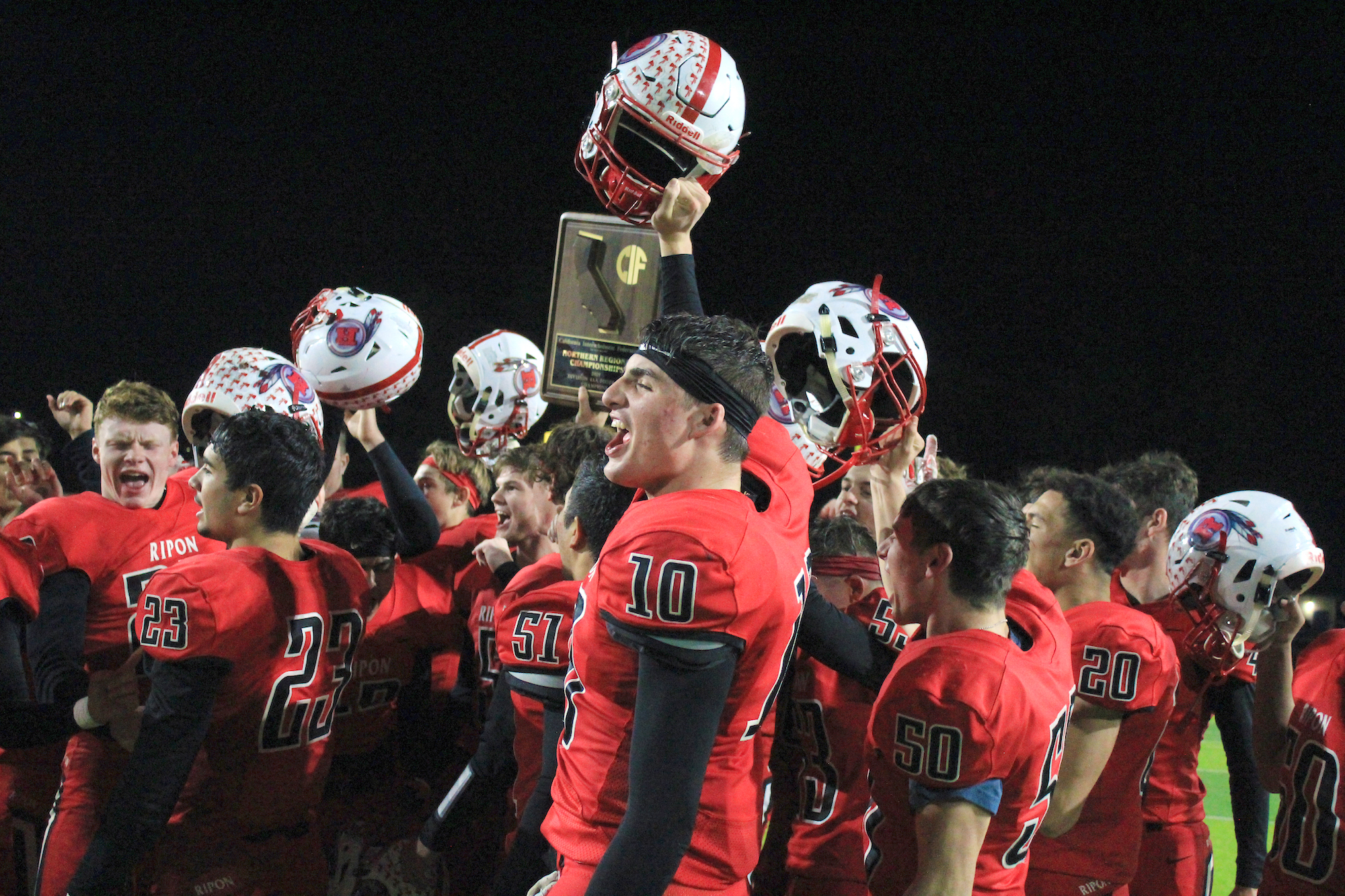 On Friday, despite facing a team with 60 players on the roster and a rich postseason resume, the numbers finally favored Ripon.

Consider this: The Indians limited Sutter, a Division III champion from the Northern Section, to just eight offensive plays in the second half, including none in the fourth quarter en route to a commanding 31-14 victory in the CIF Northern California Division 4-AA Regional Bowl.

The Indians (13-1) hunt their first state championship. Ripon will play Highland of Palmdale in next week’s final. Highland beat Selma, 42-29.

“I can’t even put words to it at this point,” said Ripon coach Chris Musseman, who stepped aside during the postgame ceremony to allow senior quarterback Nico Illardi to accept the winner’s plaque.

“As physically beat up as we are; the numbers are low and I look across and they’ve 60 guys on the sideline and they’re platooning on both sides of the ball. Our kids are just tough and they play hard.”

Ripon reached its first state bowl by executing football’s full-proof plan. Ilardi engineered two eight-minute scoring drives in the first and fourth quarters and Nathan Valdez booted a 33-yard field goal as time expired in the first half to give the Indians a 10-point advantage.

“Our offense was our best defense tonight,” Musseman said, “even though when our defense was on the field, they kicked butt. They shut those guys down. But being able to keep them off the field was huge.”

Ilardi said it was “demoralizing.” While Sutter’s defense labored on the field, the offense, including 1,600-yard running back Cory McIntyre, remained on the sideline.

Though Sutter, a six-time regional finalist, entered the game the more experienced program, Ripon looked comfortable in its debut on the regional stage.

The Indians forced a three-and-out on the opening possession and then surged ahead 7-0 on a 1-yard run by Grant Wiebe.

Colton Dillabo tied the game at 7-6 with 6:39 left in the first half. Dillabo stepped through traffic on the visitor’s sideline for a 22-yard touchdown. That was Sutter’s lone offensive highlight on a clear evening that demanded stars.

The Huskies touched the ball just once in the fourth quarter -- a fumble on a surprise onside kick with less than four minutes left.

Ilardi put his stamp on the game with 10 points in the final minutes of the first half. He floated a perfect pass down the middle of the field for Brandon Rainer, who split two defenders for a 56-yard touchdown reception.

Moments later, Ilardi, a three-sport athlete whose postseason has thrust himself into the Player of the Year conversation, raced the Indians down the field. A pass interference flag moved the ball to the Sutter 21, setting up a chip-shot field goal by Valdez.

Ilardi was 9 of 13 for 121 yards in the first half, extending drives with clutch fourth-down throws and gutsy runs.

“What can you say about that kid?” Musseman said. “It’s such a pleasure … He’s just bringing us right down the field. To have a kid like that is a once-in-a-lifetime deal.”

Ripon extended its lead on the opening drive of the second half. Ilardi stepped into the end zone untouched, punctuating a drive highlighted by Danny Hernandez’s 56-yard thunderbolt. Hernandez (25 carries, 155 yards) later capped the scoring with a 3-yard run with 3:53 left in the game.

“We talked about that at halftime in the locker room. We said we’ve got to drive this thing down and put it in the end zone,” Musseman said, “and if we do, it’s going to take their spirits.”