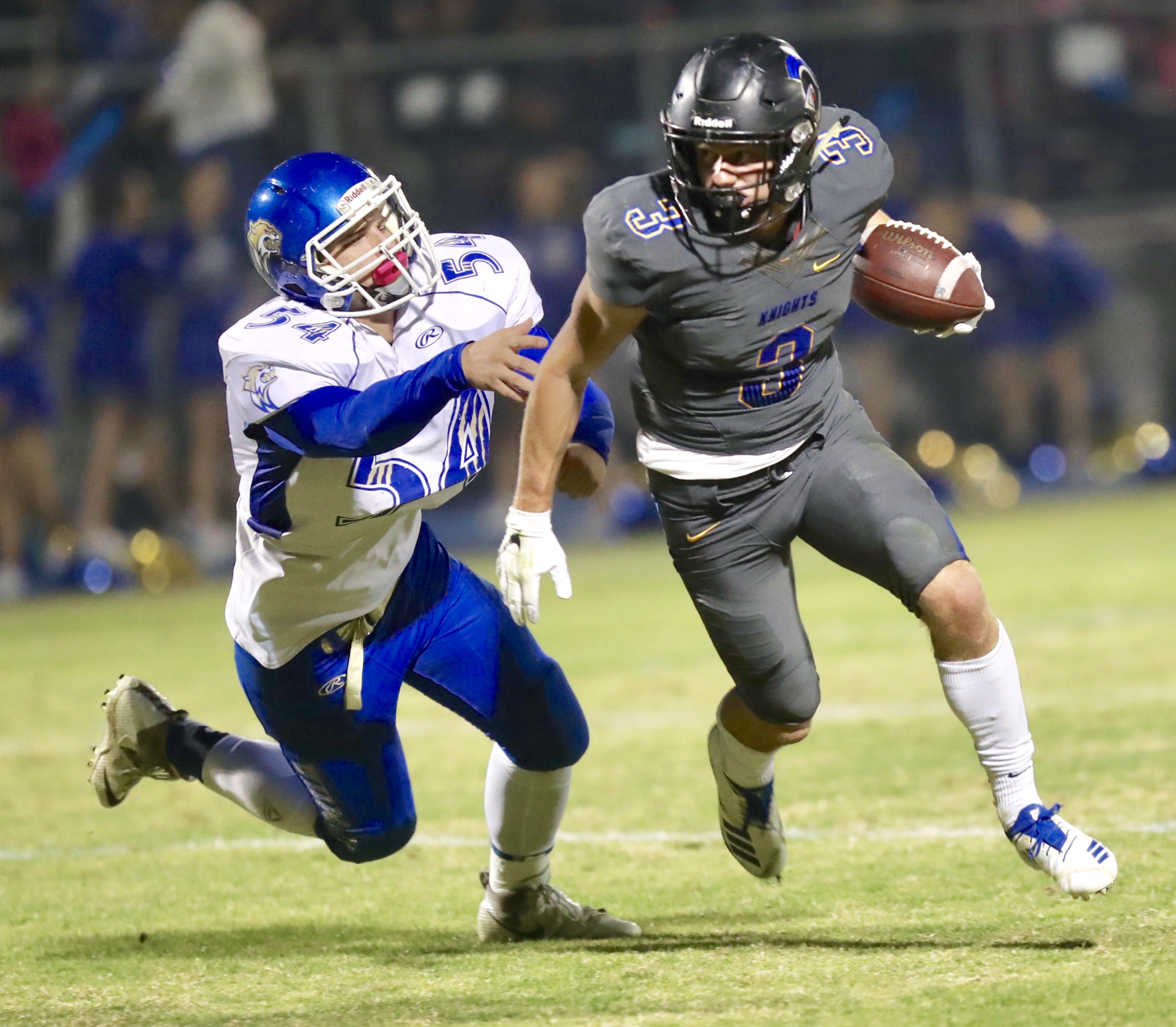 Ripon Christian running back Michael Kamps had two rushing touchdowns and a sack in the first half of a victory over Waterford on Friday, Nov. 9, 2018, in the second round of the Sac-Joaquin Section Division VI playoffs. (Wayne Thallander)

RIPON — For most of the night, Ripon Christian defensive coordinator Eddie Erdelatz stood off to the side, away from the commotion and crowd.

With his reading glasses pushed to the edge of his nose and his call sheet in hand, Erdelatz carefully crafted another shut-down defensive performance in the Knights’ 28-0 victory over quarterback Michael Vivo and No. 12 Waterford in the second round of the Sac-Joaquin Section Division VI playoffs.

Fourth-seeded Ripon Christian has shut out its last three opponents and hasn't yielded a point since the fourth quarter of a 49-7 victory over Mariposa on Oct. 12. That's nearly a month ... and counting.

“We pride ourselves on hard-nosed defense,” said Michael Kamps, who had four tackles and four touchdowns.

“Coach Eddie puts in an amazing plan for us. The focus was on Vivo. Respect to Vivo, he’s an amazing player. We knew that was what we needed to do — stop him to win this game. I feel like we did a good job of that.”

The game, chippy at times, was called with 8:27 left in the fourth quarter following a skirmish between playes near the Waterford sideline. Officials decided to end the game between the bitter Southern League foes early after meeting with the schools’ athletic directors on the field.

The Knights (11-0) travel to Trans-Valley League co-champion Modesto Christian (10-1) next week for an opportunity to return to their second straight section final. The Crusaders defeated Argonaut on Friday, 28-7.

“It’s kind of bittersweet to win this way,” offensive coordinator Randy Fasani said, “but you know what, we’ve been looking forward to moving on in Division VI. We look forward to playing against bigger schools.”

Ripon Christian stymied one of the southern section’s top offensive threats in Vivo, a dual-threat quarterback who accounted for seven touchdowns in an improbable come-from-behind victory in the first round. Waterford trailed defending section champion Rio Vista 44-20 with 5:29 left in the game, but scored 31 unanswered points in one of the biggest playoff upset in recent memory.

Vivo had his hand in all of the touchdowns, rushing the ball a career-high 24 times and throwing one TD pass as he was falling backwards to the turf. He wasn’t nearly as prolific on Friday in a rematch with Southern League champion Ripon Christian.

The Knights set the tone with a lock-down defense, which has allowed just 58 points in 11 games. Kamps scored his first touchdown shortly after a chase-down sack of Vivo in the first quarter, and then made it 14-0 following an interception by Sean McGovern. Slow to start, the offense found its footing thanks to short fields created by the defense.

“The offense feeds off of the defense,” Kamps said. “It’s encouraging when you know your defense is stout and you don’t have to worry about a long field and you know you can turnover at any moment. It’s really nice.”

The section’s top defense, based on fewest points allowed, registered two interceptions and three sacks. McGovern led the way with nine tackles. Drew Van Vliet had eight stops and a sack, while Wyatt Van Vliet had six tackles and an interception. Leading 14-0, the defense made a red-zone stand on the final possession of the first half, which helped change the scope of the game.

“Defensively, stopping them in the red zone ruined their motivation and slowed them down," McGovern said.

Kamps finished with 158 yards on 20 carries and proved to be the Knights’ closer in the red zone. Three of his four touchdowns came on runs inside the 10-yard line. The other was an 11-yard trot to make it 14-0.