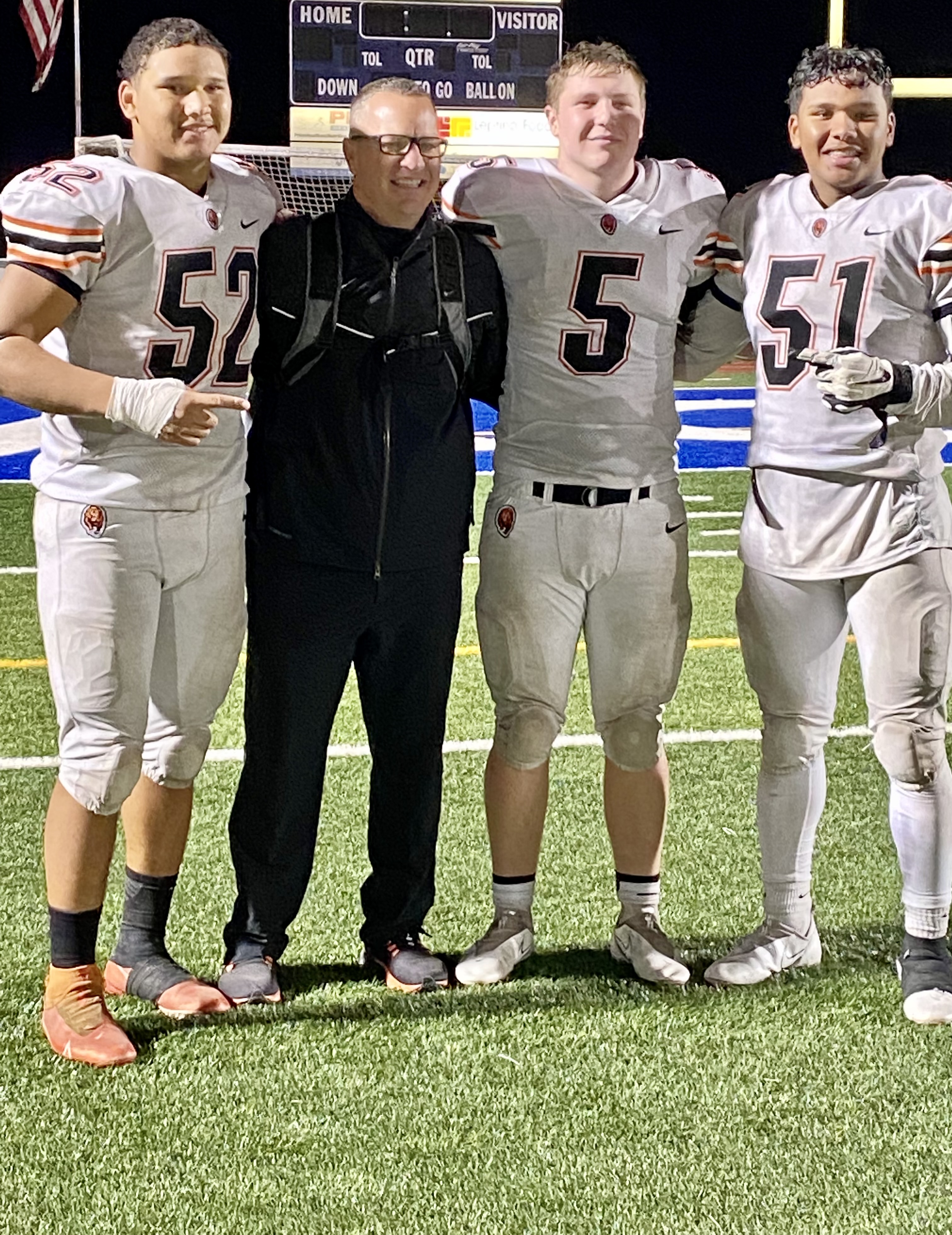 Rob Scheidt poses with his son, quarterback Seth Scheidt (5), and the Booth brothers, Jalonn (52) and Jaylen (51), following Merced's 51-50 victory over top-seeded Kimball in the semifinal round of the Sac-Joaquin Section Division IV playoffs.

'We had the right play': The psychology behind Merced's gutsy two-point try

On the eve of his first Sac-Joaquin Section finals appearance in 15 years, with all the focus on what’s to come next for his Merced High Bears, Rob Scheidt can’t help but think about his last trip to a championship game. If only for a moment.

In 2006, Merced, in its menacing black and orange uniforms, was loaded with next-level talent, galvanized by a coaching staff that was as fresh and dynamic as the roster it created. The Bears opened their season with a statement win over Los Angeles Crenshaw and then rolled St. Mary’s, Franklin and West of Tracy in the postseason to reach the Division I final against unbeaten Vacaville.

On a soft and slow track at the University of the Pacific, Merced pulled within one in the waning moments on a touchdown pass from Logan Todd to twin brother Carter Todd. Scheidt rolled the dice and signaled for the two-point conversion. He hoped the Bears' first section title since 1990 waited for them on the other end.

The play never materialized, a sequence that haunts Scheidt.

“We’ve always felt like our 2006 team, nothing against Vacaville, we always felt a little disappointed they didn’t get a chance to get a banner or a ring,” he said. “Not that you dwell on it. My relationship with those kids means more than the game. We just wish they would have had it.”

Fifteen years later, Scheidt got a second chance at glory thanks to another gutsy two-point conversion call in the final seconds.

Merced, the Central California Conference runners-up, extended its season with a stunning come-from-behind victory at top-seeded Kimball. The Bears quieted one of the nation’s leading passers, Nicholas Coronado, and outgained and out-possessed the Jaguars on their own turf.

Still, they found themselves in a 34-20 hole at the half. Cue the comeback. The Bears erased the two-score deficit and pulled within one, 50-49, with three seconds left. Just as he did 15 years ago in the biggest game of his coaching career, Scheidt didn’t hesitate.

He signaled for two and inserted lineman Jaylen Thao-Booth as an eligible receiver. The rest, as they say, is history. Quarterback Seth Scheidt cleared the left side of the field by sending the slot receiver into motion. Thao-Booth paused for just a moment at the snap and then leaked into the flat, a defensive back in tow. Scheidt’s pass wasn’t perfect, but he was obstructed by a 6-foot-5 defensive end, Chinedu Nwankwo.

Thao-Booth, who projected as a wide receiver-linebacker over the summer, showed his hands and speed. He clutched the football, stepped past the defensive back and into the end zone. Merced, 51. Kimball, 50.

FrontRowPreps.com caught up with coach Scheidt to discuss the play call, the player, and Saturday’s big game.

Burns: Before you can win the game with a two-point conversion, you’ve got to put yourself in position to first win the game. At one point, your team trailed by two scores and things looked bleak.

Scheidt: We weren’t playing that badly, but special teams were killing us. If you look at the stat line after the game, we dominated time of possession and we had twice as many yards as they did.

Burns: Was the plan to always go for two in that end-of-the-game situation?

Scheidt: I’ll be honest with you, at about 16 seconds, we were going to kick it. We were not going for two. The idea was to get into overtime. We thought we had some good things going on defense, but I flipped over.

Much like in 2006, I asked the defense, and they said, “Let’s go for two.” It wasn’t like they didn’t think they could stop them. We just had the right play.

There was a debate earlier to run it earlier to score a touchdown. We thought that wasn’t a good idea. If we’re going to score (on the final drive), then let’s use this play. And that’s what we did. Everyone was on board when we got to three seconds to play in the game.

Burns: What gave you the confidence that you had the right play?

Scheidt: We got this left tackle (Thao-Booth) that is a phenomenal athlete that we know is as fast as anybody on the field. Let’s get him the ball.

Scheidt: He’s a starting guy on the basketball team. He can play the 1-5 on the basketball team because of his athleticism. We wanted to look at him at linebacker and inside wide receiver during summer 7-on-7s, but it never worked out. We know what he can do. We watch him run around, run 40s and do all of this stuff. It’s rare to have a guy like that. You see that play with a rumbly-tumbly guy, and sometimes it works and sometimes it doesn’t, but we had faith he’d put it in the end zone.

Burns: It was the right play and the right athlete, but it didn’t have Kimball completely fooled.

Scheidt: I didn’t know (the defensive back) didn’t go all the way (with the receiver in motion). The other issue: They got a 6-foot-5 defensive end coming off the edge. Fortunately, Seth jumps and throws over the top of him. In some pictures, it looks like it barely goes over his hands. So many things could have gone wrong and they didn’t. … We’ll be talking about that play for a long time, and rightfully so.

Burns: You’ve had a great career at Merced High. What’s it mean to you to finally be back in this game?

Scheidt: It’s a dream to be here. I’ve got great friends in Frank Marques (Hilmar), Roger Canepa (Central Catholic) and Trent Merzon (Oakdale). They’re awesome dudes and they’re there all the time. This isn’t an easy deal. I feel like our program is historically a great program and it’s been a goal for me to get here and win. I’d love for it to happen.”