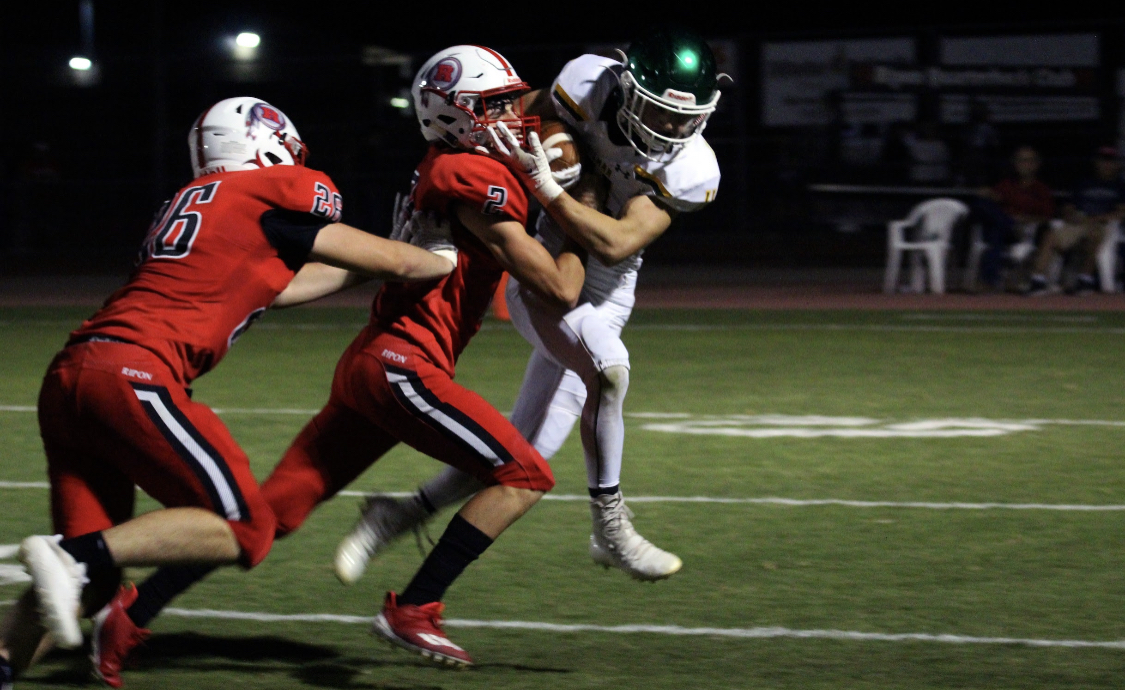 'We just had to smack them': Indians stifle small-school No. 1 Hilmar

RIPON — Chris Musseman believes the Trans-Valley League is as balanced as it has been in years.

“There are five teams that can win this league,” Musseman said. “I told the team before the game tonight, ‘Whoever wins the TVL is probably not going to be undefeated.’ It's that kind of league this year.”

They’re all chasing the Indians.

Caleb Johnston scored the eventual game-winning touchdown midway through the second quarter and the Indians rode a goal-line stand at the end of the first half to take the early pole position in the toughest small-school conference in Northern California.

Hilmar fell from the ranks of the unbeaten with a stunningly flat offensive performance. Ripon bottled up the run, forced two turnovers, won the battle of field position, and even blocked a field goal in the third quarter.

“Going against the best team in the TVL right now, we just had to smack them and show them what Ripon football is all about,” said Day, a bend-but-don't-break two-way warrior for the Indians.

The game was decided on the defensive side of the ball, where the Indians finished a masterpiece despite rotating players with cramps and fatigue in the second half.

Day and Leovanni Ochoa teamed to deliver the play of the game — a goal line stand as time expired in the first half. Day and Ochoa blew up the middle, bending off blocks to stuff Hilmar at the goal line and preserve a 7-3 cushion.

“That was the game right there. That was the difference in the game,” Musseman said. “If Hilmar scores there, I don’t know that we can hold on. Our attitude in the locker room was the best I’ve seen in years. These guys were feeling it; they wanted to get right back out there.”

Hilmar coach Frank Marques tipped his cap to his opponent. He can't say that he's altogether surprised by Friday's result. His team, a big-game hunter to start the. season, has been playing with fire the last few weeks.

For the third straight week, Hilmar battled from behind. The Yellowjackets trailed by 14 in a win over short-handed Sonora and by 10 in the final minutes against upstart Livingston, but their luck ran out at Stouffer Field.

"We should have punched it in there," Marques said of the final possession of the first half. "If we score there, it's a whole different ball game (and) they're scrambling to score points. ... You have to give them credit for playing the game. We just didn't play very well. The last two weeks we've been struggling."

Adam Berrera, a senior transfer from Sierra High, stripped Luis Vargas after Vargas made a difficult catch in the flat. Nolan Young created the second turnover, jumping a route down the sideline to pick off Cameron Moak with 8:17 remaining.

The Indians needed just one score -- a 1-yard burst by Johnston to cap a 9-minute drive that spanned the first and second quarters. Johnston pushed the ball over the goal line just as he was wrapped up by a swarm of ‘Jackets.

“Everybody doubted us coming in,” Young said, “and we knew we wanted to win. We came out on top and fought through it."