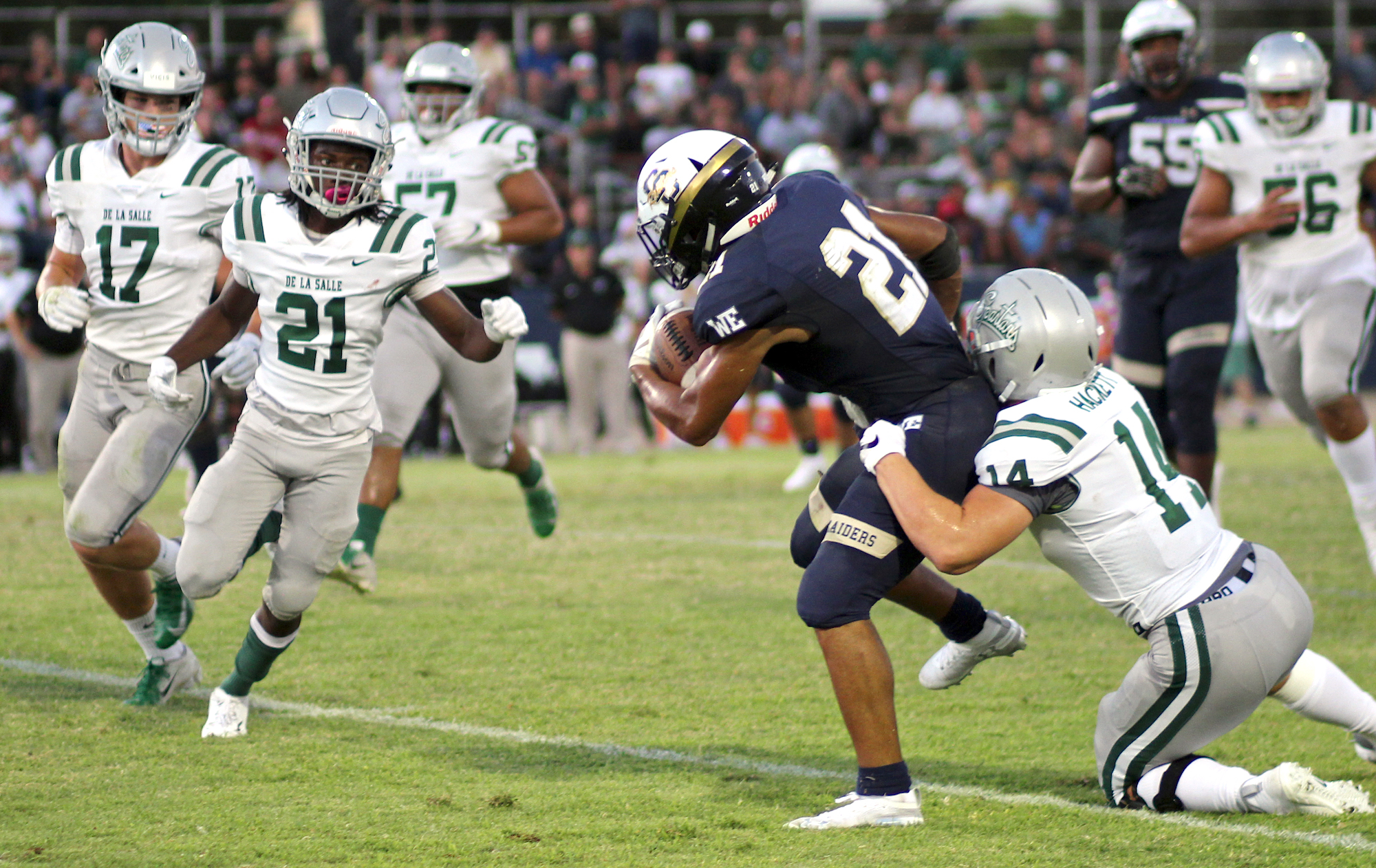 Central Catholic running back Minaya Olivo is wrapped up by a De La Salle defender during a 49-14 loss to the national power on Aug. 30, 2019, at Central Catholic High School. (Samantha Schmidt)

'We knew they were thin.' De La Salle wears down Central Catholic.

Scowling and quickly sliding toward an 0-2 start, Central Catholic football coach Roger Canepa stepped toward the numbers and took inventory of his huddle.

“Who do we got?” Canepa asked rhetorically, his sideline sprinkled with players out of pads and on the mend.

Of course, he knew the answer: Not much.

Still wounded from a last-second season-opening loss to Clovis West, the Raiders were run ragged by one of the premier football programs in the nation. De La Salle scored on four consecutive possessions in the second quarter en route to a commanding 49-14 victory.

The loss leaves the large-school No. 2 Raiders 0-2 for the first time since 2010, and with trip Stockton for the Holy Bowl and Upland of Los Angeles on the horizon, an 0-4 start has become a distinct possibility for the four-time state champion.

“I’m not happy we lost. We fought. The first quarter was 7-0 and we had two penalties,” Canepa said. “We played hard. We just got to get healthy. We can’t catch our breath. We have one backup and each position. When you play one of the best teams around, you just get wore out.”

Despite Central Catholic’s injury concerns, the matchup remained one of the most anticipated games in regional history, largely because of the Spartans (1-1), a perennial CIF State Open Division champion. De La Salle hadn’t voyaged into the Central Valley since 1980, when it throttled Ceres by 33 points.

A packed house arrived early for the clash of parochial powers. Fans lined the south end zone and filled the home stands during the junior varsity game. As Canepa surveyed the scene before the varsity kickoff, he noted that the Raiders’ senior stars -- quarterback Dalton Durossette, running back Minaya Olivo and wide receiver Sithri Price, among others -- would have to make big play after big play.

They did. It still wasn’t enough to knock De La Salle off track.

Price showed his ability to pick up yards after the catch. He had two catches for 54 yards in the first half, including a 41-yard reception in which he spun out of two tackles near the sideline. He later added a 49-yard touchdown reception in the third quarter.

Olivo (31-yard touchdown) slashed his way for 64 yards on 12 carries in the first half, but his impact early was felt mostly on the defensive side of the ball. He flew to the ball in the first quarter as Central Catholic gave a standing-room only crowd reason to believe.

The Raiders surrendered a 6-yard touchdown by Shamar Garrett on the Spartans’ opening possession, but forced De La Salle to punt on its next offensive trip as the first quarter ended 7-0.

After that, though, De La Salle had its way … without showcasing its vaunted Veer offense.

The Spartans attacked Central Catholic through the air. Quarterback Dorian Hale threw the ball 21 times in the first half, completing 12 passes for 169 yards. With plenty of time in the pocket, the left-handed Hale pushed the ball past the sticks.

Nine of his completions were for more 10 yards or more. By comparison, Hale threw just nine passes all game in a 24-14 loss to national No. 1 St. Thomas Aquinas in the season opener.

“We knew they were a little thin,” De La Salle coach Justin Alumbaugh said. “We can’t take them lightly, though, and we didn’t.”

Garrett, Hale, James Coby and Nico Torrez scored rushing TDs in the second quarter as the Spartans, ranked fifth in California and 16th in the nation, according to MaxPreps, charged into the intermission ahead 35-0.

Canepa found the silver lining in the loss -- and the schedule ahead. As long as the Raiders can get healthy, they’ll be better prepared for the rigors of the Valley Oak League season and Sac-Joaquin Section Division II playoffs.

“We threw the ball well, we executed (and) we ran better. We put bodies on bodies and played better ‘D.’ We’ll get better,” Canepa said. “It was a better effort, but it’s not where it needs to be. I gauge everything week to week. Next week we get a little better, we’re going to get a win.”

The Raiders expect the return of versatile talent Kyle Jackson, who left the loss to Clovis West with a knee injury. Jackson gives Central Catholic depth at quarterback, tight end and safety.

“As long as we stay healthy and tough, it’s going to pay off in the long run,” Canepa said. “You saw it, at times we looked good. We get a couple guys back … and then we start clicking and we get a little more depth. Overall we got beat, but hey, it was fun."