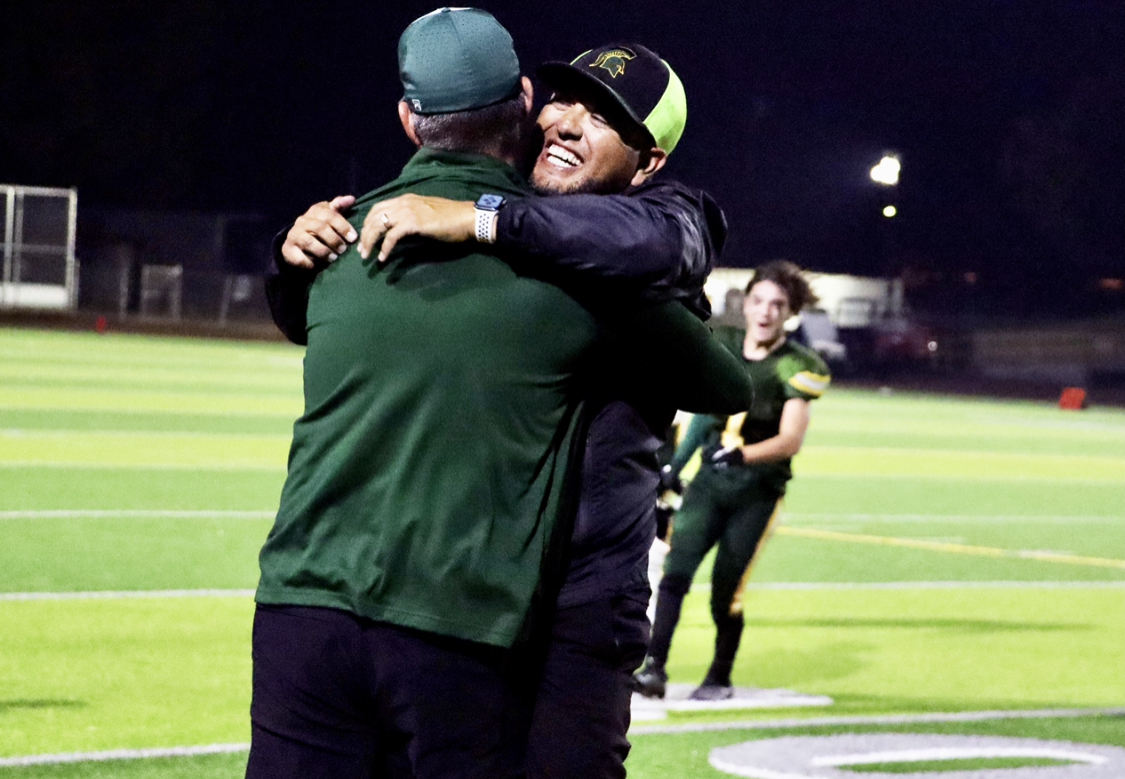 In his eighth season as head coach at alma mater, Tim Garcia captured his first outright league championship with a 33-24 victory over Ceres, completing a 10-0 regular season. (Samantha Schmidt)

Garcia’s Spartans finished it, a 10-0 season, clinched Thursday night with a convincing 33-24 victory over Ceres. They annexed an outright Western Athletic Conference championship, their first football title in 20 years, with a run of the table not seen at Davis since Lanphear’s Spartans in 1984.

The Spartans celebrated near the Chuck Hughes Stadium scoreboard that still beamed the final score. They hugged, posed for photos and soaked in a moment that took Garcia and his staff eight long years to build.

“What an amazing journey,” Garcia said. “This was the ultimate goal to provide the Davis community…something to be proud of again.”

Davis will prepare for the Sac-Joaquin Section Division III playoffs, and the brackets will be announced Sunday. Until then, Garcia wants his team to savor long-sought success.

The Spartans earned it the old-fashioned way. They turned three Ceres turnovers into 13 points, parlayed strong special-teams play into game-long momentum, and added a big dose of running back Isaac Martinez, who carried 26 times for 192 yards and Davis’ first touchdown.

“I was very nervous and very excited at the same time,” said Martinez, a three-year varsity standout. “We made history. It means the world.”

Munthe’s availability for the playoffs is uncertain. He missed most of the first half and, after his touchdowns, was carried off the field by teammates. The extent of his knee injury won’t be known for a few days.

Ceres (5-5, 3-4) did not submit quietly even after trailing 33-12. Kahmi Smith powered for a 12-yard score – his second TD on the same rollout counter – and Landyn Hudson passed 16 yards over the middle to Ricky Stanley to draw the Bulldogs closer.

Davis will enter the postseason with a positive vibe based on across-the-board success. One example was Elijah Shoates’ stripping of the ball from Ceres punt returner Eli Beltran to set up a second-quarter field goal. Garcia thought his special teams were the difference.

Two weeks ago, he walked his team into the Davis gym and pointed to the wall where the WAC title banner will hang.

Then his team made good on that vision.