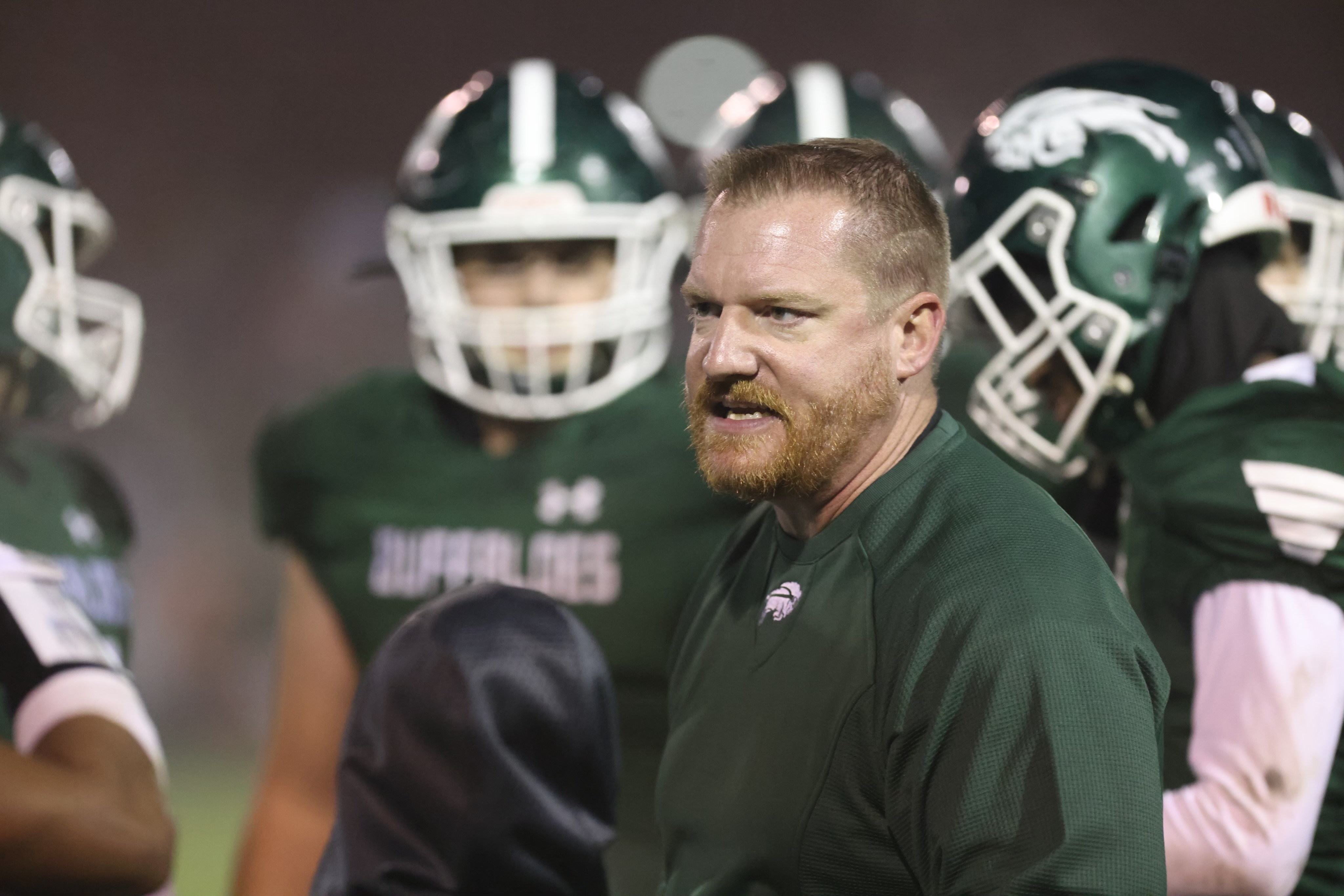 At full strength for the first time in weeks, Manteca coach Mark Varnum watched as his high-powered offense roared back to life in a rout of Sacramento. (Wayne Thallander)

The Valley Oak League, a punishing gauntlet for its top-tier teams over the years, becomes a good friend come Sac-Joaquin Section playoffs time.

It’s a good friend because it prepares its teams, in a way few other conferences do, for the rigors of the postseason.

“We want to win now and we always want to be playing on Thanksgiving and beyond,” Manteca head coach Mark Varnum said Wednesday. “The VOL prepares us for that.”

Manteca (8-3), seeded third going into its Division III semifinal assignment Friday night at Lincoln of Lincoln, is the best example of the VOL at its best. The Buffaloes’ last outright VOL title was 2013 yet, since then – they’ve shared two three-way titles – they’ve taken home four section-championship banners.

They know first-hand about the VOL and the respect its best teams have earned. The Buffaloes finished the regular season with consecutive losses to champion Central Catholic, runner-up Kimball and third-place Oakdale. But they still picked up a first-round bye and affirmed it by crushing Sacramento 54-14.

Junior Blake Nichelson, one of the section’s most exciting difference-makers, has recovered from a late-season ankle injury. His return makes Manteca a major threat. He’s totaled 35 touchdowns and 1,555 rushing yards and, after sitting out on defense last week, again will be a two-way weapon Friday night.

“He was about 85 percent last week and he’s better now,” Varnum said. “We’re going to feed that kid the ball.”

The Buffaloes face a Lincoln team (8-2) that swept to the Foothill Valley League title and won its first playoff game in 12 years. A tackle-breaking 75-yard pick-six by league MVP Jordan Wagner with two minutes to go was the margin in the Fighting Zebras’ 28-21 victory over Christian Brothers last week.

“They’re saying this might be Lincoln’s best-ever team,” Varnum said. “It’s going to be a challenge for us.”

Meanwhile, top-seeded Oakdale (8-2) believes it’s also on the rebound.  Since the Mustangs’ back-to-back losses to Kimball and Central Catholic, they haven’t allowed a single point in four games. The 40-0 rout of Roseville last week signals an Oakdale team – with its own blue banners hanging from the gym walls – ready for Friday night’s semifinal at home against Patterson.

Oakdale juggled personnel on defense and, among other changes, relocated its best tacklers closer to the line of scrimmage. Kevin Camelin has emerged as arguably the team’s best all-around player, which covers for the season-ending loss of top rusher Yahir Ayala (knee). Three-year varsity quarterback Jackson Holt further solidifies the Mustangs.

“Any time you win a playoff game, you’re super excited,” Oakdale coach Trent Merzon said. “We’ve shuffled the deck on defense and are playing good football right now.”
Patterson (10-2), the No. 5 seed and the Central California Conference champion, has won 10 straight after season-opening losses to Hilmar and Manteca.

The Tigers own a win over talented Merced and, during the playoffs, rolled past Burbank but were extended to the game’s final play before beating Yuba City 52-48 last week.

“Patterson has gotten better after a rough start,” Merzon said. “They’re a different team than they were earlier in the year.”

VOL power extends up and down the section brackets. Division II top seed Central Catholic (10-1), after a close call last week against Lodi, will welcome Antelope in the semifinals. Kimball (10-1), the No. 1 seed in Division IV, features a touchdown machine in quarterback Nicholas Coronado. The Jaguars will be challenged, however, by a hot Merced team Friday night.

But at the very least, the VOL is programmed to be ready. It churns in the league’s DNA.

“You need energy, effort and luck to win. But so many things are out of your hands,” Merzon said. “Are you going to stay healthy? Will your opponents stay healthy? There are so many variables. Even looking back at it, it’s hard to tell.”

There is only one certainty – VOL teams will be involved in the process.