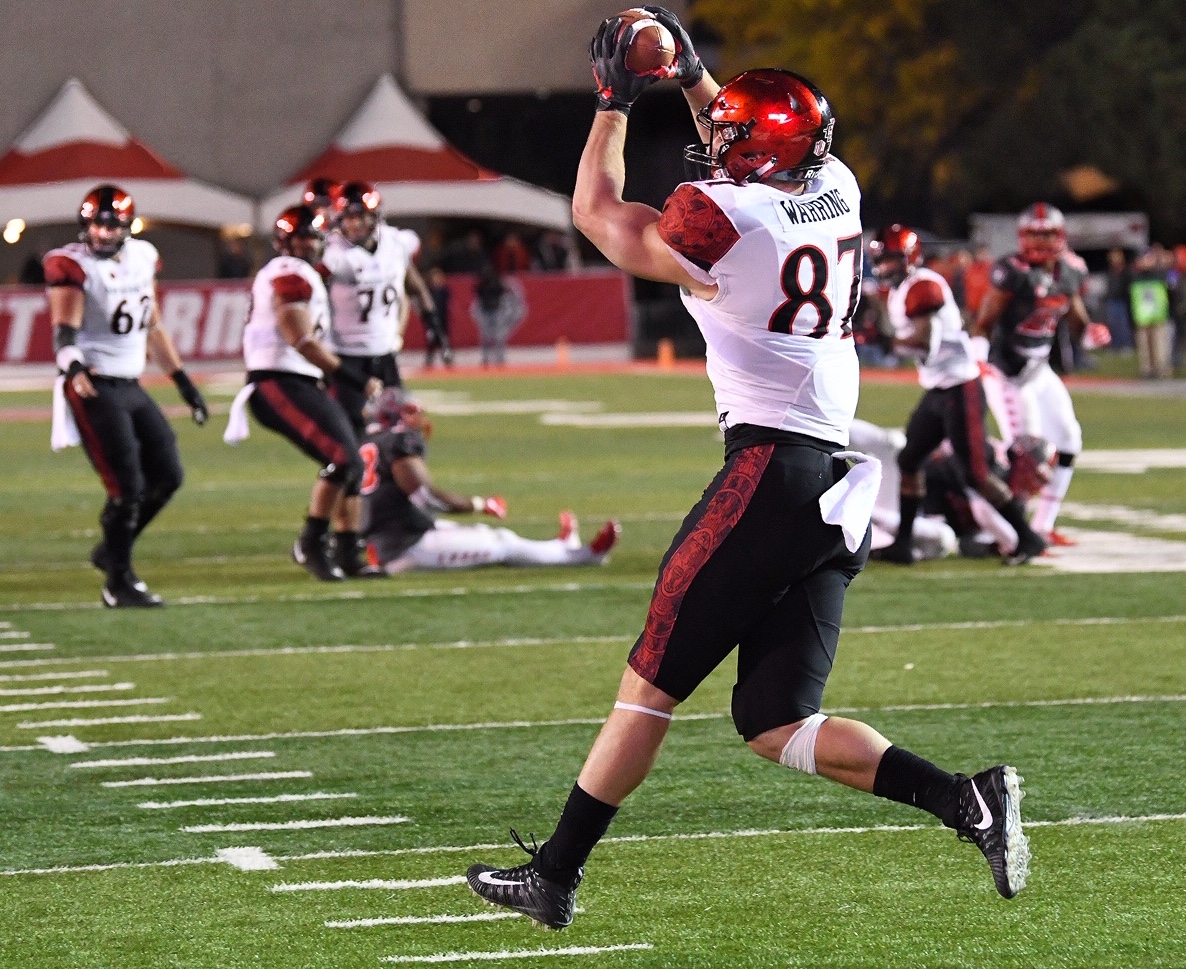 The watch party in San Diego hummed along as family, friends and teammates anxiously awaited the news.

And then it happened: Sonora High graduate Kahale Warring, the former walk-on at San Diego State, was headed for the NFL.

”I’m thrilled,” the tight end said Monday. “All I want is a playbook to start learning and earn the respect of my teammates and coaches.”

The development of Kahale Kuio Kalani Wodehouse Warring, the third-round selection (the 86th overall pick) by the Houston Texans, is remarkable. Though he didn’t play football until his senior year at Sonora, he became the fifth-highest draft pick from California last weekend.

The reason? A legit physique and a ton of athleticism. He is the area's highest draft pick since the San Francisco 49ers tabbed Colin Kaepernick (Pitman High) in the second round in 2011.

Warring honed his skills on the Sonora basketball, water polo, cross country, swimming and tennis teams. As it turned out, training all those different muscle groups prepared him for football at the highest level.

“It was huge,” Warring said. “It made me a complete athlete.”

He made his impact for the Aztecs by catching 51 passes for 637 yards and eight touchdowns over the past three seasons. It all culminated with the best possible news during the draft’s second day.

“We are so happy for him,” said Lloyd Longeway, Warring’s father and the coach of the Sonora boys basketball team the past two seasons. “He worked so hard for this.”

Warring didn't give the NFL much thought -- he still had a year of eligibility left at San Diego State -- until the people closest to him planted the idea in December. He then declared for the draft.

If his football journey wasn’t exactly conventional, his connections with the Texans went by the book.

They announced their interest in him by talking to him during the NFL Combine and also worked him out.

The Texans envision Warring, 6-foot-5 and 252 pounds, as a developmental project. His excellent speed and good hands make him a natural target for passes in the seam. The Texans also noticed his gradual improvement and his ascending potential.

DeAndre Hopkins, Houston’s top receiver, accounted for 38 percent of all Texas’ passing yards last year. The Texans, seeking help after the exit of Demaryius Thomas and the ACL rehab of Will Fuller, hope to diversity their passing attack.

The Texans, the AFC South champions a year ago, have drafted three tight ends over the past two years. They’ll be no shortage of competition in camp for Warring.

A plus for the Sonoran is Houston’s Pro Bowl quarterback Deshaun Watson. Warring even has worked out with Watson in Los Angeles, thanks to their mutual trainer, Nike’s Ryan Flaherty.

“I think he’s such an unbelievable leader,” Warring told the Houston media over the weekend. “He was at Clemson and I know that he transitioned right to the Texans right now. So I’m thrilled to get working with him.”

Not long after his name was called, Warring received a text from Watson, “Welcome to the H.”