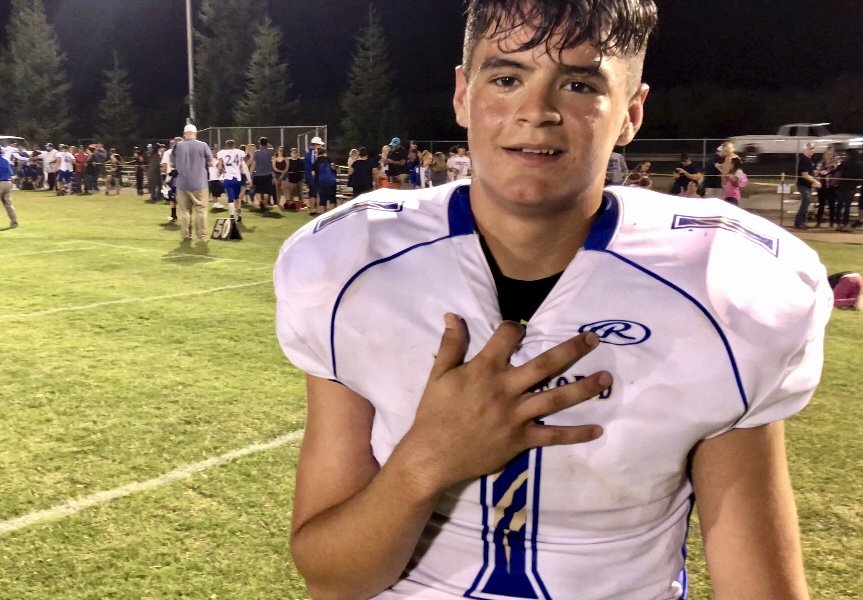 Waterford senior Ricardo Ramirez had three touchdowns and an interception in the Wildcats' 35-21 victory at Big Valley Christian on Sept. 7, 2018. (James Burns)

Ricardo Ramirez staggered toward the sideline, fighting to breath but refusing to come out of the game.

Waterford football coach Lonnie Statzer met the speed merchant near the numbers, reaching into his pocket for an inhaler. With each puff, Ramirez, the Wildcats’ starting wide receiver and defensive back, doubled over in pain, dry heaving and growling.

“He had a scary asthma attack out there and I thought we were going to be in trouble,” Statzer said following a 35-21 victory at No. 9 Big Valley Christian. “We were able to get him charged back up and he was huge in the second half.”

From breath taken to breath-taking, Ramirez sparkled for the 10th-ranked Wildcats, a fearless bunch with a dangerous cast of two-way players and a coach with a salt-and-pepper ZZ Top beard.

Ramirez scored three touchdowns and picked off Big Valley Christian quarterback Gunnar Selover, one of four turnovers by the mistake-prone, injury-depleted Lions. He scored on catches of 42 and 22 yards, and then plowed in from the 1-yard line as the third quarter buzzer sounded.

Nothing could stop Ramirez, not even the air leaving his lungs.

“I’ve got really bad asthma, but we fight through it,” Ramirez said with a mile-wide smile. “Love football, so we had to.”

Waterford attacked with a quick-strike offense orchestrated by Michael Vivo, one of the region’s top dual-threat quarterbacks. Vivo was 11 of 19 for 232 yards and three touchdowns. He also had 92 yards and a score on 14 carries.

The Wildcats trailed 6-0 after the first 12 minutes, but found their footing early in the second quarter, scoring 14 points in a 28-second span.

Vivo pushed his way in from the 1, capping a drive in which he was responsible for 58 of the 63 yards. After Javyn Drobnick fumbled on the very next play, Vivo found Ramirez alone up the seam for a 42-yard scoring strike to make it 14-6 in the blink of an eye.

“That’s what we do,” Ramirez said. “We got the fast offense. We got the hurry-up offense.”

Waterford improved to 3-0 and now looks forward to its Southern League opener against No. 5 Ripon Christian (3-0), which was idle on Friday.

The Wildcats look forward to that match-up with confidence. The offense pulled away from the Lions with a 21-point third quarter, including 15 points in 94 seconds, and the defense forced four turnovers and tackled Drobnick for a loss seven times. One week after Ripon Christian collected its statement win, Waterford bagged its own, going behind enemy lines and ruining the Lions' home opener.

“I’m glad we’ve been tested. I didn’t want to be tested for the first time by RC,” Statzer said. “I was sweating bullets at halftime. We were sputtering around. Usually when we get (media) attention, we lay an egg and I thought it was coming. The boys dug deep in the second half and the defense stepped up. They got it rolling.”

Drobnick had 135 yards on 27 carries, but was limited to just 43 yards in the second half. He had two touchdowns, including a 19-yard scoring run to give the Lions a 21-14 lead early in the third quarter.

Waterford answered three plays later with a 64-yard screen pass to Jacob Stout, who later had a 98-yard touchdown reception negated by a block in the back.

“People got a lot to learn about Waterford,” Ramirez said, thumping his chest. “We’re for real. We’re coming. We’re coming for that league (title). Watch out for Waterford.”

Big Valley Christian lost senior offensive lineman Anthony McDonald to a knee injury on the fourth play of the game. The coaching staff feared it might be dislocated.

Drobnick was also hobbled by an injury late, and Big Valley played without middle linebacker and fullback Caleb Van Donselaar (ankle). Selover battled flu-like symptoms and also had to leave the game for a play.

“What happened happened,” Berkefeld said of the loss. “That’s kind of our program philosophy: We forget about what happened. We celebrate it or mourn it, and then we move on. The kids are going to have a little extra motivation because of the team we’re playing.”