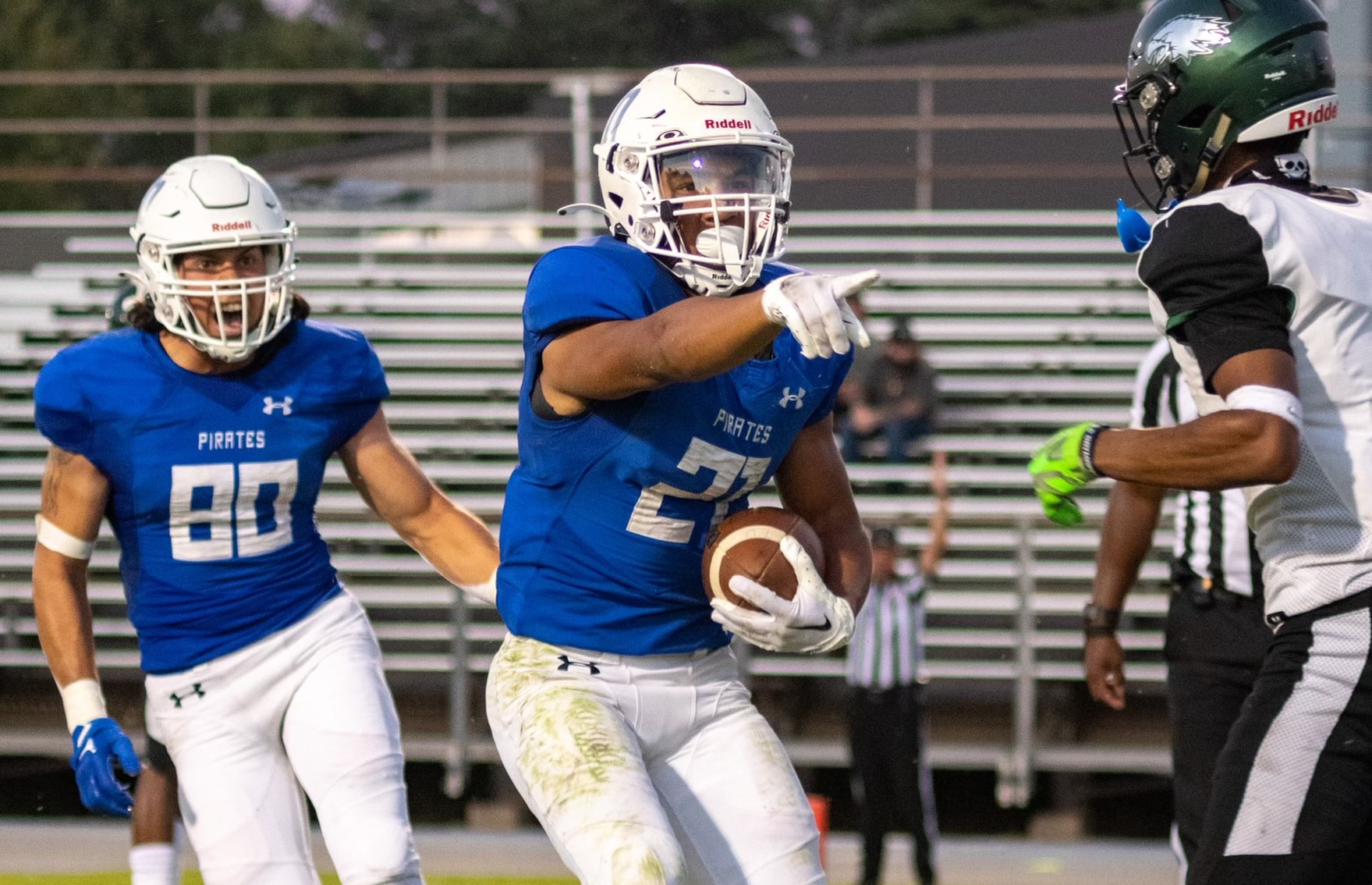 Sophomore Jacob DeJesus leads the Modesto Junior College football team in receiving, but it's his leadership that has helped guide the Pirates back to the Northern California playoff. (Diego Hernandez)

'We're still fighting': Despite adversity, Modesto JC finds itself back in NorCals

Sixty-eight community college teams in California teed it up for the 2022 season. Only eight still can win a state title.

Amazing, one of them is Modesto Junior College.

“Despite all the craziness, the guys made it happen,” MJC coach Rusty Stivers said. “Now, everybody’s 0-0 in a single-elimination tournament.”

It’s not unusual for MJC to reach the four-team Northern California bracket. This is its third advance since 2016. The amazing part stems from how the Pirates (5-5) did it.

Somehow and some way, No. 4 seeded MJC will meet powerful and top-seeded College of San Mateo (9-1) Saturday at noon at the Bulldogs’ hilltop stadium. That MJC was smoked by San Mateo 35-14 at the same venue on Sept. 17 only enhances Modesto’s longshot status.

The other NorCal matchup brings together Laney of Oakland (9-1), the 2018 state champion, at home against No. 3 seed American River (7-3) Saturday at 5 p.m. It’s more than a little noteworthy that MJC lost to its fellow NorCal semifinalists.

“If you want to win, you have to play the best,” Stivers said. “We’ve been through adversity like you can’t believe, but we’re still fighting.”

MJC squeezed onto the top line by sharing the Valley Conference title with Fresno for the second straight year. Only this time, the Pirates will represent the league on the strength of last week’s 28-20 victory over the Rams at old Ratcliffe Stadium.

The victory, Modesto’s first over Fresno in six years, also marked an exception to the rule for Rams veteran coach Tony Caviglia. His Rams were a gaudy 17-2 over Modesto until last week.

But make no mistake, the Pirates were the better team on the day. They startled their hosts by building a 28-6 lead, then staved off a late Fresno rally.

Stivers built Modesto’s recent success with a non-stop prolific offense, but the Pirates saved the 2022 season with a stout defense. Against Fresno, Fayzon Allen’s pick-6 opened the scoring, and Peyton’s Bradford’s tackle-for-loss in the end zone for a safety increased the lead to 9-0.

Bradford and fellow linebacker Cam Snow have roamed sideline to sideline all season for big plays. Jalon Jackson, a developing corner and bounceback from UC Davis, made a diving interception near the pylon late in the first half to keep Modesto in charge against Fresno.

The defense sustained the momentum vs. Fresno by forcing two turnovers on downs in MJC territory during the third quarter. Then, late in the game, two FCC turnovers ended its comeback. MJC compiled a suitable answer to Fresno, which stole last year's showdown on two fourth-quarter touchdowns on defense, the latter a 97-yard scoop-and-score.

On offense, the Pirates relied on running back Kimoni Stanley who rushed for 119 yards and two touchdowns. Receiver Jacob DeJesus caught six pases for 81 yards and quarterback Keith Orona set up a touchdown with a long run.

Orona’s emergence serves as a metaphor for Modesto’s season. He started the campaign as a grayshirt, which means his collegiate five-years-to-play-four clock wasn’t scheduled to start until 2023. His status changed because MJC was four-alarm desperate.

The Pirates opened 1-4, including last-second losses to Laney and American River. Everything else unraveled at San Mateo when top quarterbacks Luke Weaver and Marcus Ordunez and receiver Jonathan Taylor all fell to season-ending injuries.

Cruz Marines filled in for a spell at QB, but eventually the job fell to Orona. The midseason bye was well-timed, and MJC rebooted for league play. Stivers pointed to the poise and leadership of the team captains – DeJesus and center Alex Ramirez on offense and Bradford and Snow on defense – for the turnaround.

“When you’re 1-4 and you were supposed to be good, it’s easy to point fingers,” Stivers said. “I think we held together because of our captains. The rest of the guys followed their lead.”

Orona’s development, coupled with the defense and a reliable rushing attack, changed the course of the MJC season. The Pirates went 4-1 in league and overcame a turnover-ridden loss to College of the Sequoias the week before the Fresno game. The defense allowed only 60 points in five conference games.

“He (Orona) gets better every game,” Stivers said. “He was thrown into the fire against Butte. We couldn’t have gone this far without him.”

Modesto trailed San Mateo 14-7 in the third quarter before the Bulldogs imposed their will. The Pirates own wins over San Mateo in 2016 and ’18, but both were earned at MJC Stadium. They’ve struggled at CSM’s scenic home.

“We’ll have to play field-position football and punch it in when we have a chance,” Stivers said. “San Mateo is so good but I think our defense is good.”

NOTES – The California Community College Athletic Association announced the brackets and 12 bowl games Sunday. The Southern California semifinalists are top-seeded and 10-0 Riverside (beaten by City College of San Francisco in the 2021 title game) vs. Ventura and No. 2 Fullerton vs. Mt. San Antonio. … Merced (8-2) travels to Feather River (10-0) for the NCFC American Championship Bowl on Saturday at noon. The Blue Devils shared the Golden Coast title with Monterey Peninsula after their 31-19 loss to the Lobos on Saturday. … Aiden Taylor leads all MJC ball carriers with 818 yards and 10 touchdowns. He played last week but nursed an injury.  DeJesus has caught 62 passes for 894 yards and five TDs. … MJC reached the NorCal finals in 2019 after a win over American River but then was beaten by San Mateo.