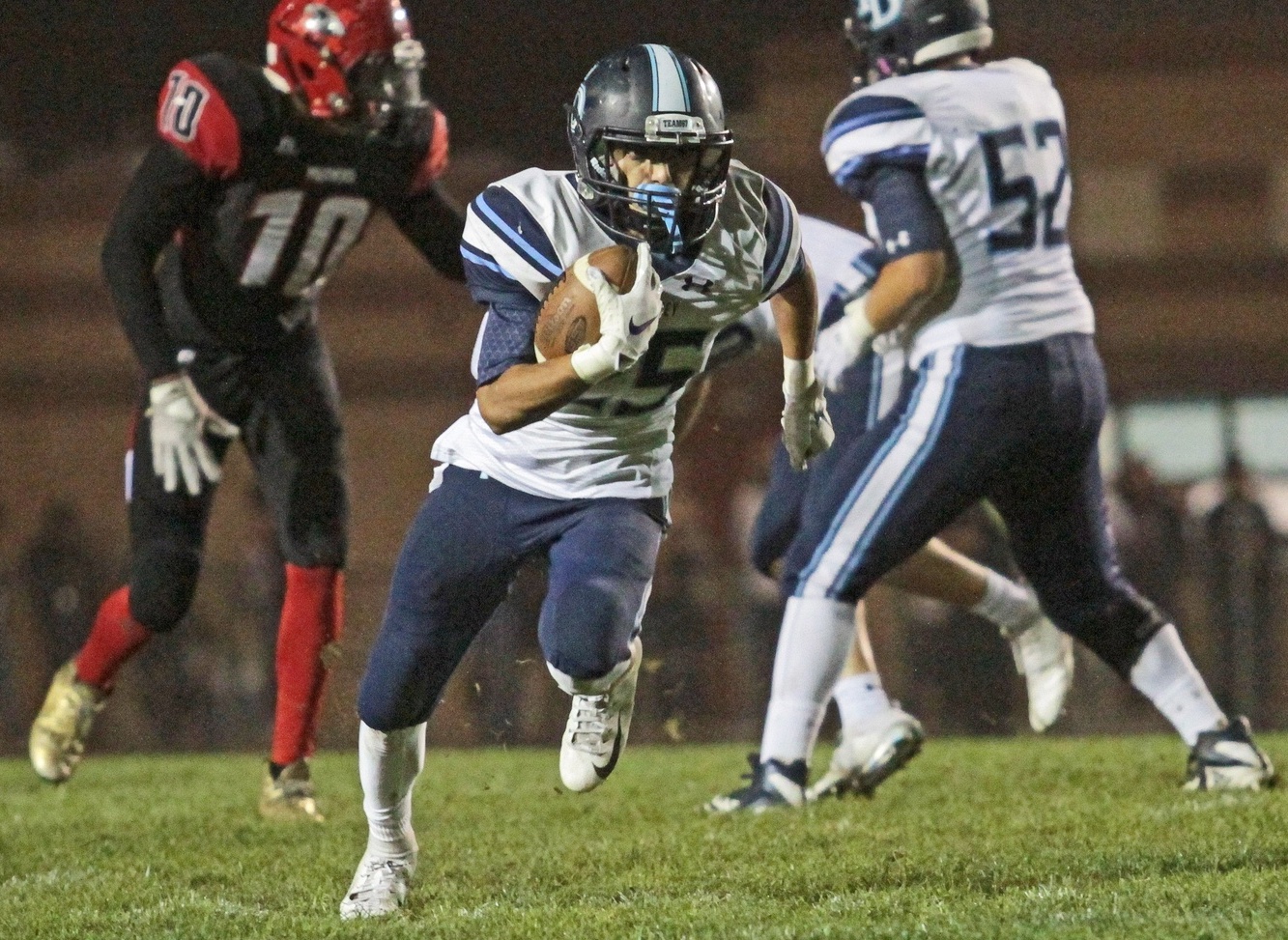 Downey High running back Robert Rivera might be the Knights' toughest player, pound for pound. Rivera rushed for 823 yards and eight touchdowns in an offense predicated on the pass. (Daniel Harris Photography)

Chasing history: Is the region's rushing record in jeopardy this fall?

One season after a lightning-and-thunder show carried Hilmar High to a historic state football championship, running backs will once again rule the region.

Rushing king Javyn Drobnick returns for Big Valley Christian, a small-school program seeking its first Sac-Joaquin Section title, and the senior is looking to build on a record-setting campaign. Drobnick kicked off the 2018 season with a school-record 376 yards in a victory over Harker of San Jose and never slowed. He finished with a regional-best 2,211 yards and 26 touchdowns.

Built like a bull, Drobnick will hunt Will Semone’s single-season rushing record of 2,851 yards, a mark set during Oakdale’s state title run in 2016.

He won’t be alone.

Drobnick is joined by a fleet of game-changing backs, each capable of putting a defense in the blender. Here’s a look at some of the region's top returning ball carriers, in no particular order:

Zeke Saffar, Oakdale: Saffar rushed for 1,500 yards in his first varsity season and has a chance to join Oakdale alum Semone and Cameron Cherry (2017) as the school’s only 2,000-yard rushers.

Kimoni Stanley, Sierra: Another promising junior, Stanley made his varsity debut with 1,375 yards and 15 touchdowns for the Timberwolves. Stanley averaged nearly 9 yards per carry.

Trabron Russell, Manteca: Part of a three-headed monster for the Buffaloes, who also lean on reigning co-Valley Oak League Offensive MVP Jacob DeJesus and quarterback Ryan Ward, who has committed to play baseball at the University of the Pacific. Russell rushed for 1,320 yards and 18 touchdowns last fall.

Charles Jackson, Atwater: Despite nagging injuries, Jackson sparked a turnaround season for the Falcons with 1,285 yards and 12 touchdowns. Atwater enjoyed a four-game winning streak and started Central California Conference season 2-0 for the first time since 2008.

Desmond Thompson, Merced: Often overshadowed by Dhameer Warren and Xavier Stewart, Thompson slashed and dashed his way to a 1,000-yard season as the Bears completed a perfect regular season and returned to the top of the Central California Conference.

Robert Rivera, Downey: Though he split carries in an offense predicated on the pass, Rivera made the most of his opportunities. He rushed for 823 yards and eight TDs, and barring injury, he should see a significant jump in both categories.

‍Luke Anderson, Escalon: The Cougars have the deepest roster of running backs in the region, but Anderson (740 yards, 10 touchdowns) may have the most potential. Escalon’s strongest football player is a clock-killing bruiser, and he’s cast perfectly for the wars of the Trans-Valley League.

Did we miss someone? Let us know with a message at frontrowpreps@gmail.com, or connect with us on Twitter @frontrowpreps.