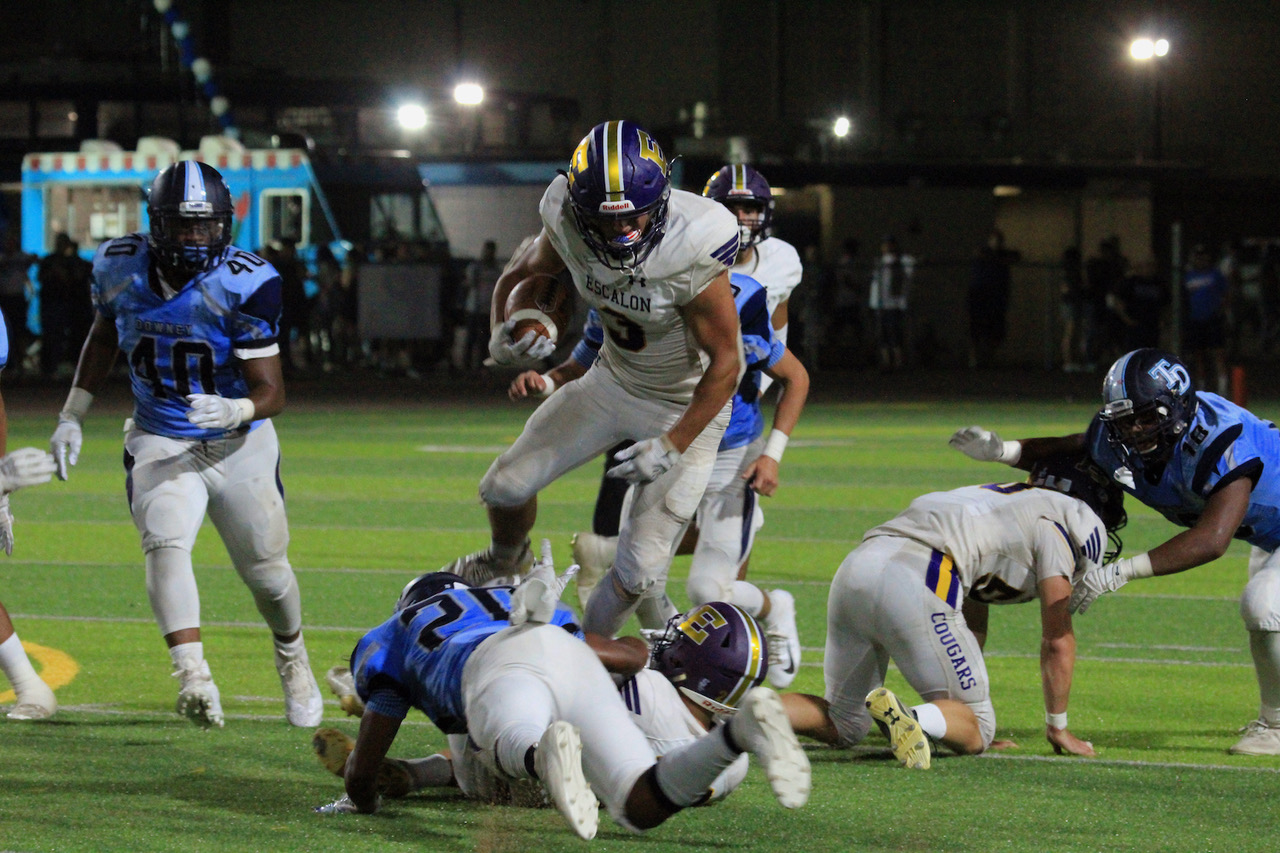 ESCALON — Utter the phrase “Wing-T offense” and what comes to mind?

But what almost certainly doesn’t come to mind is the term “cutting edge.” And you’d be right not to think of the Wing-T that way. It’s a decades-old system that has seen its heyday come and go.

But what’s old is new again.

The fast, fun and fan-favorite Spread offense is so ubiquitous these days that when a Wing-T team comes along opponents don’t really know how to defend the scheme.

Teams don’t have to rely on a single college-bound star to make the Wing-T effective. Deception evens the playing field.

“It’s got misdirection built into it,” said Loureiro. “The fullback, the quarterback and either halfback can beat you.”

Escalon defensive coordinator Brandon Hoover, who sees the defense every day in practice, wants no part of trying to defend the Wing-T in a game.

“I’ll take the spread any day of the week,” said Hoover, now in his 11th season coaching at his alma mater. “I wouldn’t want to defend the Wing-T. It’s maddening to defend.”

Just ask Pleasant Valley, the team Escalon defeated to reach today’s CIF State 4-A championship game against La Jolla. The Vikings coach staff kept its players on the field at halftime last week to conduct something of a mini-clinic on how to defend what they’d just seen for the previous 24 minutes. It mattered little as the Cougars built a 13-9 halftime cushion into a 41-17 rout.

The Escalon players have literally grown up in the system, having been introduced to the Wing-T back in their Pop Warner days.

“We’ve run the Wing-T for all our football careers,” said offensive lineman PJ Flores. “There’s nothing like the Wing-T. It’s a powerhouse football formation.”

Head coach Andrew Beam, who played for Loureiro and helped Escalon to the 2005 Sac-Joaquin Section title, went on to play collegiately at San Joaquin Delta and then Bowling Green University before transferring to the University of Findlay in Ohio. He ran the Spread at his first two stops and the Pistol at Findlay, but returned to his roots and runs the Wing-T at Escalon, though he’s souped-up the playbook left to him by Loureiro.

“We’ve very much added our own variations to it, but it’s still very much the traditional Wing-T,” said Beam, now in his second year guiding the Cougars. “Honestly, it comes down to the type of guys we have, and I don’t mean that in a negative way. We just don’t have the guys that can run the Spread.”

But they do have the guys to run the Wing-T. Most schools do. It’s not a prerequisite to have linemen that are behemoths and can dominate blocks for several seconds. The Wing-T relies on speed, deception, angles and outnumbering your opponent at the point of attack.

“It takes everyone doing their job,” said running back Colton Panero. “It’s not just a one-person show. The offense won’t work if one guy is not doing his job.”

And then there’s the fact that it’s a good bad-weather offense, since passing isn’t the primary focus as it is in the Spread.

Late in the season, when bad weather becomes a factor, teams need to be able to run the ball.

“I don’t care what anybody says,” said Loureiro, who guided Escalon to eight section crowns and the 2010 state title, played in a downpour in Southern California. “He who runs the ball and plays defense wins at the end of the year.”

That mantra will be put to the ultimate test tonight at Escalon’s Lloyd Engel Field.

Kickoff is slated for 6 p.m.