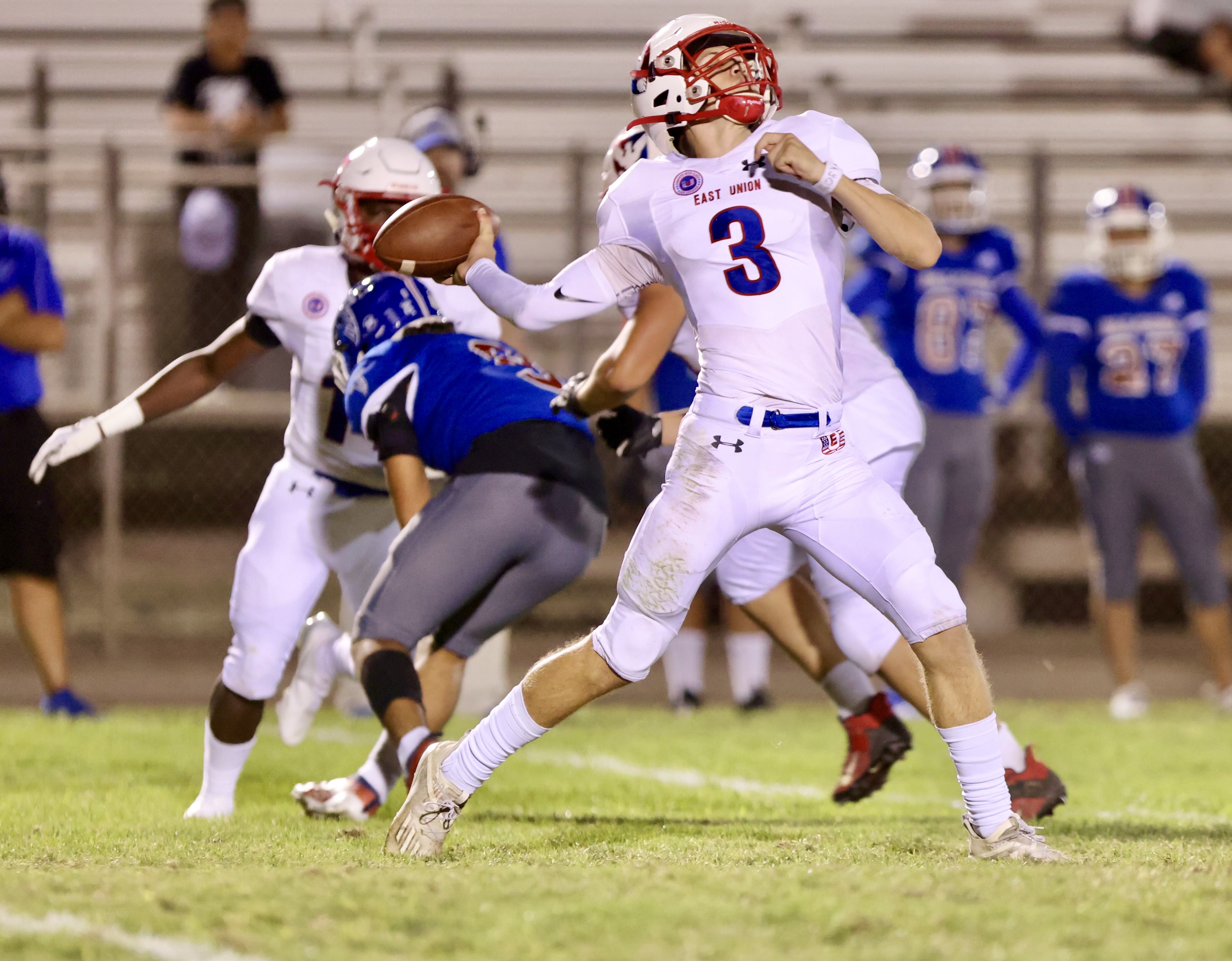 Luke Weaver, a senior, slings the ball with authority from a 6-foot-3 platform and quickly covers ground with long strides. He has passed for 2,454 yards and 22 touchdowns with only six interceptions, and he’s also rushed for 503 yards and 13 TDs. (Wayne Thallander)

Weaver, EU take on state's best: 'When he leads us onto the field, we have a shot'

Is he like Sisyphus, the sad soul in Greek mythology condemned to push a boulder up a hill for eternity? Or is he closer to the NFL icon Vince Lombardi who once said in pursuit of perfection, “Along the way, we shall catch excellence”?

Probably the latter in the real world, but the slender quarterback for East Union High sets through-the-roof standards for a reason. And he knows they’ll often lead him to frustration.

The Lancers from Manteca (5-4, 2-3) gladly will accept Weaver for who he is – one of the area’s most productive quarterbacks.

Weaver, a senior, slings the ball with authority from a 6-foot-3 platform and quickly covers ground with long strides. He has passed for 2,454 yards and 22 touchdowns with only six interceptions, and he’s also rushed for 503 yards and 13 TDs.

His skill-set is easy to see, but he’s got leadership skills to match. Simply, East Union will qualify for the Sac-Joaquin Section playoffs for the first time in four years because of him.

“When No. 3 (Weaver) leads us onto the field, we know we have a shot,” first-year head coach Mike Kuhnlenz praised.

For those who enjoy top-tier prep quarterbacks, Dino Cunial Field at East Union is the No. 1 place Friday night. Weaver and the Lancers will welcome Kimball and its quarterback Nicholas Coronado, whose 3,321 passing yards this season (43 touchdowns, plus 6 rushing) is tops in California and fourth in the nation according to maxpreps.com.

Kuhnlenz has coached both. He served as the Jaguars’ coach until last spring, when he was dismissed following a controversial scuffle during a scrimmage. East Union acted quickly for a man it already knew. He has served as a campus monitor for six years.

“They’re both extremely ultra-competitive players, and the team follows them,” Kuhnlenz said in reference to Weaver and Coronado. “I’m extremely lucky to have coached these guys who’ve made me look like a good play-caller.”

Weaver’s expectations are bred from a household of overachievers. The youngest of three, Luke had his path at EU set for him by sister Rachel, a former cheerleader and now an accomplished singer at William Jessup University; and brother Jack, a former QB at East Union and Modesto Junior College and a graduate of San Diego State.

Jack Weaver, now a grad student at Cal Poly, stands only 5-10 but he also guided East Union into the postseason with several late-game comebacks. Yes, he and Luke go back-and-forth regarding their height difference. All told, East Union has snapped the ball to the Weaver brothers five of the last eight seasons.

Mark and Lisa Weaver, Manteca residents, sent all three children to Ripon Christian Elementary School, then to East Union. Faith-based and goal-minded, each of the trio has led in their own way.

Luke’s challenge this season was daunting. He and his teammates were asked to switch from a Wing-T, primarily a power offense, to a wide-open spread attack. The season has been mercurial with lopsided wins and tough losses, including a setback to still unbeaten Windsor of Santa Rosa.

The Valley Oak League has served as a thankless gauntlet for East Union, as it has struggled against resident powerhouses Central Catholic, Oakdale and Manteca. But this fall has seen a slight change-of-pace. Central Catholic (8-1, 5-0) clearly has emerged as the best, but Kimball (8-1, 4-1) sits in second place after wins over Oakdale and Manteca.

Then there’s East Union, which led Manteca until the Buffaloes pulled out a 40-34 win in overtime. The Lancers haven’t beaten Manteca since 2010. Last week, it spotted Central Catholic a small hillside of poundage up-front yet led the Raiders by a point at halftime before falling 38-27. EU never has beaten Central Catholic.

The one constant has been Weaver, whose all-business throws to Dylan Lee (54 catches, 1,100 yards, 13 TDs), Kainoa Ontai, Nickolas Luna and Jacob Toste have entertained fans all season. The 6-2 Lee, a junior, often runs underneath Weaver’s long passes for major yardage.

“He’ll see the defense and knows right away where the ball is going to go,” Lee said. “He’ll kind of give me a look and I’ll see it in his eyes.”

“I’ll tell him something early in the game, and he’ll remind me of it during the second half,” the coach said. “He’s just a great high-character kid, a real student-athlete. For all he’s done in football, he’s even a better person.”

Weaver wants to continue his football career. Until then, he’ll keep pushing the boulder up the hill.

“We’ve gone through adversity and persevered through it,” he said. “We have to finish these games off…and learn how to win as a team."