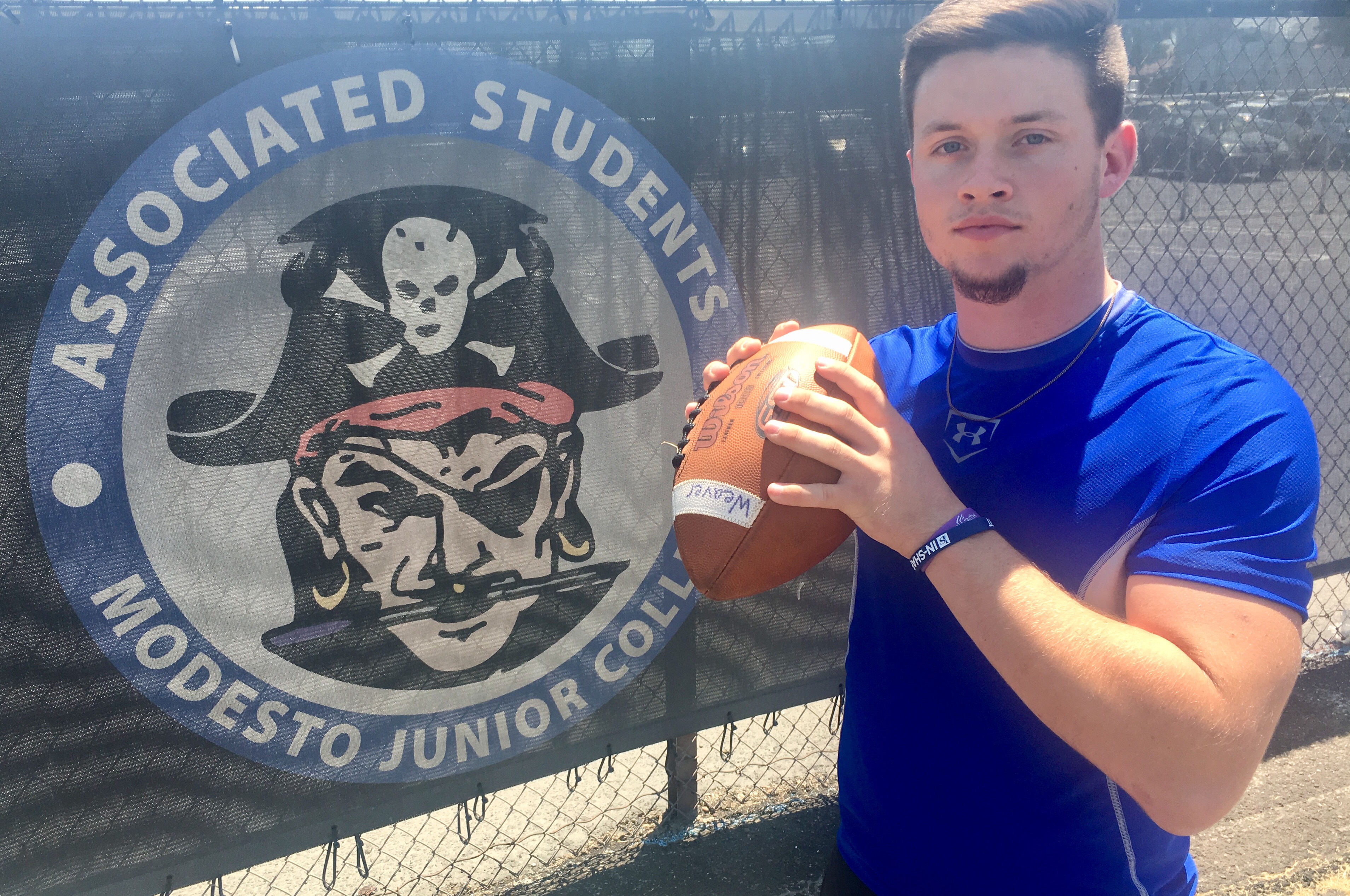 Jack Weaver spun a football between his hands as a trio of pint-sized wide receivers ran playground routes in an empty stadium.

In the distance, a work crew set up behind the Modesto Junior College home sideline, scrambling to ready the facility. With football on the horizon — practices officially begin Aug. 6 — everything is under construction, including the Pirates’ depth chart at quarterback.

Two of the region's best from the Class of 2016 will look to succeed freshman phenom Danny Velasquez, who created the competition with his sudden transfer to Portland State in the spring.

An all-Valley Oak League performer and Lions All-Star while at East Union, Weaver has returned to the Central Valley to rewrite his recruitment story. After graduating with top honors from East Union, Weaver enrolled at the College of Idaho, following in the footsteps of another East Union and MJC alumnus, Teejay Gordon.

He wasn’t the only one.

Former Pitman High star Jacob Perez started two games for Delta College last fall, including the season finale against the Pirates. Perez burned MJC for 45 points and more than 400 yards of total offense, but chose to transfer because “his buddies from Pitman said they had a good time here and he did not want to commute to Stockton,” Pirates coach Rusty Stivers said.

One season after his depth at the QB position was tested, Stivers welcomes the competition and extra bodies. He says there are a lot of similarities between Weaver and Perez, both athletically and cerebrally.

“Both QBs are bright and fit our style. Jack did not get any reps in the spring, but has quickly adapted to the offense,” said Stivers, whose "NASCAR" offense has ranked among the state's best over the last six years. From 2012 to 2016, MJC led the state in points per game (39.6) and yards (486.2). “I am really impressed with both at this point in the season. They will both be confident going into our first official practice.”

Modesto opens the season at home against Laney College on Sept. 1.

Weaver sat down with Front Row to discuss his transfer, the quarterback battle and the prospects of leading one of the most explosive offenses in Northern California:

JW: It was an awesome experience and I love the people and coaches and everything. The size of the school and the fit just didn’t feel right for me, so pretty early on while I was up there I just knew it wasn’t where I wanted to be for the next four years. Pretty early on in the process I called coach Stivers and told him my situation and how I wanted to come back, and (asked him) what the options were.

FR: Keep it real — did you miss California?

JW: Oh, yeah. California is definitely where it’s at.

FR: What can you take away from the Idaho experience that can help you in your first season at MJC?

JW: The football experience was definitely awesome. It’s definitely big boy football up there. You’re playing serious competition in the Frontier Conference. The work ethic, the 6 a.m. workouts, and the competition will be able to help me out this season.

FR: In this battle for the starting job with former Pitman and Delta Junior College quarterback Jacob Perez, who has the advantage?

JW: There’s no real advantage right now. We’re both pushing each other every day in practice. We both take reps with the (No. 1s). He’s a super cool dude; we’re friends and all of the good stuff. We’ve just been pushing each other to step our game up each day, get to know the offense better, (become) more fluent and more comfortable with the offense. We push each other; there’s no real advantage.

FR: How exciting is it to be in an offense like this?

JW: Coach Stivers has a great setup — simple, super fast system. Our running backs are some of the top dudes in the area. We got Devan Bass (Pitman High), who tore it up last year, Darus Nelson (Oakdale High), Kam Beamon (Manteca High) and Cam Cherry (Oakdale) all in the backfield. That’s ridiculous to me. Outside we have weapons. Everything is coming together, the rhythm and everything. We’re starting to pick up the pace, so we can go fast like coach Stivers wants.

FR: When you look at the success that Danny Velasquez had last year — when you understand his sudden rise — is it encouraging for you?

JW: He even started out as a slot, and this spring I actually played a little slot while Danny was still at the helm for quarterback. It shows it’s kind of a plug-in system. It really shows off the athletes the offense has. He tore it up last year and got a D-I offer, so it's definitely encouraging and exciting.