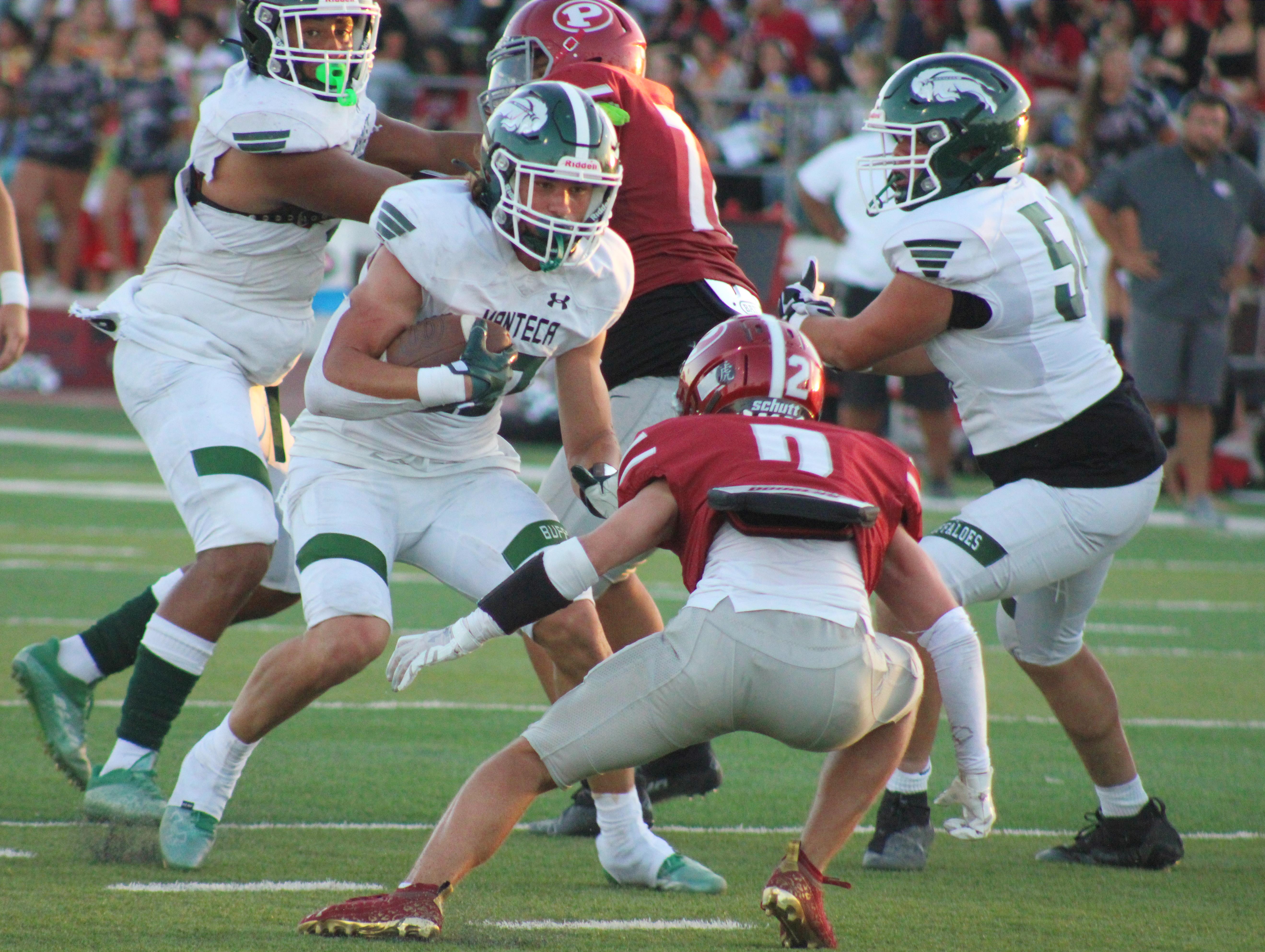 Who will it be? Manteca's Nichelson announces college choice Tuesday night

The Turlock High defense finally had corraled Blake Nichelson. The Bulldogs beat the Manteca High star to the point of attack in 2021 and surely had won the play.

Nichelson, pivoting free with a move that can’t be coached, created daylight and – whoosh! – there he sped down the field. Another Nichelson touchdown. Another highlight film. Another reason why he’s unforgettable on a football field.

“I think he’s one of the most special kids I’ve seen on the field in the last decade,” said veteran Turlock coach James Peterson, who remembered the move Nichelson made like it was yesterday. “He is the real deal.”

Peterson could not have delivered a different point of view. His Bulldogs the last two years have been given the Blake Nichelson Treatment: 439 rushing yards and 11 touchdowns (six TDs last week), plus nonstop destruction by Nichelson as a scheme-beating linebacker.

“There is no time in the evening when he shuts it off. He plays all night,” the Turlock coach continued. “No one compares to this kid.”

Which is why Nichelson will make a much-anticipated announcement Tuesday night (Sept. 20) at 6:30 at Manteca High. Three bona fide blue-bloods – UCLA, Oregon and Florida State – reportedly are the finalists to acquire his football services. At least 19 other universities, including most on the West Coast, also would roll out a red carpet for him.

A clue: Watching Nichelson last week from behind the northern end zone at Guss Schmiedt Field was Randy Shannon, the defense coordinator at Florida State and former head coach at Miami. Fittingly, the Buffaloes turned Nichelson loose on homecoming night.

Most observers of such upcoming signing nights believe Nichelson’s decision is down to Oregon or Florida State, but who really knows other than the young man and his family?

This much is true: No Manteca High product ever has drawn this type of attention. It invites the question: Could he be the best football player in about a century of green-and-white football?

The answer: Not so fast, my friend.

Manteca points with pride to its eight Sac-Joaquin Section title banners, but its football program has been first-rate long before the playoffs were sanctioned in 1975. The program has developed a steady stream of FBS-level talent: Gino Campiotti (currently the quarterback at UMass), Michael Turner (Arizona), Don Morgan (Nevada, plus an NFL career), Pete Nelson (Oregon), Don Widmer (UCLA) and Larry Lathrop (Cal) among others. FYI: Morgan’s wife is Sandra Douglass Morgan, the president of the Las Vegas Raiders.

The MHS grad who’s compiled the best career resume is Paul Wiggin, a two-time All-America selection at Stanford (1955-56), who went on to a distinguished 11-season career as a defensive end with the Cleveland Browns. He twice was named All-Pro and his Browns won the NFL title in 1964. Later, he became a head coach for Stanford and the Kansas City Chiefs.

Wiggin, 87 (he spent one year at Modesto Junior College before he transferred to Stanford), continues his amazing 65-year NFL journey as the senior consultant for pro personnel with the Minnesota Vikings.

To be fair, how Nichelson ranks among Manteca’s best is a to-be-continued thing. He’s only four games into his senior season. And history is a dangerous subject. How does one compare a Paul Wiggin to a Don Morgan or any other former star?

Nichelson is not the first Buffalo to be coveted by heavyweights. Eric Reis, the coach who guided Manteca to five section titles between 2002 and ’17, recalls how Pete Carroll and USC chased Turner before he settled on U of A.

Nichelson also is not the first to post glossy statistics. Alex Laurel scored 49 touchdowns during Manteca’s march to the NorCals in 2013.

“There are just different eras,” Reis said. “Blake is one of most highly recruited players … He does pass the eyeball test. He’s something special.”

It’s to Nichelson’s credit that he makes such an exercise so provocative. Reis is right. The eyeball test is passed after watching him just once.

Nichelson, 6-foot-3 and 210 pounds, possesses 4.47-second speed in the 40 and he chases down any opposing ball carrier at will (most colleges envision him as an outside linebacker).  His athleticism stands out several levels above most of the other 21 players on the field.

Consider: He has scored 57 touchdowns in 17 games the last two years, and that’s while pulling two-way duty. When he was out with an injury last year, Manteca lost to Oakdale 28-0. With him back for the Division III final, the Buffaloes won 35-28.

“He’s definitely one of the best to wear the green and white,” Manteca coach Mark Varnum said. “He’s trying to beat you every play. And our guys have to stop him every day!”

Though he has Manteca and Ripon connections, Nichelson spent his freshman year at Central Catholic. It wasn’t a good fit, however, and his switch became most fortuitous for the Buffaloes.

And that brings us to Tuesday night and a high-profile announcement that will draw national attention. Nichelson is that good, and the lights will be that bright.