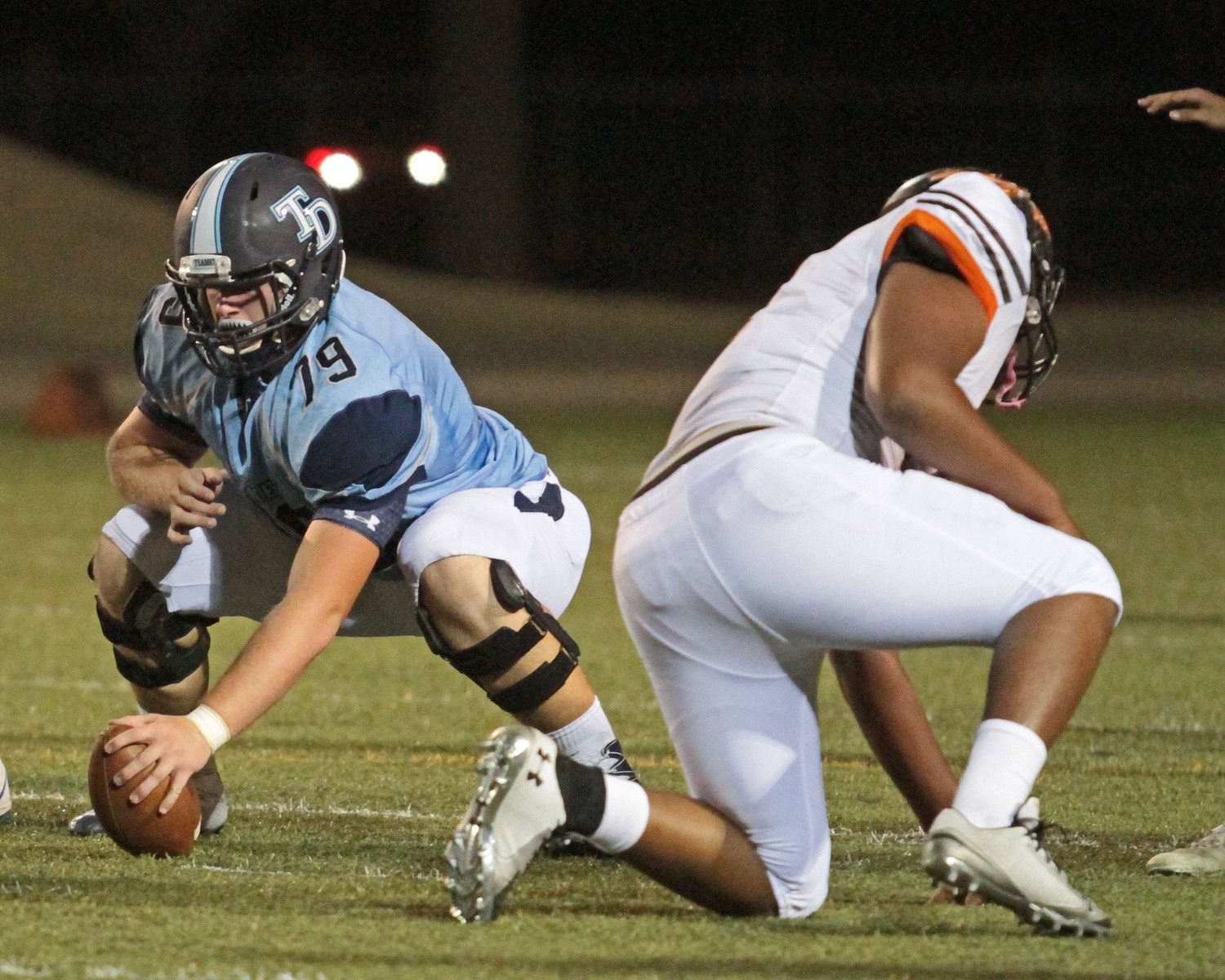 To whom senior center Jackson Betz will be snapping the ball on Sept. 28 remains a mystery after the injury to freshman quarterback Beau Green during 20-14 loss to McClymonds (Oakland) at Chuck Hughes Stadium in Modesto, Calif., on Sept. 14, 2018. Photo by Daniel Harris

Who will shoulder the load at QB for Downey in conference opener?

Two weeks ago, Downey High head coach Jeremy Plaa looked like he had his quarterback for the next four years. Two weeks from now, Plaa will have to choose from as many as four candidates to start Central California Athletic League play against Turlock High, the team many picked before the season to win the new conference's first-ever title.

"I did a very poor job of getting our backup quarterback ready," said Plaa. "(Gouker) had requested a move down to JV and so we honored that. It was bad timing on our part."

"(Difuntorum) wasn't quite ready, we didn't give him the reps," said Plaa. "So, we ended up going to Bryce Peterson, who was last year's quarterback and still can't thrown an overhand pass, it still bothers his shoulder too much to do so. Plus, he took a shot in the first quarter, as well, so he was already hurting, too."

Even without an effective quarterback, Downey was one play away from winning the game.

"McClymonds is a two-time state champion for a reason," said Plaa. "Probably the best defense we've seen all year and we've played Merced and Manteca, they're pretty good defenses themselves.

"Extremely physical, gigantic on the D-line. Our O-line graded out the worst that they've graded out all year and it had more to do with the opponent than it had to do with us."
Peterson was 1 of 2 for 55 yards and a TD, while Difuntorum was 1 of 4 with an interception that was returned for a score.

"It's just really hard to say now," said Plaa, when asked who would be the starter against Turlock. "Luckily, we have the bye week this week, so we'll have another week to kind of figure things out."

Peterson still is unable to throw an overhand pass, but that doesn't mean Plaa will shy away from using him against the Bulldogs.

"He can do everything else except for that," said Plaa. "So he can still do a lot of things from the quarterback position. He's one of our best athletes so he's still going to touch the ball a lot."