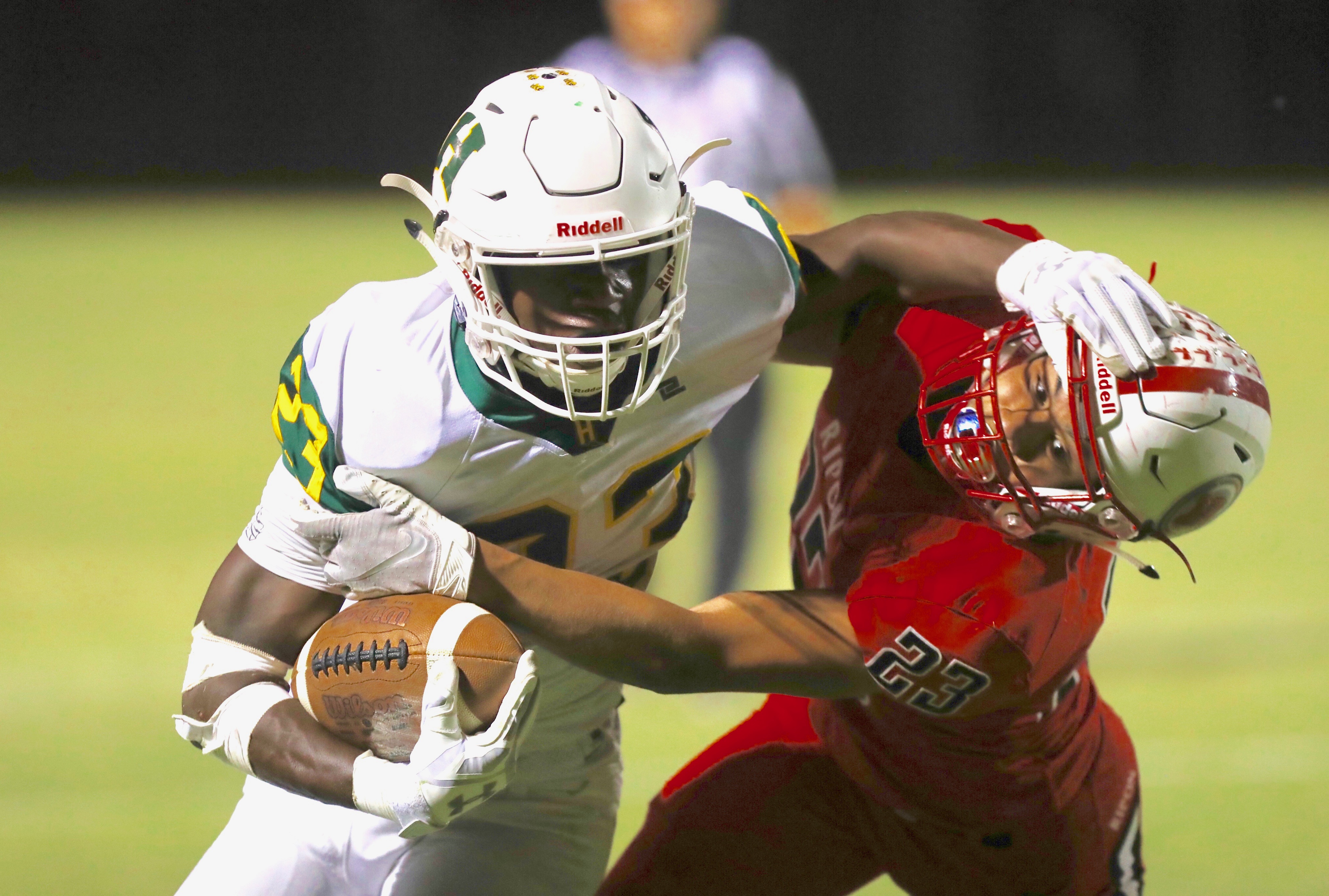 Hilmar running back Isaac Sharp tries to shed a tackler during a Trans-Valley League contest at Ripon. (Wayne Thallander)

Why Hilmar isn't afraid of unbeaten East Nicolaus: 'They haven't been tested'

HILMAR — Frank Marques and Travis Barker use the same superlatives to describe their high school football teams and small-town communities.

Except on Friday evening, one of them has to lose.

Barker and his East Nicolaus Spartans, a perennial Northern Section champion with a remarkable 61 victories over the last five years, venture into the lion’s den searching for a second CIF State final appearance in four years.

To reach the pinnacle game, though, the Spartans (13-0) will have to dispatch Hilmar (11-2) in what amounts to a home game for the two-time defending Sac-Joaquin Section Division VI champion.

“They’re a small high school and do a lot of great things,” said Marques, who has four section banners but is saving space on the gymnasium wall for regional and state decor. “They are very well-coached and scrappy as heck. We’re going to have our hands full. I talked to their coach on Monday at the state meeting. He goes, ‘You play hard-nosed football, just the way we like it. Our kids play the same type of brand.’ ”

The Spartans have averaged 12 wins under Barker’s watch and reached three consecutive regional bowls, including a state championship in 2015. East Nicolaus defeated Coronado, 16-6, to win the Division VI-AA state bowl. In each of the last two seasons, the Spartans’ bid at returning to a state bowl have been foiled by McClymonds of the Oakland Section.

They’re hungry, Marques said, but so are the Yellowjackets.

In those games, Hilmar was outscored 47-42 and can point to turnovers and self-inflicted wounds as the turning points. In contrast, East Nicolaus won all of its games by 19 points or more and shut out six consecutive opponents from Sept. 21 to Nov. 2.

“One of the things we have going for us, we have two losses and we’ve been in tough ball games,” Marques said. “If you look at their scores, they haven’t been tested.”

After a rugged run through the TVL, a conference in which it finished tied for third, Hilmar is finally peaking. After a scoreless first quarter, the Yellowjackets dismantled Ripon Christian in the Division VI final, 57-14.

“It was work mode,” Marques said. “You don’t have to talk about the hype of the game; they just go to work. They know it’s game time and for awhile now, they’ve been in that mode.”

East Nicolaus is paced by junior quarterback Gavin McAuliff who has accounted for more than 2,000 yards of total offense and 32 touchdowns. He is a true dual-threat out of the backfield, rushing for a team-high 1,069 yards and 19 scores.

Defensively, the Spartans remain attack-minded. They’ve got four players with at least four sacks and have created 24 turnovers. Marques says East Nicolaus’ defense reminds him of Ripon Christian’s much-ballyhooed unit, which topped the section in scoring … until it met Hilmar.

“Defensively, they swarm and play smash mouth. They bring constant pressure, four or give guys every time. They just want to smack you in the mouth,” Marques said. “They’re a lot like Ripon Christian, but we like the pressure.

“When you bring pressure, you leave people on an island, and when our running backs get through the line of scrimmage, there’s no one left. Pressure is something that fits our scheme.”