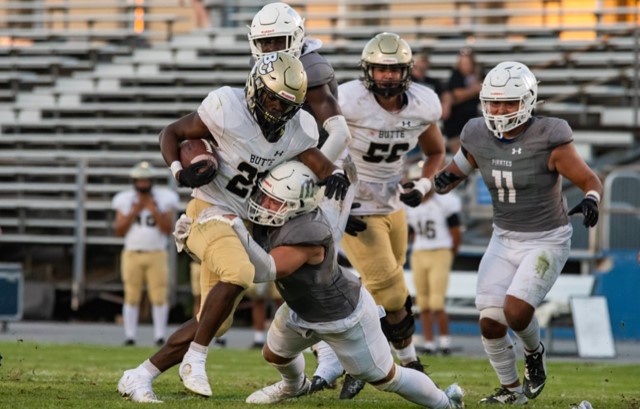 Modesto Junior College linebacker Cam Snow tackles a Butte running back during a 49-14 loss on Saturday, Sept. 24, 2022. Snow had of of the Pirates' highlights with an interception. (Diego Hernandez)

With quarterback Luke Weaver out for the season, Modesto Junior College football coach Rusty Stivers handed the keys to his NASCAR offense to two young QBs.

There were bumps in the road, evidenced by the Pirates' 49-14 loss to Butte on Saturday evening. As MJC's offense sputtered under the control of two freshmen signal callers, Cruz Marines (Gregori High) and Keith Orona (Enochs), the Roadrunners had no such problems, outgaining the Pirates 231-80 in passing yards and 247-142 on the ground, respectively.

MJC’s rushing attack wasn’t entirely diminished, however. Central Catholic’s Aiden Taylor accounted for both of the Pirates’ scores, rushing for 63 yards and two touchdowns on 13 attempts.

For the entirety of the first half, MJC was fighting from behind, and answered back in the third quarter with an interception in Roadrunner territory by former Oakdale Mustang linebacker Cam Snow.

It wasn’t until a fourth-and-goal penalty on MJC during a field goal attempt where Butte was able to capitalize on penalties and miscues, bringing the score to 34-14 going into the fourth quarter.

The Roadrunners took advantage of the Pirates’ defense, with four rushing touchdowns (two touchdowns on 79 yards and 17 carries for running back Caleb Ramseur) and and three passing touchdowns.

Throughout the game, Stivers rotated his quarterbacks with Marines taking the majority of the reps ahead of Orona. Both were under constant pressure, as the Pirates gave up seven sacks for 36 yards, one of which being a fourth quarter safety to final the score to 49-14.

The Pirates (1-3) head to Sacramento to face American River College (1-3). Both teams look to rebound from two-game losing skids.