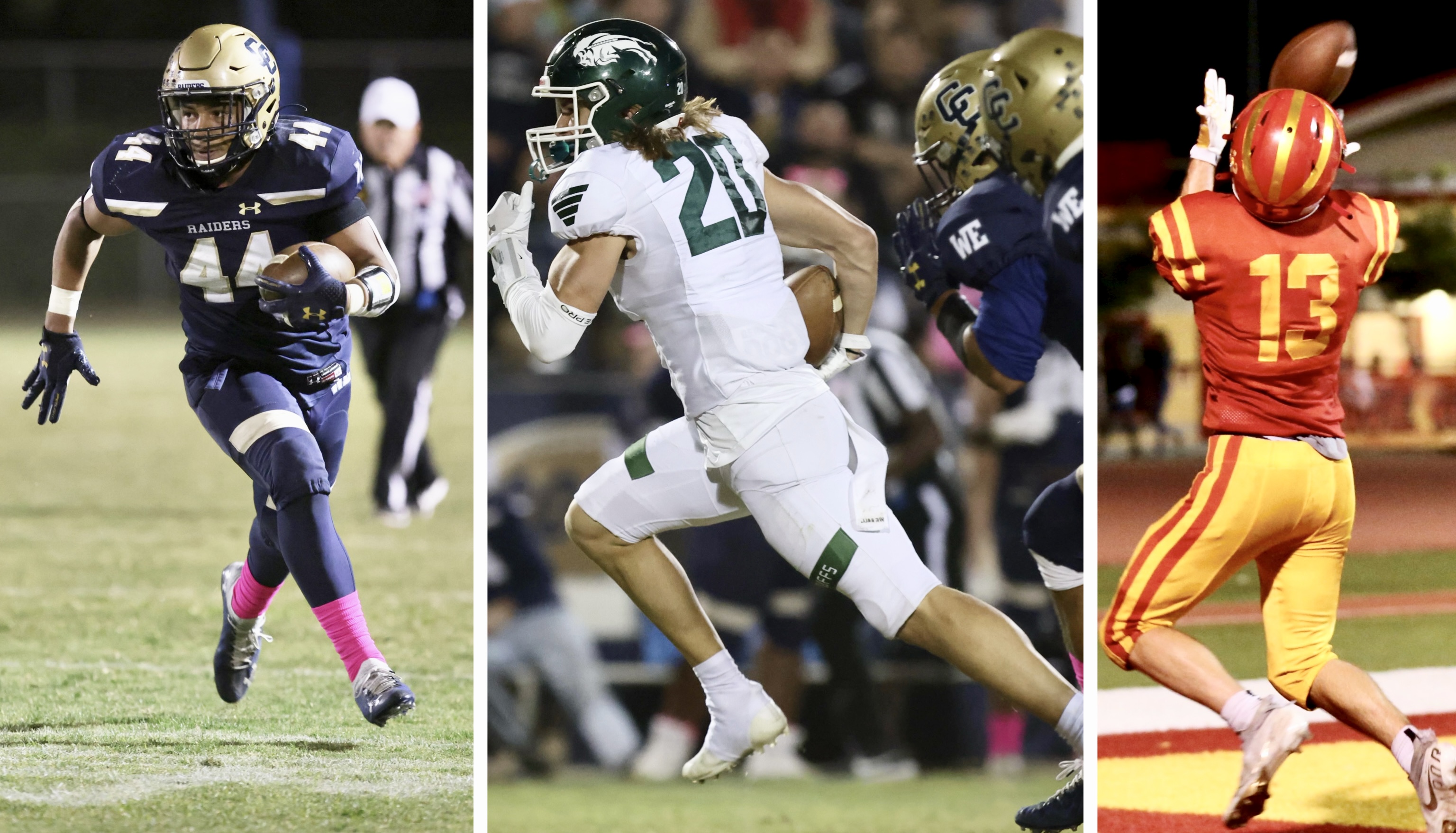 Worth the price of admission: Stars to watch in this weekend's section finals

They sat at 14 separate tables, their letterman’s jackets shining with achievement pins. With them were their coaches and proud administrators, happy to bask in the accolades of their student-athletes.

They represented the Final 14, the teams which will vie for Sac-Joaquin Section football titles this weekend.  The section was the host Monday in Lodi for a championship breakfast to set the stage for the seven upcoming championship games.

The field of 155 teams that began the season has been whittled to these 14, but here’s an idea while we await the important kickoffs. Let’s identify a must-see player from each local finalist, the kind of performer whose uniform number you don’t forgot, the star who makes your admission fee worth the price.

There’s more than one of those per roster, of course, in the frontrowpreps.com’s region. But for the sake of the argument, we’ll take a deep dive and point to that one must-see player who you will remember as you drive home.

Must-See Player for Central Catholic: The word “Pony” is inscribed on the letterman jacket of Aiden Taylor, Central Catholic’s powerful force at running back and inside linebacker. He goes by “Pony,” his childhood nickname, but he’s more of a quarterhorse thundering straight ahead down the track. Stopping the 5-11, 210-pounder often means taking a ride on his back. He’s rushed for 1,577 yards and 29 touchdowns, and the Raiders gather momentum just by watching him take over games. Central Catholic turned a 14-10 halftime deficit into a pivotal 38-14 victory at Oakdale, due in large part to Taylor’s production on both sides of the ball.  “He played his best game on defense last week,” said coach Roger Canepa in reference to CC’s 35-0 shutout in the semifinals over previously unbeaten Antelope.  “He’s always been a tough kid and a competitor. He was really good when we didn’t have (running back Julian) Lopez.”

Must-See Player for Oakdale: Kevin Camelin plays both offense and defense, punts, kicks, returns kicks, and boots both extra extra points and field goals. Perhaps he also sweeps the locker room and, truth be told, he probably would excel at that, too. The Mustangs would not have extended their season this long without him. “He’s a great student, plays hurt, just does it all,” said coach Trent Merzon, who tabbed Camelin as the Mustangs’ best all-around player. Without question, he’s been one of the centerpieces during Oakdale’s five-game winning streak (four via shutout) and especially during its overpowering playoff victories over Roseville and Patterson.  He has accounted for five touchdowns, plus all the PATs and long kickoffs, the last two weeks.  And something else to remember: He scored three of his team’s four touchdowns – two rushing and one via reception – during the Mustangs’ regular-season ending 28-0 win over Manteca.

Must-See Player for Manteca: The ultimate must-see player might be junior Blake Nichelson, the fleet do-it-all star for the Buffaloes. The stats he’s compiled are crazy-good: 1,677 rushing yards, 357 receiving yards and 38 touchdowns (31 rushing, seven receiving). But it’s his smooth stride – he hardly looks like he’s working hard – that reveals his athleticism. He easily pulls away from all pursuers. Nichelsen already has received offers from Boston College, Fresno State and Oregon State, with more surely to come. “He’s off the charts, a freak athletically…but he’s just a kid having fun out there,” Manteca coach Mark Varnum said. With Nichelson and a few of his teammates sidelined by injury, the Buffaloes lost the regular-season finale 28-0 to Oakdale. Yes, Manteca can’t wait for the rematch and a big dose of Nichelson magic. In overtime against East Union, his leveled off his pass rush, tipped the pass to himself and raced to the end zone to cap Manteca’s come-from-behind win over East Union.

Must-See Player for Merced: Name another 215-pound two-way lineman in the valley who can run a 4.6 40. The Bears’ Jaylen Thao-Booth starts and ends that list. “He is the heartbeat of our team,” said Rob Scheidt, who’s called Thao-Booth one of the best he’s coached in his 26 seasons at Merced. “He could play a lot of positions. We’re just a better team with him as a lineman. His versatility and unselfishness really stand out.” His five sacks anchored Merced’s quarterfinal win over East Union, and his athleticism decided the Bears’ dramatic 51-50 victory last week over Kimball. Scheidt opted for a game-deciding two-point conversion on the final play with Thao-Booth in mind. He aligned as an eligible receiver at left tackle, and the Bears quarterback Seth Scheidt – the coach’s son and one of Thao-Booth’s longtime friends – quickly tossed a lateral to Thao-Booth in the flat. He needed to cover about eight yards, but he beat one defender to the pylon. “We can’t even try that play without Jaylen’s speed,” Scheidt said.

Must-See Player for Hilmar: Broc John Perry, the Yellowjackets’ middle linebacker-running back, seemingly alters himself like an amoeba, such is his whatever-it-takes attitude. Simply, he appears to be everywhere at once. “He exemplifies our team,” coach Frank Marques said. “He’s worked really hard to achieve everything. Whatever he has, he’s going to give it to you every play. He’s literally 100 per cent.” Perry, who weighs only 175 pounds, has scored nine touchdowns in Hilmar’s three playoff victories (three in each game)—six rushing, one receiving, one blocked-punt return and one pick-six. The 36-yard blocked-punt return against Sonora arguably was Hilmar’s most important TD to date. Sonora dominated the first half and limited Hilmar to only 27 net yards while building an 18-7 lead. The Yellowjackets stayed close, however, when Blake Westmoreland caromed the punt high in the air and sideways…and straight to Perry who collected it in mid-air and housed it. Thus energized, Hilmar rallied in the second half to win 35-31.

Must-See Player for Escalon:  Ryker Peters, a stout 190-pound junior, has delivered high-volume hits all season at linebacker. He’s emerged recently, however, as a better-than-good fullback for the streaking Cougars. Last week in the rematch against Ripon, he carried 22 times – his previous high was only 12 – for 143 yards and two touchdowns. The week before against Woodland, Peters rushed for 205 yards and three touchdowns, blocked a punt out of the end zone for a safety and accounted for 12 tackles. “He and his teammates played only three games as a sophomore.  I think that affected his development,” Escalon coach Andrew Beam said. “He was so important to us on defense that we platooned him at fullback until now. …He’s really figuring it out as a fullback.” A hard worker in the weight room, Peters has struck blows on defense that changed nearly every Trans-Valley League game. The Cougars’ first outright TVL title in a decade in part carries Peters’ signature.

Must-See Player for Argonaut: Colby Eckhart, Argonaut’s two-way standout, has earned his reputation as one of the fastest players in the Mother Lode League. The 155-pound senior embodies the Mustangs, the MLL’s smallest school by enrollment (532 students), who always punch above their weight. The MLL runners-up have beaten Liberty Ranch and Livingston, schools twice the size of Argonaut, in the playoffs. Last week against the Wolves, Eckhart took a kickoff and dashed 88 yards for a touchdown en route to a ringing 37-24 victory.  “Colby is a game-breaker. He’s probably had a dozen plays over 70 yards as a running back or receiver,” said Rick Davis, who called Eckhart (881 rushing yards 11 TDs) one of the best running backs he’s had in his 20-year tenure as Argonaut coach. This week, Argonaut takes on Rosemont, which is triple the size of the Jackson school. The Mustangs, section finalists for the first time since they won their only blue banner in 2004, won’t be fazed.

Must-See Player for Le Grand: Fermin Villegas, a bona fide load at 6-2 and 305 pounds, probably is the best-ever lineman at Le Grand. Everything the Bulldogs do rotates around Villegas. On offense, he can roadgrade and also pull to block linebackers. On defense, he commands a double-team every night. It was no surprise why Villegas, a senior, was named the Southern League’s Lineman of the Year. Aaron Martinez, the Le Grand coach, marvels at how Villegas – always the nicest and biggest kid in the room – changes personality on the field. “He flips a switch and becomes what everybody expects him to be. He puts people on their backs,” Martinez said. Le Grand is making its biggest run since it claimed memorable section titles in 2011, ’12, ’13 and ’14. Rick Martinez, Aaron’s brother, served as head coach during those years while Aaron was an assistant.  Rick’s teams were good, but they didn’t a devastating lineman like Villegas. “He’ll never gloat and he’s not animated. He just does his job,” Aaron said.