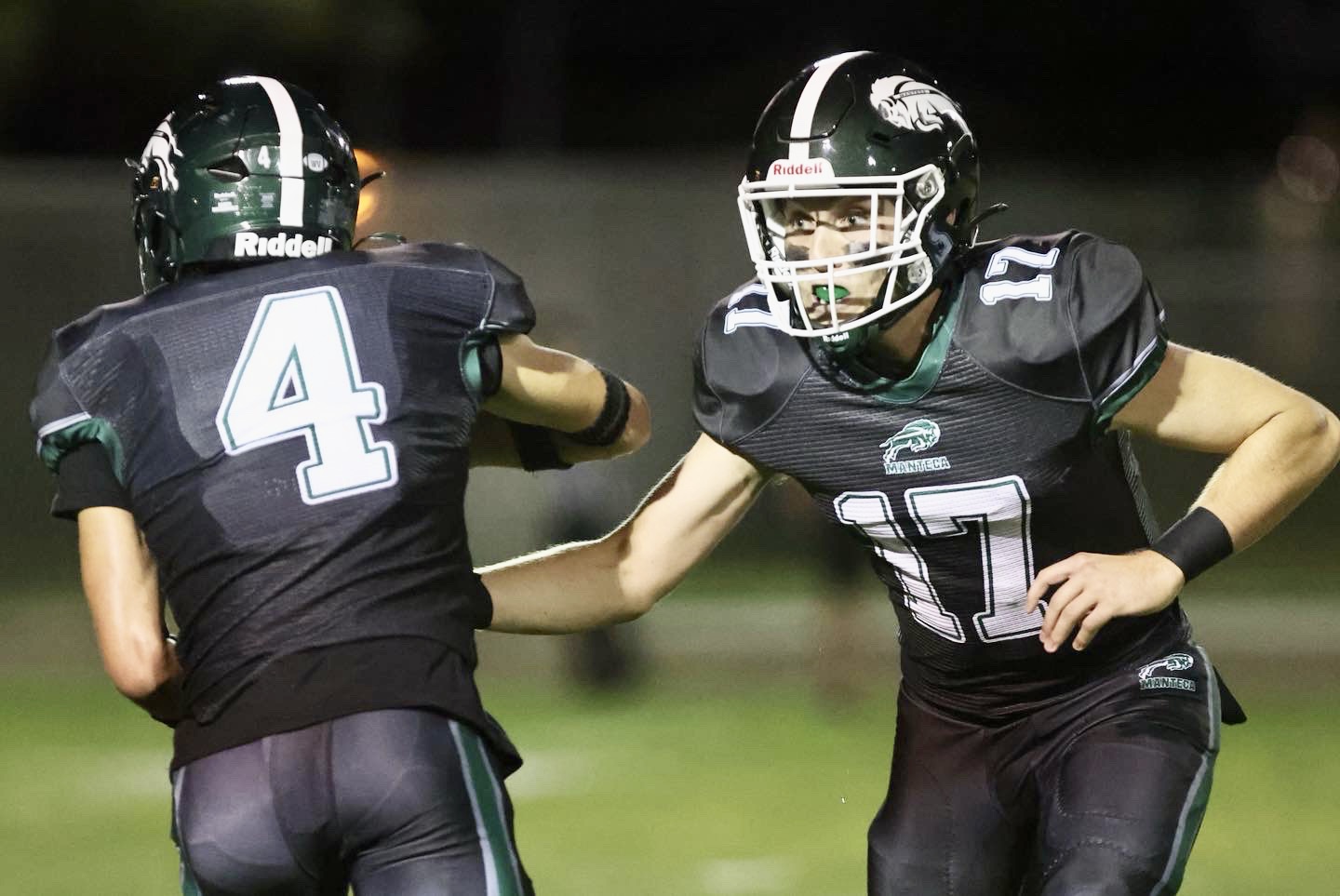 Even with its stars playing a limited role, the season-long string of blowouts continued on Friday evening for Manteca High, the region's top-ranked football team.

The Buffaloes skunked rival Sierra, 68-0, in one of the area's most lopsided contests of the season. A game that began with serious theatrics -- the Western Descendants Motor Club circled the stadium track on their Harley Davidson motorcycles, while the varsity team ran through a chute of fireworks -- finished with a running clock.

Hudson Wyatt tossed three touchdowns, including a spectacular fade into the corner of the end zone to Diego Esparza, who completed the play with a one-handed catch. Florida State-bound athlete Blake Nichelson was used sparingly in the first half, but scored on all three of his touches.

"It was a good win," Wyatt said. "We had some things we wanted to work on and we accomplished those things. We wanted to get the passing game going and we didn't let them score a point, which is always good."

Manteca is now 6-0 and 2-0 in the Valley Oak League. Its high-powered offense, led by Nichelson, a preseason all-state selection and four-star prospect, has scored 43 or more points in each game. Friday could have been much worse if not for a running clock. The Buffaloes led 33-0 after the first quarter, 54-0 at halftime and then pulled its starters early in the third quarter.

Meanwhile, across the field, a former CIF State champion has fallen on hard times.

Sierra is now 1-6 and 0-2, and seemingly stuck in rebuild mode. Since stunning Oakdale in the 2019 Sac-Joaquin Section Division III final and closing with an 11-win season, the Timberwolves have won just three games.

The rivalry has been anything but that in recent years. Manteca has won the last 10 meetings with an average scoring differential of 41 points per game.Sierra's last victory against the Buffaloes came in 2012. Since then, Manteca has averaged 50 points per game in a decade of dominance.

Nothing changed on Friday night, even with Nichelson's reduced workload. The Florida State-commit was used sparingly in the rout, a precautionary measure by Varnum and his staff with pivotal Valley Oak League games looming.

Manteca completes its rivalry tour next week at East Union, which hung with Oakdale for three quarters, before closing the VOL season with home dates against Central Catholic (Oct. 21) and Oakdale (Oct. 28), games that will ultimately decide the league crown and top seeding in the Sac-Joaquin Section Division II and III playoffs.

Manteca coach Mark Varnum feels good about where his team is heading into the home stretch of the league calendar.

"We're 6-0 and it hasn't even been close yet," he said. "We have to stay healthy and play at our level, and teams have to worry about beating us."

Wyatt connected on three straight passes to Esparza, setting up Davis' scoring run to make it 33-0 after the first quarter.

Landon Chamberlain (48-yard run), Chris Chavez (58-yard punt return) and Garrison Reis (15-yard reception) completed the scoring. All of Nichelson's touchdowns came in the first quarter. He reversed course on a 58-yard punt return, plowing through a pack of Timberwolves at the goal line. On the next possession, he glided into the end zone with ease on an 18-yard pitch. And then he capped his night with a 33-yard reception from Wyatt, who didn't flinch after seeing Sierra in single coverage.

"It was about giving dudes opportunities," Varnum said. "Diego had a huge game tonight. Kaden MacDannald had another big one after last week. Garrison Reis had a touchdown. Hudson threw the ball more tonight than he has all season. We gave guys chances, they stepped up and made the most of it."

The win wasn't without a loss for the Buffaloes, who saw their captain Alijah Cota helped off the field with an apparent shoulder injury. The returning all-VOL middle linebacker had two sacks in the first quarter and appeared to injure his shoulder chasing Sierra quarterback Tim Sarginson in the second quarter.