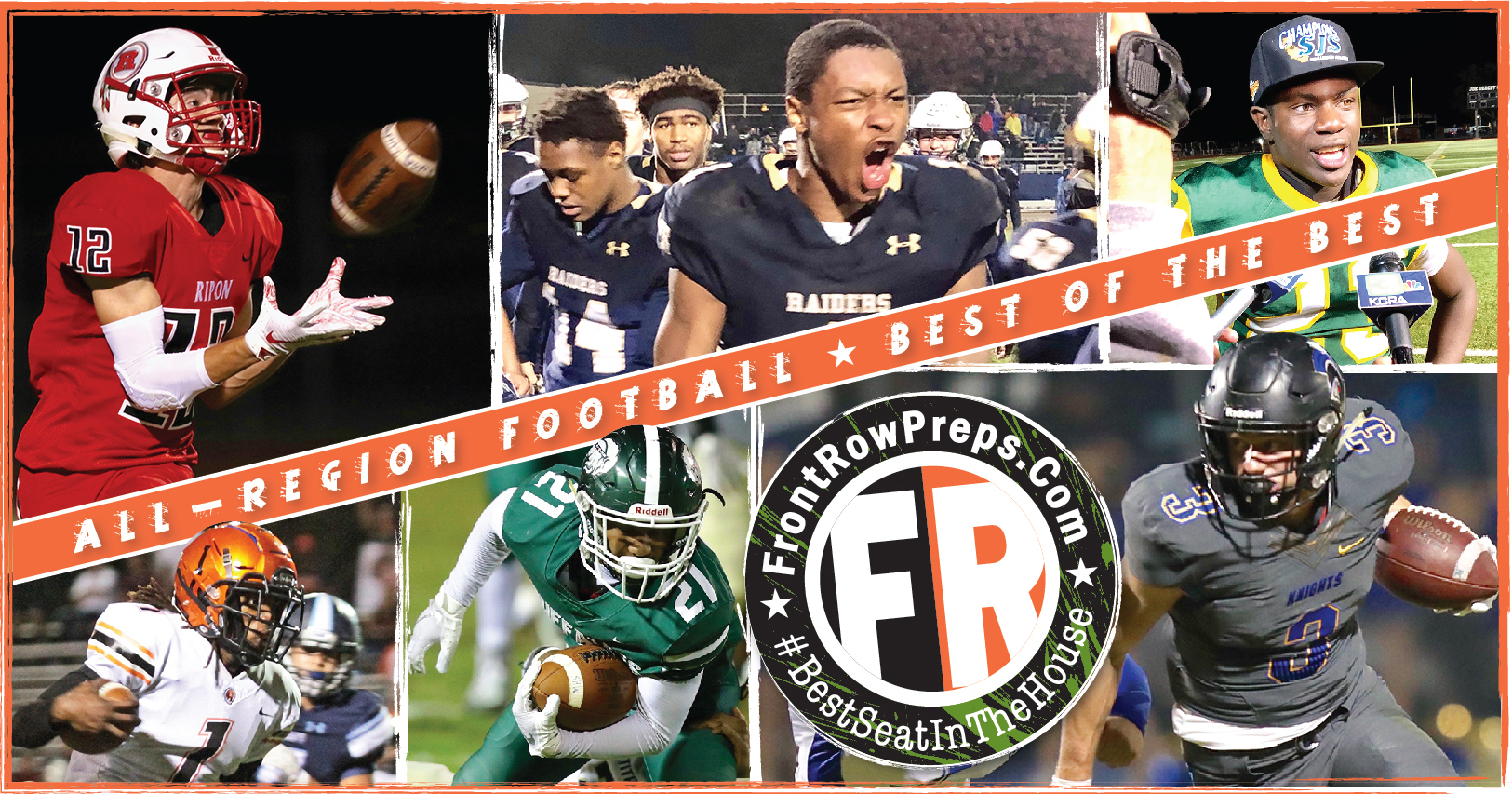 60 named to the FrontRowPreps.com All-Region teams. Who made it and why.

On Thursday, Dec. 27, FrontRowPreps.com announced its inaugural Coaches of the Year, Hilmar's Frank Marques and Denair's Anthony Armas, both whom engineered CIF State championship runs. And now, without further ado, we present the All-Region large- and small-school football teams, a collection of 60 players from throughout the southern half of the Sac-Joaquin Section.

On Saturday, Dec. 29, we'll unveil the Player of the Year.

RB — Trabron Russell, Manteca: Only a junior, Russell rushed for a career-high 1,320 yards and 18 touchdowns in just 10 games, averaging nearly 8 yards per carry.

RB — Dawaiian McNeely, Central Catholic: McNeely was named the Valley Oak League’s co-Offensive Player of the Year after rushing for 1,073 yards and 10 touchdowns; his 80-yard touchdown run triggered the Raiders’ come-from-behind victory over Inderkum in the playoffs.

OL — Jackson Betz, Downey: The 6-foot-4 center anchored the Knights’ offensive line and is fielding Division I offers for his ability to run and pass block.

OL — Eric Soares, Central Catholic: After transferring from Modesto High, Soares is the only offensive lineman in the region to be named to the all-Modesto Metro Conference and all-VOL first teams.

OL — Clifford Johnson, Merced: The Central California Conference’s Offensive Lineman of the Year was the unsung hero in the Bears’ explosive offense; a third-year starter whose absence was felt in Merced’s playoff loss.

OL — Michael Jeffus, Turlock: The 6-foot guard was named the CCAL’s Offensive Lineman of the Year, and he was a big reason the Bulldogs amassed nearly 5,000 yards of total offense.

OL — Everett Johnson, Turlock: The 6-foot-8 left tackle has verbally committed to Cal and it’s no wonder why major Division I coaches drool over his game film. Johnson is athletic and aggressive, and he embraces the physical demands of the position.

WR — Xaver Stewart, Merced: The CCC’s Best Offensive Player had at least one touchdown reception in every game and finished with 843 receiving yards and 14 scores.

WR — Anderson Grover, Downey: Grover was named the CCAL’s Outstanding Offensive Player after reeling in 74 receptions for 1,164 yards and 15 touchdowns.

WR — Jacob DeJesus, Manteca: Only 5-foot-6, DeJesus embodies the motto, “Heart over height.” He was named the VOL’s co-Offensive Player of the Year after racking 843 receiving yards, 542 rushing yards and 20 total TDs.

ALL-PURPOSE — Payton Bass, Pitman: The CCAL’s co-Outstanding Back was a threat in all three phases, but proved nearly unstoppable as a sure-handed running back. Bass had 936 rushing yards and 535 receiving yards.

DL — Boss Foumai, Patterson: Only a sophomore, Foumai was named the Central California Conference’s top defensive lineman. He starred on both sides of the ball for the Tigers, along with brother Logan Foumai.

DL — Caleb Kuppens, Oakdale: Kuppens was named the Valley Oak League’s Utility Player of the Year for his speed and tenacity out of the backfield as a running back and off the edge, where he terrorized QBs as a defensive end.

LB — Matt Robinson, Pitman: The 6-foot, 185-pound inside linebacker earned a share of the CCAL’s Outstanding Linebacker award after starring for a defense that gave up just 55 points in its first four league games.

DB — Trey Longstreth, Gregori: Longstreth was named the CCAL’s co-Outstanding Offensive Back/Receiver, Special Teams Player of the Year and appeared on the first team as a wide receiver and defensive back.

DB — Adrian Cuevas, Central Catholic: The hard-hitting, all-conference safety tied for the team lead with 67 tackles. He also had one interception and forced a fumble.

DB — Dhameer Warren, Merced: The Central California Conference MVP did it all for the Bears, including rove the secondary. Warren, who is fielding interest from Arizona, had three interceptions, to go along with 1,559 yards of total offense.

K — Adrian Melesio, Patterson: In a region rich with kicking talent, Melesio was the most productive. He connected on 11 of his 15 field goal attempts, including a school-record 54-yard boot against Modesto.

QB — Ryan Daggett, Ripon: The Trans-Valley League’s Outstanding Offensive Player completed 67 percent of his passes for 1,127 yards and 13 touchdowns, and then gutted defenses with his feet. He rushed for a team-high 743 yards and 11 TDs.

QB — Michael Vivo, Waterford: Vivo was a one-man wrecking crew, decimating defenses and destroying dreams. He passed for nearly 2,000 yards, connecting on 21 touchdowns, and led the Wildcats with 1,120 rushing yards and 14 touchdowns.

RB — Javyn Drobnick, Big Valley Christian: Drobnick led the region in rushing with 2,211 yards, joining an elite class that stretches back through the decades. Drobnick is the 16th member of the 2,000-yard club and will have one more season to take aim at the single-season rushing record (2,851) set by Oakdale’s Will Semone.

RB — Isaac Sharp, Hilmar: The TVL’s Outstanding Offensive Back totaled 2,105 yards of offense, including 1,687 on the ground, and 32 touchdowns. He topped 100 yards eight times with a season-high 222 against Sonora.

OL — Wyatt Van Vliet, Ripon Christian: A two-way starter, Van Vliet was named to the all-Southern League team as an offensive lineman. Defensively, he also had 113 tackles, second only to Dale Fisher (136).

OL — Carlo Morales, Denair: The Southern League’s Offensive Lineman of the Year, Morales helped pave the way for one of the southern section’s top ground attacks.

WR — Tyler Vargas, Orestimba: Vargas led the Sac-Joaquin Section in receiving yards with 1,458 yards on 87 receptions. He also had 20 touchdowns and earned a share of the Southern League’s co-Offensive Player of the Year award.

WR — Evan Bearden, Sonora: Despite a nagging foot injury that hampered him at the start, Bearden’s return coincided with the Wildcats’ dramatic turnaround. Bearden, who has committed to UC Davis, was named league MVP as Sonora captured its fifth straight Mother Lode League title.

ALL-PURPOSE — Steffin Winston, Denair: An all-Southern League performer, Winston was the Coyotes’ top rusher and an impact player on the defensive side of the ball. He rushed for 141 yards and two touchdowns in the CIF State Division VII-AA Bowl.

DL — Xavier Carlton, Modesto Christian: The TVL’s Outstanding Defensive Lineman had 81 tackles, 6.5 sacks and three fumble recoveries. Carlton also made one of the season’s biggest catches — a game-winning snag between two Escalon defenders … from his back.

DL — Drew Van Vliet, Ripon Christian: The Southern League MVP was a force to be reckoned with in the trenches, amassing 103 tackles, including 29.5 for a loss, and 11 sacks for one of the section’s top scoring defenses.

LB — Ryan Leonard, Mariposa: Leonard averaged 16.3 tackles per game and finished third in the section with 147 stops, despite only playing nine games. In three varsity seasons, the SL’s Defensive Player of the Year never had fewer than 124 tackles.

LB — Isaac Schinmann, Modesto Christian: His value to a team isn’t defined by statistics. Without a doubt one of the toughest players in the southern half of the section, Schinmann had 49 tackles, two interceptions, 1,061 yards of total offense and 10 touchdowns.

LB — Justin Rentfro, Hilmar: The TVL’s co-Outstanding Linebacker hit so hard that he bent his facemask making a tackle in the CIF State Division VI-AA Bowl. A two-way talent, Rentfro averaged nearly as many tackles per game (8.7) and he did yards per carry (9.5).

DB — Sean McGovern, Ripon Christian: McGovern shined in the secondary for the Knights, finishing with 107 tackles, four interceptions and five fumble recoveries. He returned three of those fumbles for scores.

DB — Jose Hernandez, Modesto Christian: Hernandez (46 tackles, two interceptions) captained one of the top scoring defenses in the section from his safety position and was named the TVL’s Outstanding Defensive Back. Suffered a season-ending knee injury in the Division VI quarterfinal, leaving the Crusaders without a two-way catalyst.

DB — Kaden Christensen, Escalon: The do-it-all junior led the Cougars in rushing (810) and all-purpose yards (1,351), yet the all-TVL performer still had enough energy and wind to anchor the secondary. His four interceptions were also tops on the team.

DB — Nico Ilardi, Ripon: An all-TVL first-team selection as a defensive back and punter, Ilardi, Ripon’s jack of all trades, had two interceptions and 30 tackles.