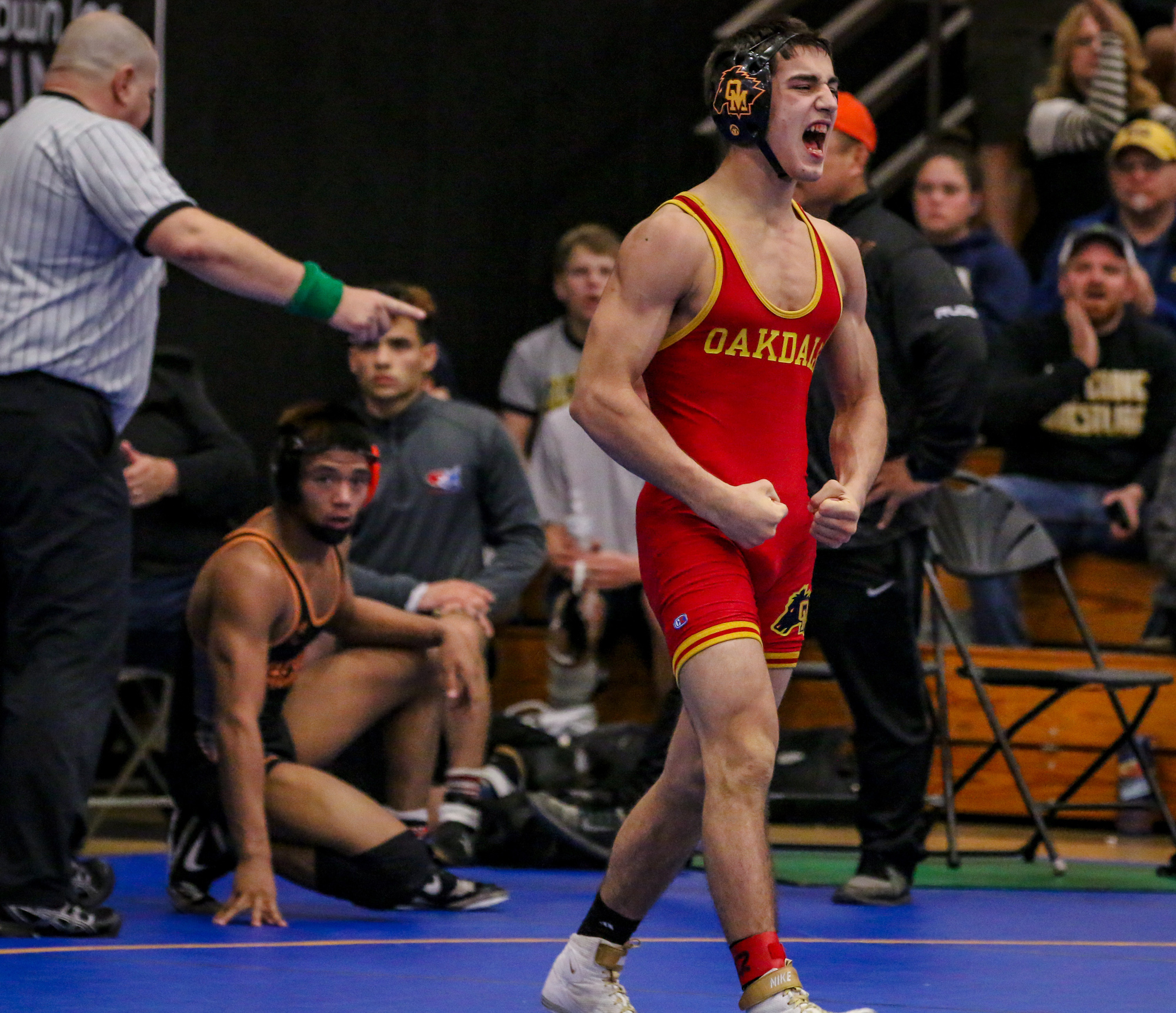 STOCKTON – All Kyle Porter wants for his son is to be his own wrestler.

Don’t be intimidated by Dad’s legacy, warns the father. Be your own man, of course, and establish our own identity, on the mat and off.

“He’s making the transition from being my son to being his own wrestler,” Kyle Porter said. “He’s owning what he does on the mat. He owns it now.”

Henry Porter, the son, set his own course Saturday at the Sac-Joaquin Section Masters Championships. He’s heard his entire life about his father’s twin state titles for Hughson (1991 and ’92), and the son knows in his heart he can answer.

Porter, the Oakdale sophomore armed with all that wrestling lineage, is filling his own trophy case. The 2018 state finalist claimed his first Masters title (132) after arguably the day’s most thrilling final, an 8-6 stress test in overtime over Patterson senior Noah Mirelez.

Mirelez and Porter split two matches this season, and the tie-breaker produced even more excitement. Porter led 5-1 before Mirelez countered and drew even 6-6 with 16 seconds left in the third round. Porter’s eventual takedown decided everything, though mutual respect already was achieved.

“Noah is a good competitor and a nice kid,” Porter said. He’s a strong guy, a little light for his weight. We had a great match.”

Wrestling runs in Porter’s blood on both sides of his family. Doug Porter, Kyle’s father, coached Hughson through its 1990s dynasty which featured another two-time state champ – current Oakdale coach Steve Strange. To top if off, Aaron Porter, an uncle, was a state medalist.

Henry said the best advice he ever received from his father was to “stay calm and wrestle your match. Attack and keep moving and wrestle through every position.”

Today, Strange orchestrates a powerful Oakdale program which bows to only one team in the section – Vacaville. The Mustangs totaled a school-record 222 points, far more than they collected while winning in 2011, and vaulted Porter and seniors Rickey Torres (138), Gabe Martinez (170) and Cody Golding (195) to the top of the podium. That 222 would have won all but two Masters titles since 2005. The Oakdale contingent, located near the top of the bleachers at Delta College's Blanchard Gym, jumped to their feet when Torres pinned Elk Grove's Kendall Frank in only 1:06.

Nevertheless, Oakdale settled for runner-up honors behind Vacaville with a section-record 262. The Bulldogs, led by champions T.J. Ruiz and Tyee Ducharme (152), built a first-day lead and rode lethal depth to their 10th Masters title in the last 13 years.

“The first day was almost a perfect day for us, and we were still down,” said Strange, who watched eight of his wrestlers reach the semifinals (they went 5-3). “It’s tough treading in this meet.”

Oakdale will send nine of the area’s 28 qualifiers to the CIF State Championships next Thursday through Saturday at Bakersfield’s Rabobank Arena.

The section’s best sweated and toiled for about 16 hours spread over two days at Delta.  After all that hard work, the top six in each weight class will advance to Bakersfield.

Aside from Oakdale, the city of Turlock rose to section prominence. Turlock High and Pitman each annexed two champions – Izzy Tubera (113) and Sammy Silveria (145) for the Pride, and Adrian Heras (126) and heavyweight Michael Jeffus for the Bulldogs.

Jeffus, in another tie-breaker showdown, burnished his impressive credentials by edging Vista del Lago’s Justin Ramos 3-2 for the title. That gives Jeffus a 3-2 lead over his rival. The win also lifted Turlock to a sixth-place finish, five points better than seventh-place Pitman. El Capitan of Merced placed 10th.

Earning berths in the finals only to be beaten were Oakdale’s Seth Borba (145), Pitman’s Kendall LaRosa (160) and Donovan Giangregorio of Calaveras (170).

For the Porters, they’ll again gather in Bakersfield and root on the latest family star. The father no doubt sees a little of himself in Henry.

“He puts in a lot of work and trusts the process,” Kyle Porter said. “It’s nice to see the benefits come.”