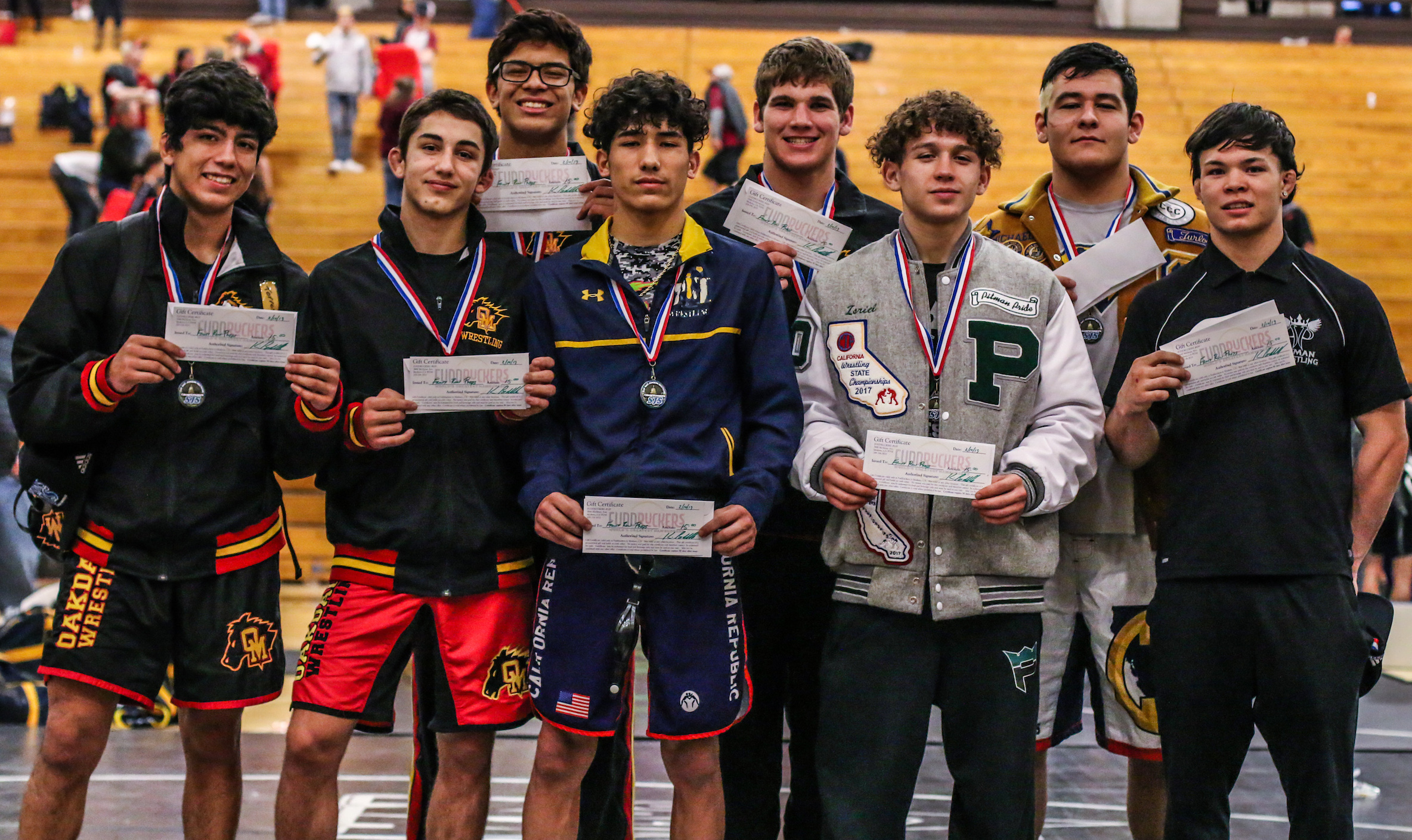 Best of the Best: All-Region boys and girls wrestling teams

The historic 2018-19 high school wrestling season has ended, and the area celebrates state champions Michael Jeffus of Turlock and Lilly Freitas of Pitman.

Both titles are milestones. Jeffus, a senior heavyweight, became Turlock’s first state winner since Lewis Gonzalez’s memorable 2004-05 double.  He also was the Sac-Joaquin Section’s first male champion since 2015 and one of only three from Northern California to take home titles this year.

The unbeaten Freitas, a freshman, claimed Pitman’s first state title. Conversely to the boys, she was one of nine NorCal girls to be crowned champions.

The area’s Coach of the Year is Big Valley Christian’s Matt Ippolito, who built the Lions in five years from a struggling program to the Sac-Joaquin Section Division 6 Dual-Meet champion. BVC earned its first-ever win over Mariposa for the title.

106: Amelia Velazquez, sophomore, Gregori (41-10) – A promising season ended with a 3-2 record at state and a tough 2-0 loss in the state blood round (the winners of this round clinch state medals while the loser is eliminated). Until then, Velazquez won the regional title among other honors.

111: Mikayla Vega, senior, Escalon (42-5) – Vega, fifth in the state at 106 last year, improved on that with an impressive run to the state final. The regional champion became only the third Escalon wrestler to qualify for state four times.

116: Sara Fernandez, sophomore, Los Banos (26-9) – Fernandez finished 1-2 at state after placing third at Masters. She also won a tournament at Firebaugh and was third at Inderkum. The 116s were the only weight class from the area not to qualify a wrestler for state.

121: Julia Casillas, junior, Escalon (38-9) – Casillas, 0-2 at state, made a spirited run to the Masters final. She qualified for the Stockton meet by winning the regional title.

126: Serenity Angeles, senior, Downey – Angeles was winless at Bakersfield after a busy two-day run at Masters. She went 4-2 at Masters for fifth place. Angeles placed fifth at the regional.

131: Carla Martinez, junior, Central Valley (24-14) – Martinez, one of the area’s four state qualifiers, did not win at Bakersfield but was a runner-up at Masters. She was third at the regional.

137: Faalia Martinez, junior, Oakdale (36-4) – Martinez, a state semifinalist, overcame her only loss in six matches and placed third. She is the first female Oakdale state medalist. Her confidence soared after she reached the Masters final.

143: Lilly Freitas, freshman, Pitman (33-0) – Freitas compiled the most dominant season, male or female, in recent history in the area. Twenty-nine of her wins came by fall, two by tech and two by major. The Masters and divisional champ finished it by pinning top-seeded Gianna Anaya of San Fernando in 54 seconds.

150: Brianna Quiroz, senior, Central Valley (26-9) – Quiroz, who qualified for state two straight years, improved this year by going 1-2 at Bakersfield. She led her team to back-to-back league titles, won the regional title and was runner-up at Masters.

160: Alexa Garcia, junior, Sierra (38-5) – Garcia, 2-2 at state a year ago, improved this year by reaching the semifinals before she finished on the podium in sixth. The school’s first state medalist was the Masters runner-up and regional champion. She lost only to state medalists.

170: Liliana Vergara, senior, Gregori (30-2) – Vergara, a state finalist in 2018, was unbeaten as a senior until her loss in the semifinals to eventual champion Alia Abushi of Arroyo. She eventually placed fourth, the third state medal for the four-time state qualifier.

189: Valerie Osborne, junior, Oakdale (26-7) – Osborne went a respectable 2-2 at Bakersfield after her 4-1 third-place showing at Masters. The week before, she was the regional champion.

235: Tagivale Vaifale, senior, Pacheco (16-2) – Vaifale, fourth at state in 2018, improved to third with a 5-1 performance. The only blemish was a semifinal loss to eventual champion Tavi Heidelberk of McClatchy, who also beat Vaifale at the Masters final. Vaifale, unable to make weight until late in the season, was the regional champion.

106: Brayden Abell, sophomore, Oakdale (47-6) – Abell, 5-2 at state for fourth, was teched in the semifinals by eventual champion Richard Figueroa of Selma. He also placed third at Masters and was the section D-III champion.

113: Izzy Tubera, junior Pitman (31-4) – Tubera earned his second state medal by going 5-1 for third place. His only loss at 113s this year came against the eventual state runner-up in the semifinals.  Tubera gained momentum with titles at the D-III and Masters.

120: Clayton Bashor, sophomore, Oakdale (42-12) – Bashor, a two-time state qualifier, went 2-2 after he overcame a loss via fall in his opening match to eventual champion Maximo Renteria of Buchanan. He placed fourth at Masters and was the D-III champion.

126: Adrian Heras, junior, Turlock (45-9) – Heras was 3-2 at state and lost in the blood round to the eventual third-place finisher.  He advanced to Bakersfield by winning the Masters and D-III titles.

132: Henry Porter, sophomore, Oakdale (32-6) – Porter, a state finalist as a freshman, went 7-1 and worked hard for his third-place medal. He bounced back after dropping a close and disputed match in the quarterfinals. Porter, among the state’s top-ranked wrestlers all season, was the Masters and D-III champ.

138: Ricky Torres, senior, Oakdale (36-8) – Torres, 3-2 at state, came home without a medal after a loss to the eventual fourth-place finisher. One of the mainstays to Oakdale’s powerhouse team (10th in the state) was the Masters and D-III champ.

160: Kendall LaRosa, junior, Pitman (28-3) – LaRosa was 2-2 at state and was beaten by the eventual third-place medalist.  His only three losses came at Bakersfield and the Masters final. LaRosa was the D-II champ.

170: Gabe Martinez, senior, Oakdale (45-8) – Martinez, a state finalist as a junior, capped a strong career by going 4-3 for an eighth-place medal. The four-time state qualifier, a two-time Masters champion, was the D-III champ.

182: Donivan Giangregorio, sophomore, Calaveras (38-6) –Giangregorio was 1-2 at Bakersfield after he reached the Masters final. He was the D-V and Mother Lode League champ.

220: Justin Rentfro, senior, Hilmar (29-3) – Rentfro was 2-2 at state, but his two losses were defaults due to an ankle injury incurred during his second-round win (he scored the decisive three points post-injury).  The Hilmar football star placed third at Masters after he won D-V.

285: Michael Jeffus, senior, Turlock (40-3) – Jeffus, fifth at state a year ago, won all five matches at Bakersfield by decision, climaxed by a 3-2 win over top-seeded Nicholas Villarreal of Gilroy. Jeffus, the Masters and D-II champion, never was ranked No. 1 in the state until the end.