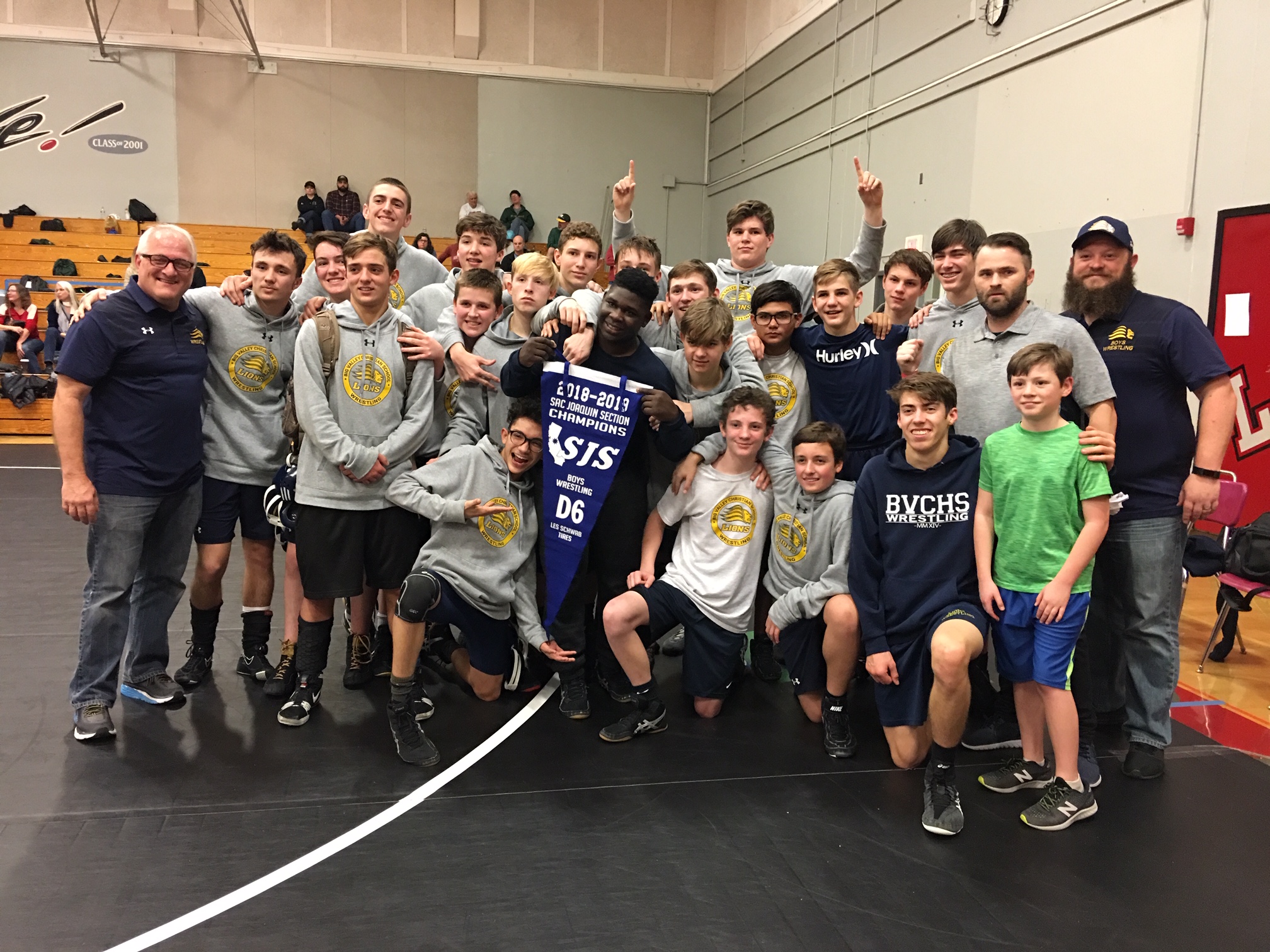 STOCKTON – Season after season, the Oakdale High wrestlers wear a simple no-frills singlet — only a few stripes and a lot of Oakdale red.

The Mustangs prefer fight, talent and a voracious hunger to win over sartorial appearance. The Sac-Joaquin Section Team Dual Championships, held Saturday at Lincoln, has become an annual Oakdale showcase.

True to form, Oakdale dominated Division 2, closing with a 47-23 victory in the title match over a good Pitman lineup. It was the Mustangs’ section-record 11th straight Team Dual title, an amazing run even after throwing in their 13 straight Valley Oak championships.

“The boys wrestled well today,” said Oakdale coach Steve Strange in a straight-forward assessment befitting the Oakdale style. “It wasn’t surprising, but we knew we had to wrestle well.”

Oakdale hardly broke into a sweat to reach the D-2 final, advancing with a forfeit win over Oakmont and a 69-3 trouncing over Bella Vista. Then came Pitman, the Pride-proud Central California Athletic League champion which has placed first or second here six of the last nine years.

Pitman’s Izzy Tubera (122), ranked first in the section and sixth in the state, opened with a decision. After that, it was all Oakdale and it happened fast.

Porter, a sophomore who’s ranked third in the section and fourth in the state after he reached the state finals as a freshman, showed off his relentless style against Pitman’s Nolan Lok. The Oakdale star, giving up escape points, scored takedown after takedown and piled on the points to win 21-6.

“I’m working hard for the postseason,” Porter said. “Everybody is gunning for me. I just go out there and wrestle my matches. I feel this is one of our best teams.”

Oakdale is ranked 10th in the state by The California Wrestler and has been a regular in the top 10 all season.  Pitman no doubt would agree.

“We gave away a couple of early matches and that hurt us,” Pitman coach Adam Vasconcellos said. “I’m very proud of my team. We’re starting to establish a legacy.”

Big Valley Christian made school history with its 45-33 win over Mariposa. That avenged a tough 42-39 loss to the Grizzlies two weeks ago. In fact, Mariposa turned back Big Valley in the 2017 D-6 final.

That made BVC’s victory extra-sweet. Further, the Lions never before had beaten Mariposa. An 8-3 decision by the Lions’ 220-pounder Javyn Drobnick proved pivotal.

“I knew you had it in you,” coach Matt Ippolito exclaimed to his team. “You didn’t deserve it. You earned it!

'“I didn’t inherit a bad team, that’s for sure,” Upchurch said.

Turlock, the CCAL runner-up behind Pitman, made its presence felt in D-1. The Bulldogs eliminated Franklin of Elk Grove 42-28 before they were barely beaten by Elk Grove 33-29. Vacaville, the eventual champion, rolled past the Herd in the final 48-15.

“We were so close to winning,” Turlock coach Mike Contreras said. “We wouldn’t have beaten Vacaville, anyway, but we nearly got there.”

In D-3, Golden Valley stayed alive with a 60-18 win over Rio Americano. The Cougars were defeated by Ponderosa 48-22 in the semifinals.  El Capitan, the Central California Conference champion,  overwhelmed Stagg 67-9 but was beaten by eventual winner Vista del Lago in the semifinals 38-24.

Ron Agostini was recognized for regional and national awards over his 40-year career as a sports writer and columnist for The Modesto Bee. He retired in 2017.