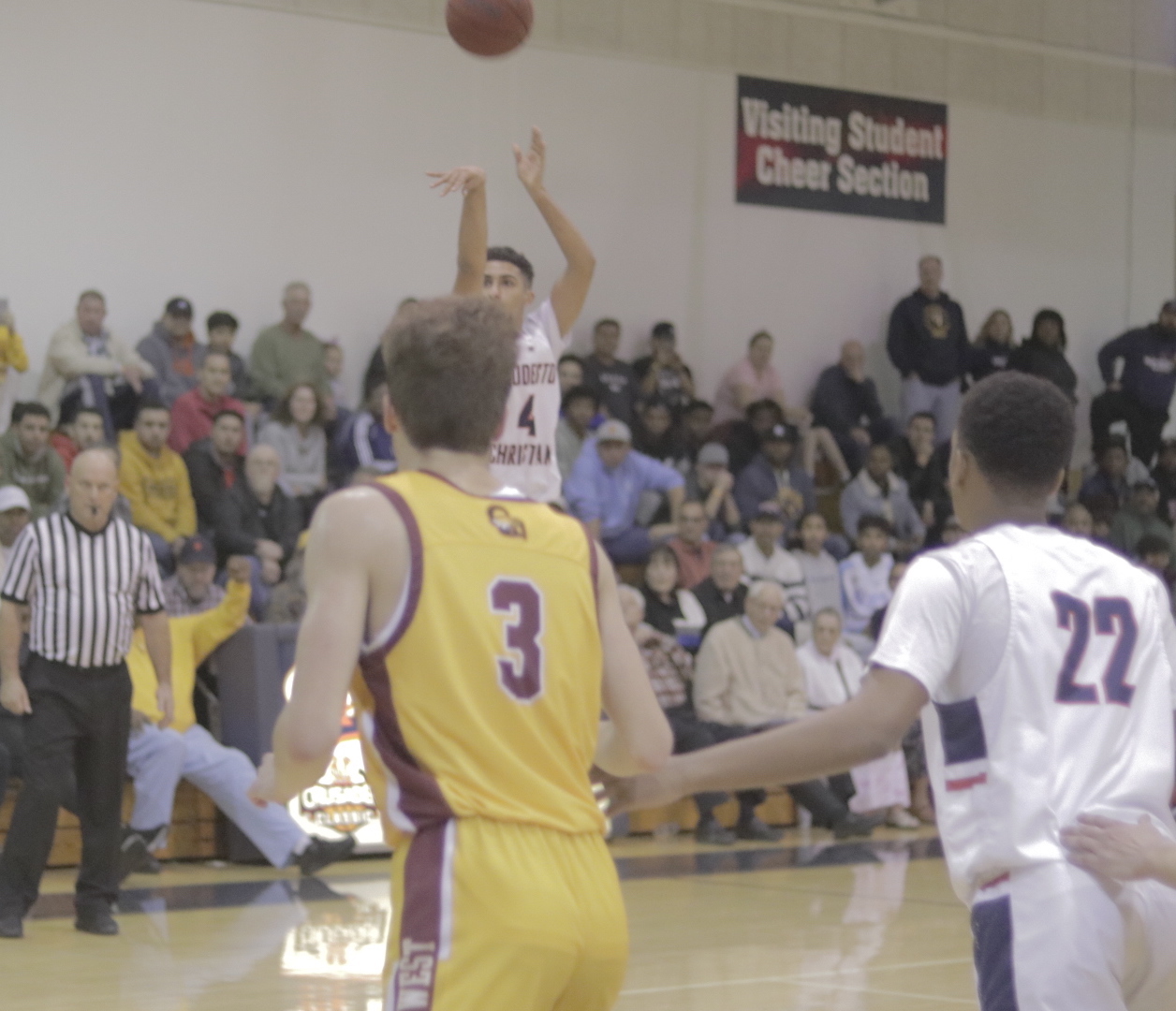 Baljot Sahi fires a 3-pointer that puts Modesto Christian ahead by two points with seconds to play in its 56-55 win over Clovis West in the semifinal of the 20th annual Holiday Hoop Classic on Saturday, Dec. 28, 2019, in Salida, Calif. (Photo courtesy Modesto Christian Basketball)

SALIDA — One topic and one topic only — The Block — dominated conversation in the hospitality room at the 20th annual Holiday Hoop Classic following Modesto Christian’s 56-55 win over Clovis West in a semifinal matchup.

It has to be called a block, of course, since none of the three officials called it a goal tend.

With 6 seconds to play and the host Crusaders holding a 56-55 lead, courtesy of Baljot Sahi’s 3-pointer with 17 seconds left, the Golden Eagles inbounded the ball for a chance to win the game. Everybody in the gym knew the ball was going to Cole Anderson, Clovis West’s highly recruited 6-foot-3 junior guard.

And nobody was wrong.

Junior guard Ryan Vang inbounded the ball and found Anderson streaking through the key, with MC freshman Trey Moreland on his hip. But Anderson has 8 inches on Moreland and 6-5 junior forward Jaden Phillips left his man and slid over to assist.

Anderson took Vang’s bounce pass on the block and immediately hoisted a layup. But Phillips leaped high into the air and blocked the attempt, which he corralled himself and then drew a foul.

Phillips missed the front end of a one-and-one, and Clovis West’s desperation attempt at the buzzer was off the mark.

So, was it a goal tend? Depends on whom you ask, naturally, though much of the conversation in the hospitality room skewed toward it being an illegal block.

“Nah, it was not a goal tend,” said Phillips afterward, smiling like a cat who swallowed the proverbial canary. “It was perfect timing.”

In preseason tournaments such as the Classic, teams want to win every game, but being tested, gaining experience and learning about your team is the goal of most every coach. Goal tend or not, MC coach Brice Fantazia was pleased that his player did exactly what he’d been coached to do.

“It was a great play by Jaden,” said Fantazia, who will try to lead the Crusaders to their first Classic title since 2015 and just the fifth overall in tournament history. “Sliding over to help, that’s what we work on. I don’t know if it was a goal tend, but he got up. That’s a big-time block if it was clean.”

On the other side, Golden Eagles coach Vance Walberg saw his squad do exactly what it had been coached to do — get the ball in Anderson’s hand with a chance to win the game, and the inbounds play was executed the way it was drawn up in the huddle.

“The ball was going in,” said Walberg, whose team will play defending champ Weston Ranch Monday at 6 p.m. for third place. “And if you want to get technical, he was fouled on it, too. But, hey, we did enough goofy things to put ourselves in a bad position."

Clovis West hit just one of 14 attempts from three-point range and scored just seven points in the third quarter. The Crusaders opened up a 45-38 lead early in the fourth, but CW battled back and took the lead on Anderson’s jumper that made it 49-48 with 4:53 remaining. The teams traded hoops for the remainder of the stanza, but the Golden Eagles moved ahead 55-53 on another Anderson bucket with 90 ticks left. Anderson (26 points) missed an open 12-footer 45 seconds later that would’ve made it a two-two-possession game and MC took advantage when Sahi nailed his trey with 17 seconds to go.

“My main goal was just to get Alex (Merkviladze) open,” said Sahi, who finished the game with 11 points. “That was my first option, but they helped off me and let me open. No hesitation. It felt perfect. It felt great.”

Funny … there wasn’t a mention of the three-pointer in the hospitality room.

CAMPOLINDO 66, WESTON RANCH 42 — There will no repeat for the Cougars of Weston Ranch. The defending Holiday Hoop Classic champs were defeated in the semifinal round and will play Clovis West on Monday at 6 p.m. for third place. The Cougars were held to just 15 points in the second half.

CLOVIS EAST 72, BROOKSIDE CHRISTIAN 56 — The Timberwolves got 30 points from 6-2 senior guard Jermal Pittman and was the lone player on his team to score in double figures. For BC, 6-2 junior guard Geronimo De La Rosa finished with 20, while 6-7 senior forward Ronnie Ray totaled 15 and 5-11 sophomore guard Lito Pabalate chipped in with 11. Clovis East will play Monday at 3 p.m. against Vanden for fifth place, while the Knights will face off against James Logan at 1:30 for seventh place.

VANDEN 70, JAMES LOGAN 69 — The Colts played without highly recruited point guard Brah’jon Thompson, who entered the tournament averaging 24 points per game, and still had a shot at the buzzer to win the game. Thompson jammed the pinky on his shooting hand in Friday’s game. Makaio Mims (18 points), Ryan Noriega (17) and Coby Hawkins (16) picked up the slack. For Vanden, 6-5 senior wing Teiano Hardee had 18,, while 5-10 senior guard I’saac Montgomery added 16 and 6-6 sophomore wing Takei Emerson-Hardy totaled 13. The Vikes will play Clovis East Monday at 3 p.m. for fifth place, while the Colts face Brookside Christian at 1:30 for seventh.

GREGORI 76, LIBERTY RANCH 66 — The Jaguars got a game-high 31 points from Luke McClellan, a 6-3 senior swing man, and 18 points from 5-10 sophomore guard Javonte Allen. Liberty Ranch, which fell to Sonora in last year’s Sac-Joaquin Section Division IV final and avenged that loss with an 86-83 overtime win on Friday night, had four players finish in double-figure scoring. Jalen Patterson, a 6-1 senior guard, scored 24, 6-0 sophomore guard Gavin Martinez totaled 16, 5-10 junior guard Max Oliver had 11 and 6-2 junior guard Branson McLelland finished with 10. Gregori will play for the consolation championship on Monday at 4:30 p.m. against Bullard, while Liberty Ranch plays for 11th place on Monday at noon against Manteca.
BULLARD 67, MANTECA 53 — Six-foot-4 junior swing man Omarion Thomas-Marshall scored 24 points and teammate Tyric Herod, a 6-0 sophomore guard, added 16 as the Knights advanced to the consolation championship, where they’ll face Gregori on Monday at 4:30 p.m. Manteca, which got 24 points from 6-2 senior forward Jordan Burciaga and 12 from 6-4 juni9or forward Nick Bell, will play for 11th place against Liberty Ranch at noon on Monday.

‍TURLOCK 57, BEYER 35 — The Bulldogs got their first victory of the tournament, turning in a solid defensive effort against the Patriots. Cameron Walker, a 5-foot-10 junior guard, led Turlock with 12 points, while 5-10 sophomore guard Joseph Richmond paced Beyer with 14. The Bulldogs will play Sonora for 13th place on Monday at 10:30 a.m., while the Pats will take on Ripon at 9 a.m. on Monday for 15th.

SONORA 75, RIPON 42 — The defending Sac-Joaquin Section Division IV champions proved they’re much more than a one-man band, getting 20 points from 5-10 senior point guard Jonathan Mayben and 13 from 6-0 sophomore point guard Callahan Hanson. Sonora standout Austin Patterson, a highly recruited 6-3 senior, played sparingly and scored just four points. The Indians had three players score in double figures, getting 13 from 5-11 junior guard Malik Taylor, 11 from 5-9 senior guard Dorian Dougherty and 10 from 6-3 senior forward Troy Brogan. The Wildcats take on Turlock on Monday at 10:30 a.m. for 13th place in the tourney, while Ripon squares off against Beyer for 15th place at 9 a.m.