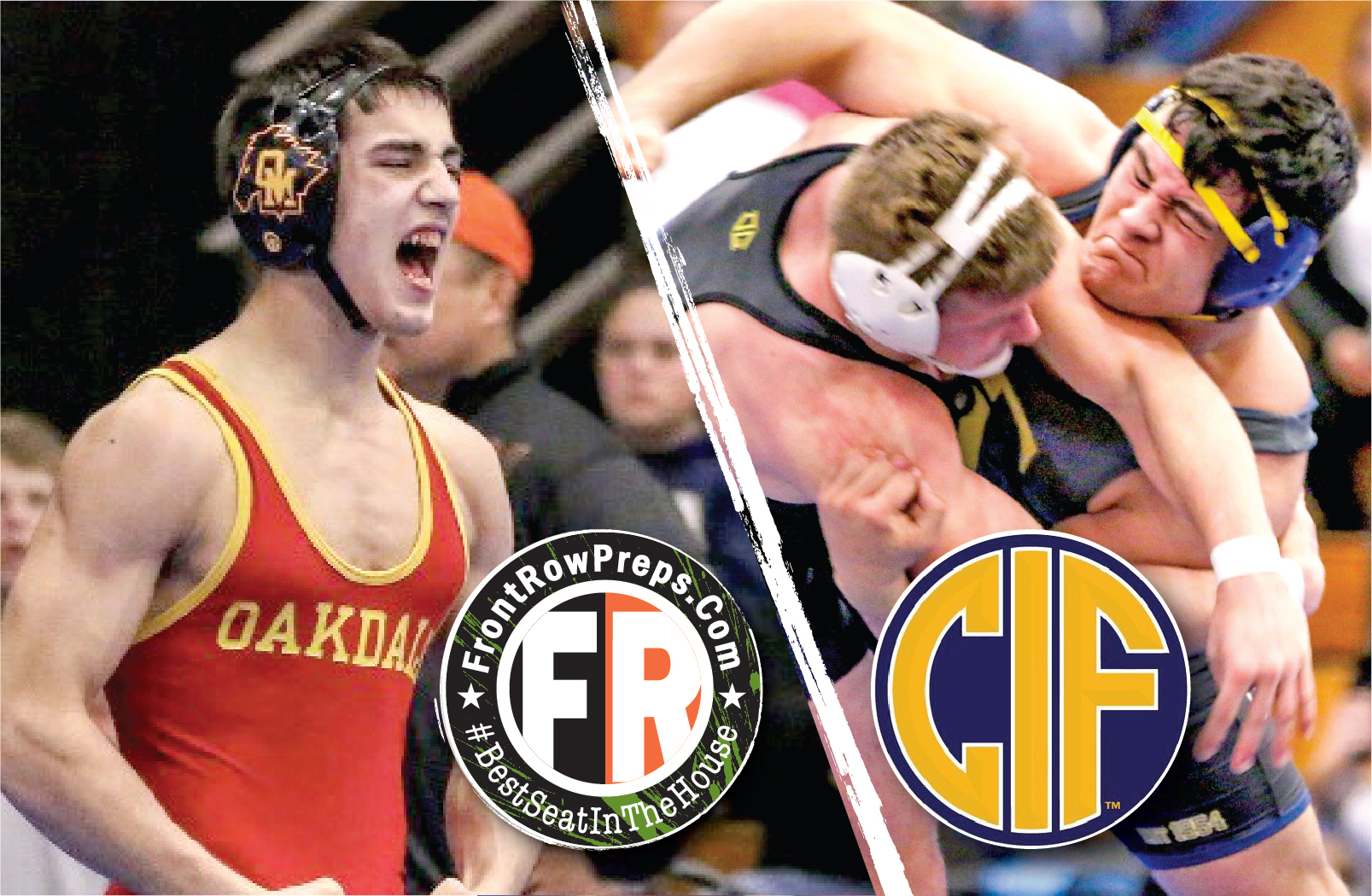 Bracket by bracket: Rating chances of the 53 local qualifiers at state wrestling

The Selma High girls and the Buchanan boys of Clovis have dominated the past three years of the CIF Wrestling Championships.

Both Selma and Buchanan will pursue their fourth straight team titles when the state tournament goes coed for the first time Thursday through Saturday at Bakersfield’s Rabobank Arena.

Selma of Fresno County has taken over in the girls division, in fact, since Enochs High’s memorable state title in 2015.

The girls fill brackets of 32 and kick off competition Thursday at 9 a.m., followed by the boys and their pigtailed 40 in each class at 1 p.m.

The Sac-Joaquin Section sends its top six finishers in each weight from last week’s Masters Championships. There are 53 local qualifiers – 24 girls and 29 boys.

The boys need a reboot.  No SJS male has won a state title since 2015, a surprising drought.

Here are class-by-class capsules, starting with the girls:

106: Davis sophomore Adrienna Turner topped the SJS last week and is top-seeded over No. 2 Leah Gaitan, a freshman from Yucaipa. On the lower end of the bracket with Gaitan is Gregori sophomore Amelia Velazquez.

111: Escalon senior Mikayla Vega, fifth in the state at 106 a year ago, nearly won Masters last week but well-traveled freshman Jennifer Soto of Orland scored a takedown in the final moments for a 6-5 decision. Soto is seeded No. 1 while Vega is third. Also in the draw are Enochs senior Trinity Hernandez, Sierra junior Camille Jarmon and Downey senior Abrianna Martinez.

116: There are no area qualifiers in the bracket topped by Norte Vista’s Monica Garcia. Lincoln’s Elysia Urrea, the 106 champion in 2018, would have been one of the favorites but missed Masters last week.

121: Escalon junior Julia Casillas, the runner-up last week to Madison Fonseca of Orland, could see the fourth-seeded Fonseca again in the semis. The No. 1 seed is Ashley Venagas of Mt. Whitney.

131: State competition will be a good learning experience for Ripon freshman Katelyn Cardoza and sophomores Naomi Cortez of Delhi and Pacheco’s Leonor Del Rio. In the lower half of the bracket is Central Valley junior Carla Martinez. The No. 1 seed is Rowland sophomore Cheyenne Bowman, the 2018 champion at 126.

143: Pitman freshman Lilly Freitas (29-0) is seeded third but should be the favorite.  Twenty-six of her wins have come via pin, and she needed only 18 seconds to claim the Masters title last week. Freitas could meet No. 2 seed Francesca Lopresti of Albany in the semis. The top seed is San Fernando junior Gianna Anaya.

150: College Park freshman Amit Elor is the No. 1 seed and La Costa Canyon’s Maddie Kanopka is No. 2. Central Valley senior Brianna Quiroz qualified as the Masters runner-up who lost via pin last week to fourth-seeded Michelle Kamyshin of River City.

170: Vergara (26-0) won’t have to stress over Estrada, who beat her 8-0 in the 2018 final. The Gregori star is seeded second behind defending state champion Adelina Parra of San Fernando. Buhach Colony junior Alejandra Gonzalez is positioned in the lower half of the bracket with Vergara.

106: Oakdale sophomore Brayden Abell hadn’t lost to an in-state opponent all season until he was pinned in the Masters semifinals by eventual runner-up Dylan Maples of Bella Vista. Abell eventually placed third and could see more SJS foes this week as the No. 4 seed. Selma sophomore Richard Figueroa, the No. 1 seed, pursues his second straight state title.

113: Pitman junior Izzy Tubera (26-3), seventh in the state at 106 as a freshman, is the No. 3 seed, a strong comeback after sitting out last year. Tubera could see a familiar rival in Turlock junior William Giron, the No. 11 seed, in the third round. Giron earned an eighth-place medal at 106 last year. In the bracket’s upper half is Oakdale freshman Michael Torres, Rickey’s younger brother. The No. 1 seed is Selma junior Tristan Lujan (fourth last year).

126: Turlock’s Adrian Heras, seeded 12th, could collide with Evan Ivaldi of Del Oro in the third round. Heras, one of the area’s eight Masters champions, decisioned Ivaldi 8-4 last week in the final. The No. 1 seed is Esperanza’s Aaron Nagao, the Southern Section champion. Oakdale freshman Ceasar Garza opens against Central Coast winner Victor Jacinto of Gilroy.

132: Oakdale sophomore Henry Porter, a state finalist in 2018, is seeded fourth. He could face Del Oro’s Brenden Johnson, who defeated Porter in last year’s Masters final, in the third round.  Patterson senior Noah Mirelez, who lost to Porter in OT in a thrilling Masters title match last week, is the No. 6 seed and begins against Steven Krosen of Laguna Hills. Devin Holman, one of two qualifiers from El Capitan’s Central California Conference title team, faces Luke Gayer of Calvary Chapel.

145: No. 11 seed Sammy Silveria, the Pitman junior and Masters champion, is one win away from a potential matchup against fourth-seeded Luka Wick of San Marino. Oakdale sophomore Seth Borba and Beyer senior Jose Estrada are slotted not far away from No. 1 seed and last year’s 138 champion Jaden Abas of Rancho Bernardo. Estrada is the first Beyer state qualifier in several years.

160: Pitman’s Kendall LaRosa, beaten in the Masters final last week by Del Oro’s Noah Blake, joins Blake in the lower half of the bracket. Blake, seeded No. 2, was third in the state last year. El Capitan senior Evan Myrtue meets No. 12 seed Michael Scarponi of Temecula Valley. The No. 1 seed is Matthew Olguin of Buchanan.

170: Oakdale senior Gabe Martinez, a state finalist last year and a Masters champion the last two years, deserved a better seed than No. 8. He’s locked in the same bracket with Central Coast champion Joseph Barnes of Gilroy. Also awaiting down the road is No. 1 seed Trey Munoz of Trabuco Hills. Bret Harte sophomore Kodiak Stephens has a winnable first-round match, and then his next opponent could be No. 4 seed Ryan Cosio of Temecula Valley.

182: Calaveras’ Donivan Giangregorio, the Masters runner-up, probably will face No. 7 seed Javen Jovero of Rancho Bernardo.  Turlock senior Cesar Rocha opens against Oakland Section champion Denzel Mabry, the No. 14 seed. Giangregorio and Rocha are located in the lower bracket, away from the top seed and last year’s 170 state champion Trent Tracy of Frontier. Tracy defeated Gabe Martinez for the title.

195: It’s possible Cody Golding of Oakdale, the No. 4 seed, could face fifth-seeded Peter Ming of Elk Grove for the second straight week. Golding defeated Ming 10-3 in last week’s Masters final. Calaveras senior Elliot Houghten, the No. 11 seed, is two wins away from a collision with Southern Section champion Ben Gould of Valencia. Ryan Reyes of Gilroy, the No. 1 seed, placed third last year.

285: Turlock senior Michael Jeffus, ranked among the state’s top three all season, placed fifth at state last year. He’s earned a do-able draw, thanks to a No. 2 seed. Jeffus is located in the lower bracket along with Vista del Lago’s Justin Ramos. They’re 3-2 with Jeffus edging Ramos 3-2 last week in the Masters final. In the upper half is top-seeded Nic Villarreal of Gilroy, who placed sixth last year.