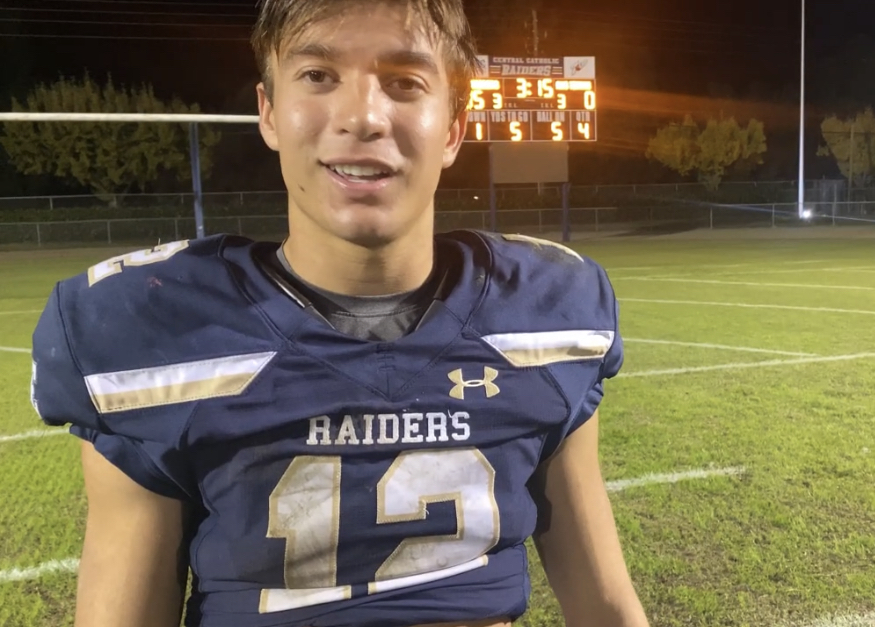 Central Catholic wide receiver Nolan Croasdale stepped inside and then out, rocking his defender off balance at the line of scrimmage and into a trailing position. The rest was a show of speed and athleticism, timing and strong hands.

Sprinting into space, Croasdale left his feet with arms extended in front of him, diving forward to complete a 36-yard reception from quarterback Tyler Paul Wentworth.

Wentworth was flattened by Antelope’s rush just as soon as he let the pass fly, but he was not surprised to learn of Croasdale’s theatrics on the back-end of the play.

“He’s that guy that can make those plays for us,” said Wentworth, who sealed Central Catholic’s 35-0 victory in the semifinal round of the Sac-Joaquin Section Division II playoffs with two fourth-quarter touchdowns.

“He’s electric. That’s the word I’d give for him – he’s an electric player.”

Croasdale, a 5-foot-11 senior who also doubles as a safety and kick returner, is the type of player Central Catholic (11-1) has built an empire upon: A two-way dynamo with a team-first approach. He is the Raiders’ leading receiver despite missing three games during the Valley Oak League season, including pivotal showdowns with Kimball and Manteca.

“It was difficult to watch. It was hard to sit on the sideline. I was eager to get out there,” Croasdale said, but “watching my boys get after it was awesome to watch. Watching everyone step up shows how much depth we got, and it shows we came ready to play.

“As a competitor, though, I was dying to get out there.”

Croasdale has a special place in a run-heavy offense. He and Wentworth are the balance to Aiden "Ponyboy" Taylor and Julian Lopez, a pair of 1,000-yard running backs. Croasdale has a team-best 26 receptions for 534 yards and three touchdowns, but so often in Central Catholic’s run-heavy offense, wide receivers and tight ends are revered for their blocking not their stats.

There is reason to believe that could be changing as the Raiders prepare for Saturday's D-II final with seventh-seeded Monterey Trail (8-5) at Hughes Stadium. Last week, Central Catholic, seeking its 20th section banner, clinched a record 23rd finals appearance with a balanced offensive attack.

Croasdale hauled in three catches for 96 yards, just missing his first 100-yard receiving game in two months. On Sept. 17, Croasdale had a career-high 172 yards on eight catches in Central Catholic’s only loss, a 28-21 setback to Bellarmine College Prep.

Croasdale played in two more games – a 51-0 drubbing of Weston Ranch and a 32-14 win over Oakdale, a Division III section finalist – but missed parts of the next three games with a knee injury. Without Croasdale, Central Catholic leaned on its run game to close out an outright VOL title and top seed in the Division II playoffs.

But don’t let the team success fool you. Central Catholic missed his presence. Croasdale’s speed on the perimeter forces defenses to pick their poison: Stack the box and stop the run? Or, send an extra defender toward Croasdale and eliminate the home-run ball?

“When he was gone, it was tough. You lose a lot of speed and the mismatch outside,” said Wentworth, who has completed 54 percent of his throws for 1,302 yards and 11 touchdowns.

“If you put one guy on him, and it's one-on-one, he can beat it any day. You have to put two guys on him constantly. He definitely spaces out the field for us and gives us another threat.”

The kind of threat that will go and get every ball, including those with a little too much air underneath them.

Croasdale’s speed put him in position to haul in Wentworth’s deep throw down the sideline on Friday against Antelope. However, it was his allegiance to the team and its young quarterback that forced him to leave his feet for the full-extension catch.

“We just know when we’re called upon, we got to make a play,” Croasdale said. “We don’t get too many. We know we’re run-heavy. We just got to make a play every time. … I saw TP throw it. I knew it would be a good ball. I couldn’t let him down.”