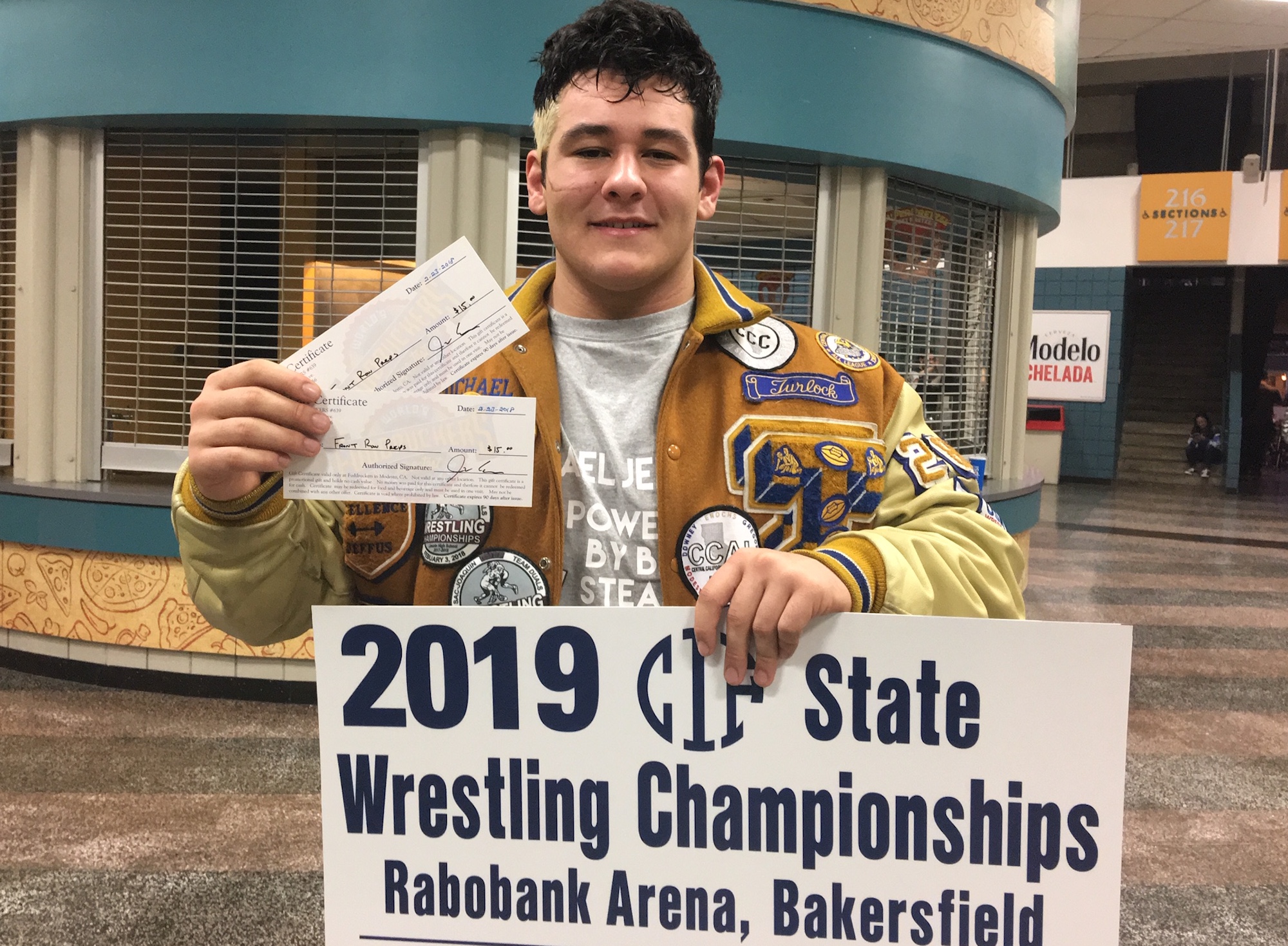 They don’t seem to have much in common at first glance. Jeffus, a Turlock High senior, is bigger than life, a hulk whose shadow can cover small autos. Freitas, a Pitman freshman, is 14, a girl who’s yet to drive a car or ace calculus.

But look again,Turlock residents. Jeffus and Freitas are state wrestling champions. Their stage was the CIF State Championships at Rabobank Arena, and their respective stories would have inspired a country-western hit from the late Bakersfield legend Buck Owens.

Turlock’s odd couple became a story line Saturday night as the first co-ed state meet rolled to a rousing finish.  Escalon’s Mikayla Vega also reached the state finals to climax a season that nearly didn’t get off the ground.

Jeffus (40-3) captured the heavyweight title with a tense 3-2 decision over top-ranked Nicholas Villarreal of Gilroy. Later,Jeffus celebrated by picking up older brother Breck – a former THS wrestler -- as though he was carrying wood to the fireplace.

“I thought I was done,” he reflected in reference to his football-induced knee injury that cost him the season as a sophomore. “All those goals I put up there for myself, I accomplished them.”

Jeffus wears a 71-stitch scar on his right cheek, the residue of a harrowing dirt-bike-into-barbed-wire accident at age 9. He insists the story about him eating a 32-egg omelet is exaggerated.

Jeffus, determined to improve on his fifth-place medal at state a year ago, was all business. He marched into the finals Saturday morning with his fourth win of the season over Justin Ramos of Vista del Lago. And in the title match, Jeffus kept his focus after Villarreal rolled his ankle during a scramble. Moments later, the Turlock football-wrestling star scored the only takedown he needed for the title.

Jeffus’ shoulder aches. He can’t grip much with his left hand because of a sore thumb. His right hand might be worse.  His nonstop campaign from football into wrestling has left him a physical mess. His tonic, of course, is the medal draping his neck.

He became the first Turlock High state wrestling champion since Lewis Gonzalez’s back-to-back crowns in 2004 and ‘05. Gonzalez, a youth coach in Turlock, was there to see it.

“When I first saw him, I thought we might have something with this kid,” Gonzalez said. “Hopefully, it won’t take another 14 years for a state champion.”

If Jeffus’ process was a grind, Freitas – at least to the outside observer – is the opposite. She zooms to top speed. Four female freshmen won state titles at Rabobank, and none of them made it look easier than Pitman’s 143-pound prodigy.

“When I was 7, I used to get medals for reading,” Freitas said. “My brother came home one day with wrestling medals and I thought, ‘I wanna do that.’”

Freitas (33-0) is a nation-wide star. Her strength and versatility draw rave reviews as she collects trophies far from home. The biggest challenge confronting Pitman coach Adam Vasconcellos is to find her training partners or anyone who’ll stretch her skills.

That said, Freitas said her state title – the first by a Pitman wrestler -- was her proudest moment to date.

“It meant a lot with all the girls here for the first time,” she said. “My teammates and my family were here. I just felt the love at this one.”

So did Vega, an Escalon senior who wasn’t sure last fall if she would have a senior season. Beset by motivation issues, she lurched and caromed through the winter. Her 11-4 record speaks to a rocket that didn’t ignite until the last month.

Vega’s talent is not in question.  She placed fifth at 106 last year and, once she found new energy with Escalon girls coach Johnny Costa, she regained her rhythm.

“I was in a zone the last two days,” she said. “When I won in the semifinals (a pin over No. 2 seed Danielle Garcia of Corona), I was so surprised. She mauled me in the first round last year.”

Vega struggled in the 111-pound title match and was pinned in the first round by Orland’s Jennifer Soto, one of the precocious freshmen. The week before at the Sac-Joaquin Section Masters final, Vega came within about 20 seconds of beating her.

“I felt the pressure from everywhere,” Vega admitted. “Those lights were shining down on the two mats and the whole crowd was right there. I knew that people at home were watching me on live-streaming.”

State meet pressure can do that to the best. Which is why Jeffus and Freitas deserve a salute. They turned Turlock into a wrestling capital in one memorable night.

A key to the city for both.